Michael Mohan’s “The Voyeurs” is fairly good at being trashy. It’s not confident, so much as mighty hip to how Amazon viewers won’t shut off its tap of indulgent horniness mid-stream, and ipso facto the movie feels primarily engineered for provocative rushes—the kind that come from characters doing something outrageous, the kind that come from watching hot people have what Roger famously called “rumpy-pumpy,” the kind that make you roll your eyes heavily, but keep watching. Even with its gaps of intrigue and overly superficial touches, its storytelling just wants a reaction, constantly. It often gets one. “The Voyeurs” is not a passive experience.

Mohan’s story kicks off with a forbidden fruit of living in a city—getting a window into other people’s sex lives. Pippa (Sydney Sweeney) and Thomas (Justice Smith) have just moved into a large flat in Montreal, and directly across from them is some type of gorgeous artsy couple. Soon into their move, they see the couple have some real software action, causing Pippa and Thomas to guffaw, and then watch. On another night, it happens again, and in a scene that marks a peak for the sexual excitement, the two voyeurs add some virtual reality to the mix.

The couple next door having sex are Seb (Ben Hardy) and Julia (Natasha Liu Bordizzo), a former model who left behind that life. Hardy is sincerely cheesy in the role that has him being an overly sexual photographer; whose photoshoots with other women cause nosey neighbors Pippa and Thomas to think they’re witnessing cheating. (The question of a possible open relationship is raised by our nosy neighbors, and then blatantly shut down.) Suddenly they realize they’re not witnessing a hot sex life but a lie that comes with a gaslighting, abusive partner. Pippa’s closeness to this story across the way compels her to say something, and that proves to be a big mistake.

“The Voyeurs” offers a formidable roster of feelings, starting with how Sweeney depicts the curiosity, the seduction of looking, of wanting to live inside the projection put upon someone whose sex life is enhanced with a binocular's aim. The script also gives her ample time to be funny and playful, opposite Justice Smith’s more low-key, less amused boyfriend who enters into the movie wanting to get an accordion. Their chemistry is sexy when needed, but also a little goofy, like when they try to obtain a crafty audio connection at the neighboring apartment via the incognito of a costume party. It’s more when things between the two fall apart that “The Voyeurs” struggles to create a potent, emotional core. We care more about the two as actors, finding their way through this story, than we do as characters whose initial fixation starts to eat away at their own chemistry.

Mohan’s film goes to some bizarre emotional depths, and channels in coincidences (Pippa’s job happens to involve eyesight, of all things). It tries to have fun with how the characters are in some type of ridiculous illusion that only we are aware of. Notice the poster for Michelangelo Antonioni's “Blow-Up,” a similar far more well-rounded movie about witnessing life from afar, through lenses. Or listen to nudge-nudge-nudge simple exchanges like this: “I didn’t think you’d come.” “I came.” That scene happens at an art gallery. Even the abrupt cuts are so on the nose it's kind of a comfort, like every time an eyeball is matched with a sliced egg drooling yolk. The movie has a sense of humor about itself, whether or not it seems fully in control of the story that it’s trying to pull over its viewers. Some passages are not accidentally dull here, they’re just dull.

No spoilers here about the juiciest parts of “The Voyeurs” but they come in the second and third act, when it stares back at you. And this is when the story gets the most about its playful pokes at privacy, of Sydney Sweeney’s agency as an actress who has been engaging how we perceive her since playing a sexualized high schooler in “Euphoria.” The movie begins with the camera trying to get a glimpse of her in a dressing room, only to feel like we’ve been caught when she suddenly makes eye contact; it then becomes a clearly laid out meta commentary on her own career, one that asserts agency as Sweeney becomes even more powerful with projects such as these. (That aspect is more discernible than the movie’s tangled message about sex and privacy.) So much of “The Voyeurs” is about power, and who is in control of the narrative. It becomes evident that at least Sweeney is.

Especially in its third act, as "The Voyeurs" lumbers toward the end of its two hours, the movie engages in some stunt storytelling, some twists for the sake of twists. But they’re big, and Mohan makes them just believable enough in this world that becomes more perverse with each new perspective. "The Voyeurs" craves to be the most salacious, outrageous non-pornographic movie you stream this weekend, and that itself is enticing. But it's a noteworthy bonus that while giving you some gratuitous page-turning thrills, Mohan also pushes extremes of art, sex, and death, and dares to go more than skin-deep. 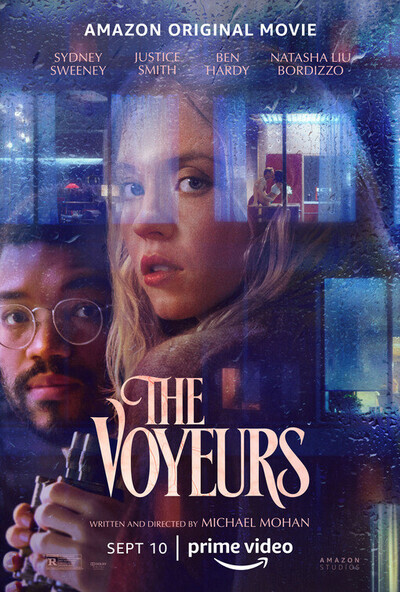