The talents of Alicia Vikander and Eva Green are stranded by the monotonous “Euphoria,” a movie that doesn't have the gut-punch of rich character work so much as the hollow spectacle of seeing actors be great at looking sad. The two could tear your heart out using only the ingredients of bubble gum for dialogue, and yet "Euphoria" gives them very little, pairing them as two sisters grieving one's upcoming death. Though this all takes place within the unexpected setting of a sunny death retreat, "Euphoria" struggles to be little more than a hum-drum meditation on kicking the bucket.

Emilie (Eva Green) is in the late stages of cancer, something that her artist sister Ines (Alicia Vikander) does not fully comprehend until they meet for the first time in years. Ines also doesn’t know where exactly Emilie is taking her in the opening minutes of the movie, as they’re driven out of the country and to a wooded area. A docile Charlotte Rampling, acting as a type of host, welcomes them and walks them to a type of utopia: a peaceful lakeside estate, where people lounge around in the sun, attended to by men and women in robes. The clients here have all made the same choice, to spend their last few days here, and the program is dedicated to accommodating them as much as possible.

It’s a strange new reality for Vikander’s Ines, who resists the concept for a number of reasons, including a nihilism that comes out of her when conversing with another client (played by Charles Dance). But with its series of quiet conversations, creating a type of forced therapy, the movie is ultimately about Ines accepting the inevitability of her sister’s death. Ines not leaving Emilie behind is a gesture of that—she can’t escape this as with other family moments. Ines has to sit with it for these docile days, and so do we.

"Euphoria" is an exercise in watching two visibly pained characters discuss the problems they have long avoided, in this case a collective trauma regarding their mother and their strained relationship. To set this type of push-and-pull dramatic experience among a death camp is compelling, but writer/director Lisa Langseth can't get past the surface of the sisters' woes. We understand their pain because they talk about it, but they are too little defined by anything other than their trauma, hinting at a past without cutting deep. Vikander is gravely pensive and ready to burst; Green is fading, and it’s a tragic sight. They wrestle with their past, and also Emilie's limited present, but as observers it feels too obvious.

Langseth has a high-concept idea about death that the film seems to only elaborate on visually. Stolen moments show a string quartet one night, and fireside poetry reading on another. This place brings in a gentle tone and is already a type of heaven, once you get over that this indeed is not a cult. Everyone gets to be happy: a whole sequence is even dedicated to Charles Dance’s character dancing and rockin’ out to a Beatles-esque band that entertains on the front steps of the lakeside mansion. A sense of place is created, but not so much a lasting sense of its significance. 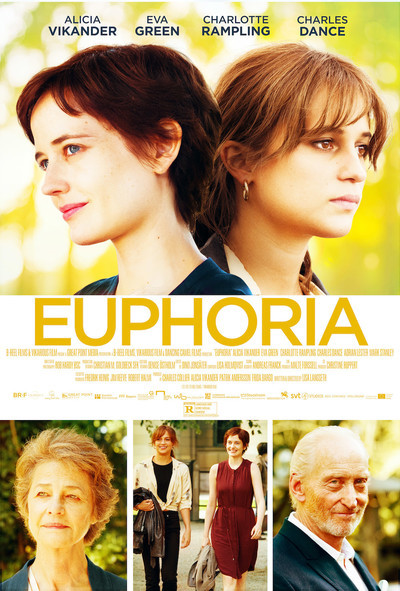