Who can even remember what happened in 1993? We're going out on a limb and guessing Steven Spielberg. Not only did "Jurassic Park" become the highest-grossing film ever at that time, but his World War II drama "Schindler's List" won the Oscar for best picture.

As fate would have it, there is another list movie opening this very weekend: "The To Do List," which takes place during the summer of 1993. It, however, involves a different sort of itemizing.

It's doubtful that this occasionally riotous, often raunchy and overtly ragged boundary-breaking sex farce set during the first year of the Clinton administration will be in the running for Academy Award recognition. However, considering that 20 years ago the most popular comedy was "Mrs. Doubtfire" with Robin Williams in matronly drag, it does offer proof that there has been some evolution at the movies in the ensuing two decades. At least "The To Do List"'s leading lady is an actual woman in the form of the whip-smart and whippet-lean Aubrey Plaza (TV's "Parks and Recreation"), who manages to merge the gangly allure of a young Mackenzie Phillips with the deadpan appeal of MTV's animated anti-heroine Daria.

But the filmmaker's choice of a pre-Internet time period is mainly a practical one. That way Plaza's Brandy, a Boise, Idaho, high-school valedictorian with a nosebleed-high GPA but with miniscule romantic experience can't just Google her way to a sexual education during before she enters college. Instead, she has to experience it all herself—step by step, inch by inch in the same clinical, methodical way that the Mathlete approaches her academic studies and everything else in her overly regimented life.

These sorts of antics are common to such dude-centric fare as "Animal House," "Porky's," "Risky Business" and "American Pie" but not so much in female funny business—and that is the point. Let's just say Brandy's graphic awkward encounters with the opposite sex make the cafeteria carrot scene from 1982's "Fast Times at Ridgemont High," which back then put the crude in crudité thanks to a game Phoebe Cates, seem rather tame.

Plaza—a unique comic presence who seems to covet every opportunity to embarrass herself—goes about Brandy's journey not like some starry-eyed Baby in "Dirty Dancing," but as a curious academic. That reduces the ick factor and ups the laughs enormously. The flaw of the approach? "The To Do List" settles for surface and cartoony rather than deep and heartfelt, despite its inclusion of a "Beaches"-inspired sing-along to "The Wind Beneath My Wings" that the film hasn't quite earned.

Luckily, Brandy has an eclectic pool of hot-to-trot guys who are all too glad to assist with her project—a literal pool, in fact, that acts as her place of summer employment. The actors who serve as paramours along with the rest of the supporting cast seem designed to appeal to every comedy demographic. Scott Porter ("Friday Night Lights") has a good time as the sun-bleached Adonis who ignites Brandy's libido and Johnny Simmons ("Scott Pilgrim vs. the World") is dorkishly sweet as her longtime and previously ignored admirer.

In addition, there is Christopher Mintz-Plasse of "Superbad," Donald Glover of "Community," Rachel Bilson of "The O.C." as Brandy's sex-savvy older sibling and Andy Samberg of "Saturday Night Live" as a self-adoring grunge rocker.

A shout-out must go to the over-30s who dive right in without a life vest, including "SNL"'s Bill Hader (Carey's husband) as a loser pool manager; Connie Britton ("Nashville") as Brandy's free-spirited enabler mom who probably would pack tubes of lube in her daughter's lunch if she could, and the Marvel universe's Agent Coulson himself, Clark Gregg, as the heroine's uptight dad.

A certain sloppiness prevents "The To Do List" from entering the female coming-of-age pantheon of "Sixteen Candles," "Clueless" and "Mean Girls." Is it nit-picky to point out that Brandy forgets to cross hickeys off her list after she is shown proudly sporting a necklace of bruises? Perhaps. Just place "The To Do List" under the category of a fling rather than a classic. As the movie says, "Sex is a big deal, but not always a big deal." 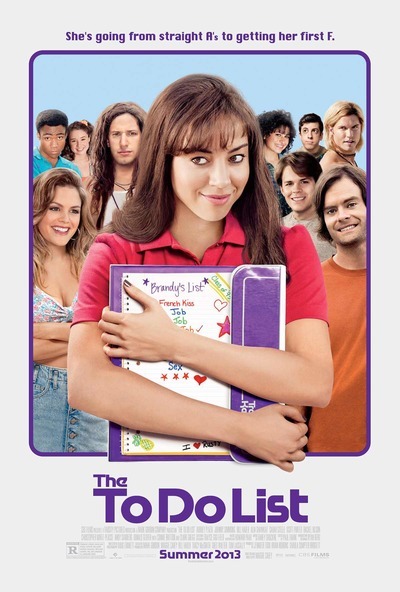