“Porky’s” is another raunchy teenage sex-and-food-fight movie. The whole genre seems fixated on the late 1950s and early 1960s, when the filmmakers, no doubt, were teenagers. Do today's teenagers really identify with jokes about locker rooms, Trojans, boobs, jockstraps, killer-dyke gym coaches, and barfing? Well, yes, probably they do. Teenagers seem to occupy a time warp of eternally unchanging preoccupations. Hollywood originally entered that world with a certain innocence in the late 1950s with Pat Boone and beach party movies. That innocence is now long, long ago. Since “American Graffiti,” “National Lampoon’s Animal House,” and “Meatballs,” the A.C.N.E.S. movie has turned cynical. You remember what A.C.N.E.S. stands for. It's an acronym for any movie about the dreaded Adolescent Character's Neurotic Eroticism Syndrome.

In fact, the strangest thing about “Porky’s” is how much it hates women. The only close friendships in the movie are between men. The movie even takes certain scenes that are usually cliches for female characters and assigns them to men. For example, you can hardly make a movie like this without a scene in which someone's caught nude in public. Remember "Hot Lips" in “MASH”? In “Porky’s,” it's a kid named Pee Wee. He's caught with his pants down, chased into the woods, picked up by the cops, and deposited at the local drive-in hamburger stand, where he poses like September Morn.

Since the movie doesn't like women, its sex scenes all create fear and hostility, which prevents them from being funny (sex scenes about fear and hostility, on the other hand, can be very funny). Even in an easy scene like the one where the guys spy on the girls in the locker room, the director, Bob Clark, blows it. Peeping Tom scenes can be very funny (remember John Belushi on the ladder in “Animal House?”) Here, it's just smarmy. There's one other problem. None of the male actors in this movie look, sound, or act like teenagers. They all look like overgrown preppies at their fraternity pledge class's fifth reunion. Jokes based on embarrassment never work unless we can identify with the embarrassed character. Here, the actors all seem to be just acting.

I see that I have neglected to summarize the plot of “Porky’s.” And I don't think I will. I don't feel like writing one more sentence (which is, to be sure, all it would take). 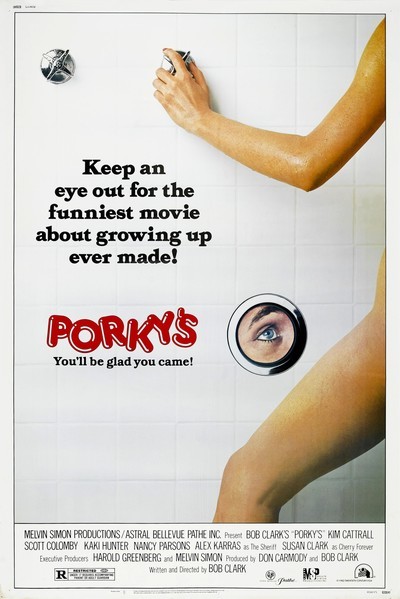