How could they do this to Jennifer Jason Leigh? How could theyput such a fresh and cheerful person into such a scuz-pit of a movie? Don'tthey know they have a star on their hands? I didn't even know who Leigh waswhen I walked into "Fast Times at Ridgemont High," and yet I wascompletely won over by her. She contained so much life and light that she was ajoy to behold. And then she and everybody else in this so-called comedy isinvited to plunge into offensive vulgarity.

Let me make myself clear. I am not against vulgarity as asubject for a movie comedy. Sometimes I treasure it, when it's used withinspiration, as in "The Producers" or "National Lampoon's AnimalHouse." But vulgarity is a very tricky thing to handle in a comedy; toneis everything, and the makers of "Fast Times at Ridgemont High" havean absolute gift for taking potentially funny situations and turning them intogeneral embarrassment. They're tone-deaf.

The movie's another one of those adolescent sex romps, such as"Porky's" and "Animal House," in which part of the humorcomes from raunchy situations and dialogue. This movie is so raunchy, however,that the audience can't quite believe it. I went to a sneak preview thrown by arock radio station, and the audience had come for a good time. But during ascene involving some extremely frank talk about certain popular methods ofsexual behavior, even the rock fans were grossed out. There's a differencebetween raunchiness and gynecological detail.

The movie's cast struggles valiantly through all this dreck.Rarely have I seen so many attractive young performers invited to appear in somany unattractive scenes. Leigh, for example, plays a virginal young student atRidgemont High. She's curious about sex, so the script immediately turns herinto a promiscuous sex machine who will go to bed with anybody. And then hersexual experiences all turn out to have an unnecessary element of realism, sothat we have to see her humiliated, disappointed, and embarrassed. Whateverhappened to upbeat sex? Whatever happened to love and lust and romance, andscenes where good-looking kids had a little joy and excitement in life, insteadof all this grungy downbeat humiliation? Why does someone as pretty as Leighhave to have her nudity exploited in shots where the only point is to show herill-at-ease?

If this movie had been directed by a man, I'd call it sexist. Itwas directed by a woman, Amy Heckerling -- and it's sexist all the same. Itclunks to a halt now and then for some heartfelt, badly handled material aboutpregnancy and abortion. I suppose that's Heckerling paying dues to somemisconception of the women's movement. But for the most part this movie justexploits its performers by trying to walk a tightrope between comedy andsexploitation.

In addition to Leigh's work, however, there are some other goodperformances. Sean Penn is perfect as the pot-smoking space cadet who has beenstoned since the third grade. Phoebe Cates is breathtaking as the moreexperienced girl who gives Leigh those distasteful lessons in love. JudgeReinhold has fun as a perennial fast-food cook who rebels against the sillyuniforms he's supposed to wear. Ray Walston is suitably hateful as thedictatorial history teacher, Mr. Hand. But this movie could have been a lotmore fun if it hadn't chosen to confuse embarrassment with humor. Theunnecessary detail about sexual functions isn't funny, it's distasteful.

Leigh looks so young, fresh, cheerful, and innocent that wedon't laugh when she gets into unhappy scenes with men -- we wince. The wholemovie is a failure of taste, tone, and nerve -- the waste of a good cast onerratic, offensive material that hasn't been thought through, or maybe eventhought about. 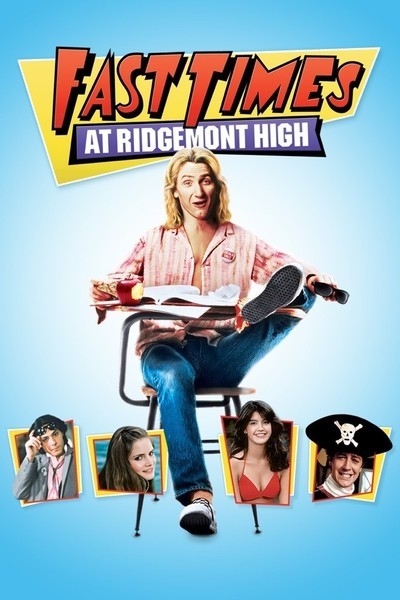