The Nut Job 2: Nutty by Nature

Like any genre, the quality of animated features rises and falls with the Hollywood tide. Sometimes, we are lucky to be rewarded with “Inside Out,” an instant-classic exploration of human emotions. Other times, we get a reflection of the year in progress—namely, that film’s brainless cousin, “The Emoji Movie.” While much has been written about a spate of lackluster blockbusters this summer, little has been said about the dearth of mainstream standouts among ‘toon releases so far. “The Lego Batman Movie,” built upon the toy universe already introduced in “The Lego Movie,” has its fans and those who love the book series embraced “Captain Underpants.” But if the best that critics could say about “Cars 3” was that it wasn’t as bad as its predecessor, that is a very low bar from which to judge.

So along comes “The Nut Job 2: Nutty by Nature” to push that bar ever downward. Never for a second did I think the original film—which basically co-opted Scrat’s single-minded pursuit of his acorn in the “Ice Age” franchise for its own food-motivated, self-serving lead rodent, Surly Squirrel (abrasively voiced by returnee Will Arnett)—would qualify for a sequel. Maybe only as a punishment for those children who made their parents sit through its predecessor, but that’s it. But here is our second helping, one that is noisier, busier, crasser and more laugh-free than the first outing. Why, you may ask? Money, of course. With a reported budget of $42 million, the Canadian-South Korean-American production grossed over $120 million worldwide—half of it in countries beyond the U.S. and Canada.

Therefore, here we go again, with purple-hued Surly and his fur-bearing posse of chipmunks, groundhogs, moles, woodchucks, beavers and mice spending their days in the quaintly generic town of Oakton City, gorging on a seemingly endless stash of shell-bearing legumes in the basement of the now-shuttered Nut Shop. Looking down upon their glutton-like existence is girl-squirrel Andie (Katherine Heigl, back again), who bemoans their lack of discipline while insisting they should do what comes naturally—namely, forage for food in Liberty Park right across the street. She is supposed to be a moral center, but Andie is mostly a kill-joy nag as she blah blah blahs about being part of a team and the value of hard work—in other words, heavy-handedly injecting a de rigueur message into the proceedings.

Well, before you can say “kaboom,” the store blows up and all the nuts are toast. To feed their starving cohorts, Surly and his mostly silent blue mouse pal Buddy attempt to snatch doughnuts away from, of course, cops and abscond with popcorn found outside a movie theater, but to no avail. Just as the critters attempt to search for sustenance in the park, bulldozers and construction workers suddenly descend upon the oasis of greenery. That is because the town’s corpulent wealthy mayor (Bobby Moynihan) is a greedy and corrupt politician who disdains rules and cares little about the environment—big game trophy heads bedeck the walls of his ornate home—after previously turning a public space into a golf course. He now has plans to turn Liberty Park into a very profitable and unsafe amusement park by cutting every corner he can. If this sounds familiar, I am guessing it isn’t a coincidence.

Surly and the others join forces as they try to sabotage the crews destroying the property. But the mayor hires an animal control company to keep them at bay and his evil plot to make money while endangering lives by installing faulty rides continues apace. Will our heroes, such as they are, fight back? And will one of them accidentally fall into a coma and inspire a supposedly touching flashback about the value of friendship? And will that moldy oldie “Born to be Wild” become the go-to tune for each round of loud and violent mayhem? Yes, yes and yes.

Let’s look on the bright side. The running time is barely 90 minutes. And there are but three fairly amusing characters who save this inferior attempt at family entertainment, at least for me. Once again, Maya Rudolph is a highlight as Precious, a bug-eyed pug with a penchant for licking the fur of fellow beasts. Here, she is rewarded with a French bulldog beau named Frankie who is so besotted by her, he regurgitates his food so she won’t go hungry. OK, that's gross. But the fact that Bobby Cannavale provides his voice and probably influenced his pooch’s handsome visage sort of makes up for it. Plus, I laughed every time he says that, like Brangelina before them, he and Precious are “Fracious.”

Then there is the delight of hearing Jackie Chan voice Mr. Feng, a wee Asian mouse and martial-arts master who abhors being called cute while preferring to be known as “a weapon of mouse destruction.” He and his look-alike army partly redeem a protracted last face-off with their cleverly animated kung-fu moves.

But whatever charm this trio provides is snuffed out by two off-putting human creatures—the mayor’s bratty, belligerent daughter (Isabella Moner) who shrieks most of her lines while making Veruca Salt seem like a paragon of propriety and the main animal control officer (Peter Stormare of “Fargo” bad-guy fame) who, for whatever reason, references “300” when he tells his troops, “Tonight we dine on squirrel.”

Alas, resistance is basically futile at this point, since “The Nut Job 3,” also directed by No. 2’s Carl Brunker, is already in pre-production according to IMDb. I'm just hoping the subtitle will be “Release the Cracker.” 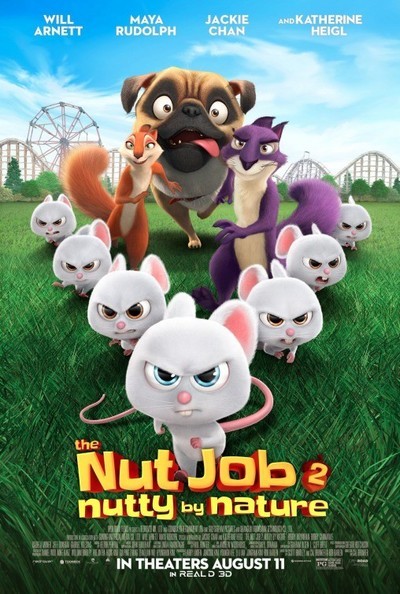 Will Arnett as Surly

Bobby Moynihan as The Mayor