Since “Toy Story” became an enormous box-office hit and a beloved modern masterpiece by giving audiences an inspired look at what ordinary toys do when their owners aren’t around, Hollywood has been striving to repeat that seemingly simple formula with a number of animated films that have offered viewers a privileged glimpse at the heretofore unseen existence of everything from the shelves of a grocery store (the execrable “Foodfight!”) to the psyche of a young girl (the stunning “Inside Out”). Now comes “The Emoji Movie,” a film that dares to ask “What goes on in the magical worlds contained within our cell phones?,” a notion that I do not think that anyone has ever pondered for any amount of time outside of those stuck in a focus group at Sony Animation. That is only the first of many problems with this film, a work so completely devoid of wit, style, intelligence or basic entertainment value that it makes that movie based on the Angry Birds app seem like a pure artistic statement by comparison.

The extremely dubious conceit of "The Emoji Movie" is that hidden within the messaging app in our phones is a teeming metropolis known as Textopolis, where all of the emojis live and wait to be called upon by their owners to say what mere words cannot. All emojis are supposed to have only one facial expression but Gene (T.J. Miller), who is supposed to be a “meh” like his parents (Steven Wright and Jennifer Coolidge), is just so darn exuberant that he is unable to stick with just one expression. This becomes a problem when his phone’s owner, a 14-year-old boy named Alex struggling to reach out to the girl that he likes, selects Gene for a text he is sending to her—Gene chokes at the last second and coughs up so many expressions that it is impossible to understand what he is supposed to represent. Discovering his secret and fearing what it could mean for everyone if one emoji seems to be malfunctioning, Smiler (Maya Rudolph), the always-grinning leader of Textopolis, decides to have Gene wiped out for good.

Gene manages to escape Smiler’s clutches and with the help of another outcast emoji, the once-popular Hi-5 (James Corden), he hits upon a plan to have himself reprogrammed to show only one expression so that he can finally fit in. The only emoji who can do this for him is master hacker Jailbreak (Anna Faris), who agrees to help him if he will come with her on a journey to the fabled Cloud, where his ability to change expressions could help her get past the impenetrable firewall protecting it. Their journey across the phone takes the three to a number of different apps and along the way, they learn valuable lessons about Being Yourself and Friendship and the like while being pursued by Smiler’s troops, who have all been outfitted with illegal upgrades to make them extra-powerful. To make matters worse, Alex, having grown increasingly annoyed by the glitches inadvertently caused by Gene’s journey, has made an appointment to have his phone and everything contained within completely erased.

So what wonders lie just beneath our touch screens, anyway? Based on the evidence put forth by “The Emoji Movie,” it is a combination of product placement and corporate synergy. Textopolis itself is an indifferently conceived and executed cityscape populated by any number of familiar emojis, the most famous of which is presumably Poop, who is voiced by none other than Sir Patrick Stewart in one of his less dignified gigs. Once we get outside the walls of Textopolis, we are essentially placed into a series of mini-ads for well-known apps that range from brief detours to the lands of Facebook and YouTube to extended commercials for the Candy Crush and Just Dance games. Since nothing of import goes on during these scenes (or any others, for that matter), I found myself speculating on which ones spent the most money to appear in the film based on the length of their exposure and the praise that they receive from the characters. Based on the available evidence, Dropbox must have been the big spender here—not only is it the all-important gateway to the Cloud but the characters manage to safely hide out from the bad guys there because, and I quote, “they are illegal malware and this app is secure.” Then again, my guess is that the film could have gone into profit solely from taking money from companies eager to keep their apps as far away from this as possible.

The failure of imagination in “The Emoji Movie” is not limited to its depiction of the app world. This is a film that has literally nothing to offer viewers—there are no moments of humor, excitement or insight regarding a culture that considers emojis to be the pinnacle of contemporary communication. The actors go through their lines with such a lack of enthusiasm that they make Krusty the Klown seem focused and committed by comparison. The message about the importance of Being True To Yourself rings exceptionally hollow considering that there is not a single thing here that has not been blatantly taking from other, better films. In fact, the only factor about the screenplay that is remotely surprising is the presence of Mike White, the acclaimed writer of the likes of “School of Rock” and “Beatriz at Dinner,” as one of the credited screenwriters. How to explain his participation in a project as lame as this? My guess is that, as the most powerful and popular emoji of all, the Poop emoji demanded he be brought in to punch up his dialogue.

“The Emoji Movie” is a demonstration of artistic abdication at its most venal, but will the kids like it? To that question, I offer this observation. This past weekend, I played ersatz uncle by taking two adorable girls of my acquaintance—10-year-old Mamie and 4-year-old Danger (actually, that is her middle name and I swear I am not joking)—to see Hayao Miyazaki’s 1989 favorite “Kiki’s Delivery Service” on the big screen in a nearly-full theater that contained a lot of families with small children. The kids didn’t know they were seeing a masterpiece but were so caught up in the story and the gorgeous visuals that you could hear a pin drop in the auditorium. By comparison, at the screening of “The Emoji Movie” I attended, there were plenty of kids but judging by the shifting in seats, rustling of candy bags and the lack of laughter, they did not seem to be into it at all. “The Emoji Movie” may be as depressing of a film experience as anything to come out this year but if the reaction of the kids that I saw it with is any indication, there may be hope for the future after all. 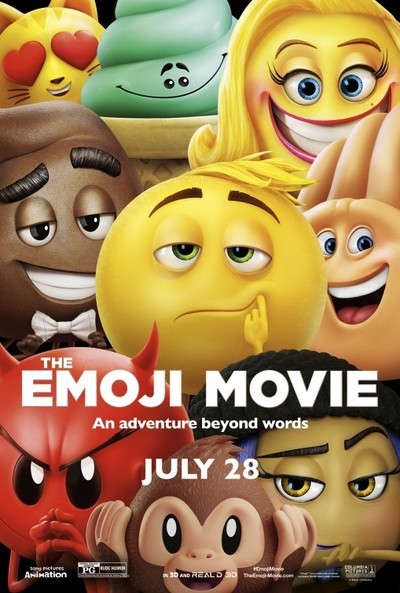