By now you’ve probably read a number of scathing reviews of “The Mummy,” Universal’s inaugural entry in a possibly grievously ill-advised “Dark Universe” franchise, wherein the legendary studio intends to reboot its most Famous Monsters of Filmland. Perhaps I’m becoming jaded in my old age, but I was more amused than appalled.

Don’t get me wrong. “The Mummy,” directed (if that’s what you want to call it; I honestly think the better term here is “ostensibly overseen on behalf of the studio executives”) by Alex Kurtzman from a script by David Koepp, Christopher McQuarrie, and Dylan Kussman, has plenty to get irritated about. I got sand in my synapses during an early scene in which Tom Cruise, as a looter named Nick Morton (oh, “Mort,” I get it now), and his sidekick, played by Jake Johnson, casually slaughter a bunch of “Iraqi insurgents” trying to track down a mysterious treasure. Oh, sure, filmmakers, by all means use a tragic and unnecessary war that’s still yielding horrific consequences for the world as the backdrop for your stupid horror movie plot machinations, no problem here.

And, of course, there’s the movie’s very old-school sexism. "The Mummy" has two female characters: One is corrupt albeit not unattractive ancient Egyptian royal Ahmanet, who, once freed from her tomb in the present day, is the incarnation of all evil and stuff. (She is played by Sofia Boutella, whose filmography testifies that she’s accustomed to being ill-used in motion pictures). The other is faux-archeologist/genuine anti-evil secret agent Jenny (Annabelle Wallis) who’s mainly around to be rescued by Nick, and whose surface venality suggests that his business card describes him as a “lovable rogue.”

So yes, should one choose to take offense, one certainly may. But I have to be honest—speaking of venality, I found something almost admirable about the film’s cheek. It’s amazingly relentless in its naked borrowing from other, better horror and sci-fi movies that I was able to keep occupied making a checklist of the movies referenced. At its opening, remnants of a past civilization are discovered while workmen are tunneling underground for a new subway route. That’s from “Quatermass and the Pit,” aka “Five Million Miles to Earth.” As many other reviewers have noted, once Jake Johnson’s character buys in and is reborn as a wisecracking undead sidekick warning Nick about how he’s been cursed by incarnation-of-evil Ahmanet, it’s “American Werewolf in London” time, albeit with PG-13-rated special effects rather than the side of ketchup-dipped corned beef that fell from Griffin Dunne’s face in the earlier movie. What else? A woman whose kiss drains the life force out of those who receive it, from the wacky space-vampire movie “Lifeforce”? Check. A brain-draining insect in the ear from “Star Trek 2: The Wrath of Khan”? Check. Spavined slapstick undead assaulters out of “Evil Dead”? Check. Underwater fights with the undead out of Lucio Fulci’s “Zombie”? Check. (These too are toned down considerably from the source material.) Someone saying “Plans?” with the precise intonation Sir Ralph Richardson used in “Tales from the Crypt”? Also check. Don’t even get me started on the, um, appropriation of a famous line from the Universal monster movie “Bride of Frankenstein.” But that’s life, and that movie literally IS Universal’s property.

There have been a lot of crocodile tears already shed about the fact that The Mighty Tom Cruise has allowed himself to be used in such dreck, and also that Russell Crowe has been compelled to continue to sink into a form of self-parody by appearing as the head of Jenny’s anti-evil agency, a character named Dr. Henry Jekyll, and yeah, it’s the same guy. Or some iteration of the same guy. As it happens, Dr. Jekyll was never one of the Universal Studios monsters, but the character IS in the public domain, so I guess the corporate overlords of the Dark Universe figured “what the you-know-what.”

Anyway, I cannot feel too aggrieved for either star. As Richard Harris and Richard Burton found out for themselves many years before Crowe came along, there comes a time in the career of every loose-cannon macho actor where the any-port-in-a-financial-year-storm approach to career management is all for the best. As for Cruise, he is known for his try-anything-once sense of cinematic adventure, and he does like his franchises. The Morton character is admittedly more of a callow nothingburger than any he’s played. And given how the movie ends I’m a little disappointed that he wasn’t named Larry Talbot. But who knows, maybe he’ll be obliged to change it for the next installment. Which I am looking forward to, out of nothing but base curiosity. 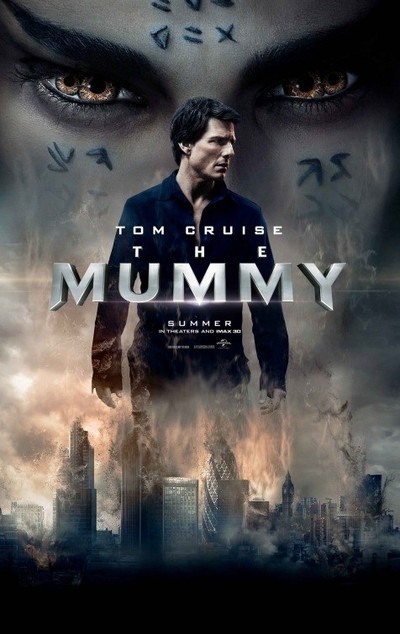 Rated PG-13 for violence, action and scary images, and for some suggestive content and partial nudity.