To a new world of gods and monsters.

So intones Dr. Praetorious to Dr. Henry Frankenstein, toasting their new friendship with a glass of gin ("my only weakness") before proposing a partnership. He unveils a series of miniature living humans, each in its own bell jar: Homunculi, he says, which point the way to full-scale experiments in the creation of life. "Alone," he tells Frankenstein, "you have created a man. Now, together, we will create his mate."

Their quest forms the inspiration for James Whale's "The Bride of Frankenstein" (1935), the best of the Frankenstein movies--a sly, subversive work that smuggled shocking material past the censors by disguising it in the trappings of horror. Some movies age; others ripen. Seen today, Whale's masterpiece is more surprising than when it was made because today's audiences are more alert to its buried hints of homosexuality, necrophilia and sacrilege. But you don't have to deconstruct it to enjoy it; it's satirical, exciting, funny, and an influential masterpiece of art direction.

Whale has long been valued by admirers of 1930s horror films, but in 1998, with the release of the biopic "Gods and Monsters," based on the novel Father of Frankenstein by Christopher Bram, his life was credited with a new significance. In an era when Hollywood was filled with homosexuals who stayed adamantly in the closet, he was portrayed as openly gay--not only in his life, but in his work. This view may have involved wishful thinking; biographers such as Anthony Slide say Whale was "a very private man who kept his personal life to himself," but that doesn't fit the thesis of critics such as Gary Morris, who interpret "Bride" as a bold gay parable. Morris' reading is sometimes torturous (are the Monster and the blind hermit a model for a "blissful married couple"?), but he may be right to see Praetorious and Frankenstein as the Monster's same-sex parents ("Henry the father in giving it life, Praetorious a mother-figure who nurtures it"). Praetorious (played by Ernest Thesiger in high camp overdrive) indeed sometimes seems to relate to the Monster as rough trade. Parable or not, the movie is more fun when its insinuations are allowed to glide beneath the surface as an unspoken subtext.

The film works perfectly well on its own terms, as a sequel to Whale's "Frankenstein" (1931), recasting the Monster as an outcast yearning for friendship. The credits for "Frankenstein" said it was inspired by a novel by "Mrs. Percy B. Shelley." "Bride" improves the billing of the feminist heroine, calling her "Mary Wolstonecraft Shelley" and adding a prologue in which Mary; her husband, Percy, and their friend Lord Byron imagine a sequel to the first story: The Monster survives being burned in a mill and staggers forth, alive and misunderstood.

Elsa Lanchester plays Mary Shelley and also has the unbilled role of the Bride--where she provides one of the immortal images of the cinema with lightning-like streaks of silver in her weirdly towering hair. Whale based the film's look on the stark shadows and jagged tilt shots of German Expressionism (from such horror films came the look of film noir in the 1940s). His inspiration for the Bride was Maria, the artificial woman from Fritz Lang's "Metropolis" (1927)--where he also borrowed ideas for Praetorious' laboratory, with its platform that lifts the Bride up to the heavens to be penetrated by lightning bolts. (Mel Brooks' laboratory for Praetorious in the 1975 "Young Frankenstein" is not merely similar--it uses the same props, which he discovered in storage.)

The central figure of the film is, of course, the Monster (which is not named Frankenstein, despite the movie's title). He is played by Boris Karloff, who in "Frankenstein" got only this credit: Monster.....................? but in the sequel is billed in bold capitals above the title: KARLOFF. Despite the broadness of the character, Karloff finds room for subtlety and small gestures; although he opposed it, he benefits enormously from the decision to allow the Monster to speak. In "Frankenstein," he only bleats piteously, but in "Bride" he stumbles into the forest hut of a blind violinist, who teaches him words ("Wine ... wine!") that later evolve into his poignant statement to Praetorious: "I want friend like me."

The 1931 film was famous for a scene in which the Monster happens upon a little girl who is floating daisies upon a pond. The Monster joins her in throwing flowers into the water; when the flowers are gone he takes the next logical step and throws her in. She drowns. The sequel begins with the girl's parents searching the ruins of the burned mill, to be sure the Monster is dead; the father dies, and the mother clutches a hand in the wreckage, discovering it is not her husband's but the Monster's. Such cold-blooded scenes are in a way more shocking than the forthright violence in the films, but it is interesting how Whale allows his sympathy for the Monster to soften the second story. (This time the Monster saves a drowning girl, although his heroism is misinterpreted as an attack.)

The famous scene in which the Monster dines with the hermit (O.P. Heggie) is quiet and touching (the hermit thanks God for sending him a visitor to break his loneliness). That first meal is poignant, the second one farcical, as the Monster stumbles into a crypt where Praetorious has interrupted his search for spare parts to sit down to a candlelit dinner. Praetorious invites him to join in, and the Monster puffs contentedly on a cigar.

"Bride" belongs largely to Praetorious and the Monster, despite the subplot involving Frankenstein (Colin Clive) and his fiancee (whose wedding date is postponed by the doctor's distractions in the laboratory). The climax comes in Praetorious' gothic tower, with the bizarre apparatus that uses lightning to animate the cobbled-together body parts of the Bride. The scene makes such an unforgettable impression that it's easy to forget how little of the movie the Bride actually appears in.

Whale and his screenwriter, William Hurlbut, add wry humor wherever it will fit. They have fun with the character of Minnie (Una O'Connor), Frankenstein's housekeeper, whose scream could break glass. And they enjoy moments like the one where the Monster saves the shepherdess who has fallen into the water, and muses, "Yes, a woman. Now that's real interesting."

One advantage of horror movies is that they permit extremes and flavors of behavior that would be out of tone in realistic material. From the silent vampire in "Nosferatu" (1922) to the cheerful excesses of Christopher Lee and Peter Cushing in Hammer horror films of the 1960s, the genre has encouraged actors to crank it up with bizarre mannerisms and elaborate posturings. The characters often use speech patterns so arch that parody is impossible.

The genre also encourages visual experimentation. From "The Cabinet of Dr. Caligari" (1919) onward, horror has been a cue for unexpected camera angles, hallucinatory architecture and frankly artificial sets. As mainstream movies have grown steadily more unimaginative and realistic in their visuals, horror has provided a lifeline back to the greater design freedom of the silent era. To see sensational "real" things is not the same as seeing the bizarre, the grotesque, the distorted and the fanciful. There is more sheer shock in a clawed hand unexpectedly emerging from the shadows than in all the effects of "Armageddon," because "Armageddon" looks realistic and horror taunts us that reality is an illusion.

Many biographical details about James Whale (1889-1957) can be glimpsed in "Gods and Monsters," which mentions his early romance with a friend killed in battle, and his great Hollywood movies of the 1930s (not only "Frankenstein," but such titles as "The Old Dark House" and "The Invisible Man"). Whale stopped making films in 1941 and lived quietly and luxuriously, painting and socializing. In the film he is seen at the end of his life, portrayed by Ian McKellen as a civilized, still hopeful gay man who in his new gardener (Brendan Fraser) sees a last opportunity for seduction. Giving Fraser a flat-top haircut, however, is perhaps insisting too much on the parallel between directors as Gods, and the Monsters they create. 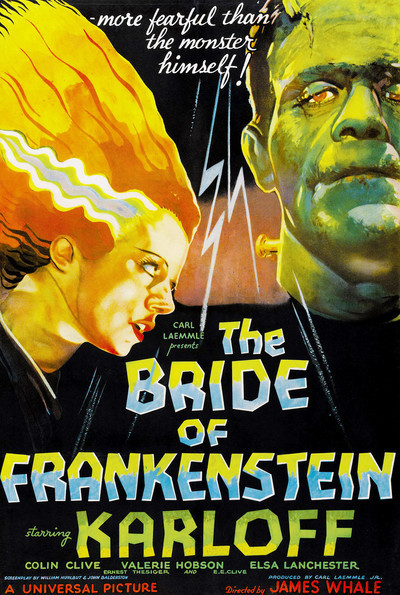 Boris Karloff as The Monster

Lucien Prival as Albert the Butler