Next vacation, how about a nice hotel?

For some 30 years now, small clusters of movie teenagers have made the journey to various cabins in various woods. The return ratio for such trips is one surviving, bloodied, traumatized, hospitalized teenager for every 10 dead friends left behind. And the ratio of entertaining, original movies about attractive young people and the hideous monsters that stalk them is about the same. For every clever remake or freshly twisted spin, there are innumerable gore fests with nothing original to say.

This isn't a strict remake of Sam Raimi's hugely influential 1981 horror classic, but it does include the basic framework and some visual nods to the original. On its own, it's an irredeemable, sadistic torture chamber reveling in the bloody, cringe-inducing deaths of some of the stupidest people ever to spend a rainy night in a remote cabin in the woods.

Shiloh Fernandez is the dull and dimwitted David, who returns to the family's old cabin along with his new girlfriend, Natalie (Elizabeth Blackmore); his former childhood friends Eric (Lou Taylor Pucci) and Olivia (Jessica Lucas), and his little sister, Mia (Jane Levy). Even before we learn Mia's trying to kick smack, we know this kid has problems because she's got a bit of a goth look going, she believes in the spirit world, and she likes to sketch.

Like most cabins in the woods, this cabin in the woods seems to be miles away from any other cabins or any signs of life. Gee, the family must have had a blast there, especially with Mom battling insanity, and Dad — well, we never hear about Dad.

Within a few hours, the dog finds a blood-covered trap door leading to a basement filled with strung-up cat carcasses and a book of evil curses. Soon after that, Mia starts having visions and speaking in a demonic voice. Yet these morons stay put. (When they finally do try to leave, there's a conveniently biblical-style rainstorm flooding the exit road.)

Olivia's a registered nurse, but she doesn't seem smart enough to know how to register for Google Plus. Eric, who for some reason is groomed and dressed as if he'd just come back from a Kurt Cobain look-alike contest, opens a book that says "leave this book alone" and starts reciting a chant that should never be recited. Geez, whose idea was it to invite Eric on this trip?

Enter the she-bitch from hell, who's possessing Mia and intent on offing everyone in sight in the most disgusting, prolonged manner possible. Cue the ominous score, the cheap scares and the increasingly moronic behavior by David and his dunderheaded friends. The gore factor goes all the way to 11, with admittedly impressive makeup and special effects. Over the course of a rainy night that seems like it'll never end, we're treated to multiple scenes of projectile vomiting, dozens of nail-gun shots penetrating flesh and bone, black ooze and blood everywhere, dismemberment and stabbings. All shown in excruciating detail.

Save for a few darkly funny one-liners, there's almost no wicked humor here, and there's certainly nothing original about the plot. The actors do a pretty fair job of conveying terror, but the characters they're playing are such one-dimensional idiots, you begin rooting for the demonic she-bitch from hell to take 'em out.

I love horror films that truly shock, scare and provoke. But after 30 years of this stuff, I'm bored to death and sick to death of movies that seem to have one goal: How can we gross out the audience by torturing nearly every major character in the movie? 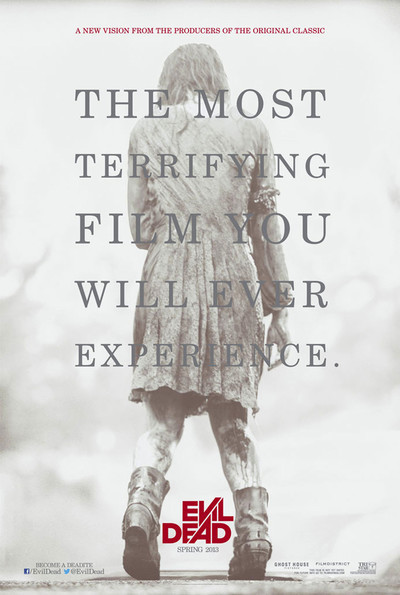 Rated R for strong bloody violence and gore, some sexual content and language