A dying man trudges across a dying planet in George Clooney’s ambitious sci-fi epic for Netflix, “The Midnight Sky.” Based on the book by Lily Brooks-Dalton, this is a piece that almost feels designed by a screenwriting algorithm informed by some of the top genre films of the last couple decades. The recipe here is a base of “Gravity” (which Clooney himself has referenced as an influence, along with “The Revenant”), a bit of “The Road,” a dash of “Interstellar,” a shot of “Ad Astra,” a scoop of “The Martian,” and a pinch of “Children of Men” for flavor. Just being able to pick apart these references doesn’t inherently make “The Midnight Sky” a misfire, but what’s startling is how little is left to chew on after considering the better films brought back to memory by these superficial callbacks. He’s a welcome presence in his first on-screen performance since 2016, but Clooney’s direction is as a cold as the landscape his character travels, never once finding anything that feels organic or character-driven. It looks good. It sounds great. It’s as hollow as can be.

Clooney plays the incredibly named Augustine Lofthouse, a scientist at the end of the world. He decides to stay behind after his station evacuates because of a planetary crisis. Not too many details are given, but Brooks-Dalton, writer Mark L. Smith, and Clooney are clearly suggesting our planet doesn’t have much time left, setting a film about climate catastrophe in 2049. (Remember when apocalyptic movies were further in the future? It’s getting scary. Also is that a “Blade Runner 2049” reference? Probably not but given the familiarity of the rest of the movie anything is possible.) Augustine discovers that there’s a space shuttle named Aether on its way to a home that isn’t habitable anymore, and so he makes it his mission to warn them to turn around and go back to the planet they were already scouting to take the future of the human race. The problem is that his signal isn’t strong enough to communicate with the Aether before it’s too late, and so he has to traverse the Arctic to get to a stronger one. And he has to do so accompanied by a mute girl named Iris (Caoilinn Springall), who happened to be left behind during the evacuation.

“The Midnight Sky” cuts between Iris and Augustine’s harrowing journey and the return voyage of the shuttle, led by a pregnant Sully Rembshire (Felicity Jones). Her partner Tom (David Oyelowo) is the Commander of the ship, which also includes Maya (Tiffany Boone), Sanchez (Demian Bichir), and Mitchell (Kyle Chandler). For most of the film, Sully and her crew have no idea what’s happening back on Earth, so as they navigate the dangers of space in an effort to return to a home that has been destroyed. While this makes for an inherently interesting premise—reversing the traditional space narratives of films like “Apollo 13” or “Gravity” while crafting what’s basically an ‘anti-rescue’ mission on the ground—Clooney never finds the stakes for the space half of his movie. The scenes set in space are expertly designed, and shot well by Martin Ruhe, but they feel entirely devoid of human emotion (until the final act manipulatively calls for it). There’s something so sterile and antiseptic about the space half of this film that it can’t maintain viewer interest or sympathy beyond a filmmaking exercise. It has no oxygen and no heartbeat.

The stuff in the Arctic is more effective and admittedly technically impressive, although the plot begins to make less and less sense—a scene in which Augustine crashes through ice and would almost certainly die from the hypothermia or shock breaks any sense of realism that had been tenuously achieved. Worst of all, Clooney can’t stick with a thread long enough to build tension or drama. We don’t feel Augustine’s commitment or drive because we’re constantly jumping to the tedious characters on the Aether or, much worse, to flashbacks that serve no emotional or character purpose until a final-act twist is revealed. Clooney the director seems to almost be fighting back against potential viewer investment, which makes the final act’s melodrama and twists feel all the more manipulative.

There are hints of the movie that could have been. Clooney develops a quick and effective chemistry with Springall. Sure, she’s mostly a device to give his character something greater to fight for, but they have a silent relationship that works. (Although the film doesn’t have nearly enough quiet moments, thanks in part to an aggressive score by Alexandre Desplat.) Some of the space action stuff works, including a big “Gravity”-inspired space repair sequence that probably will be more effective in theaters than for people who watch Netflix on their phone.

Most of the time, “The Midnight Sky” drifts like space debris between its three settings—shuttle, Arctic, flashbacks—instead of feeling like it's building momentum. It’s like Clooney the director was so concerned about adequately conveying the details of each part of his story that he never broke down the meaning of them or the characters involved. All of the other films mentioned in this review that clearly inspired this one never lost their characters. The heart of this movie just isn’t there. It’s as weightless as space.

In theaters Friday, and available on Netflix on December 23. 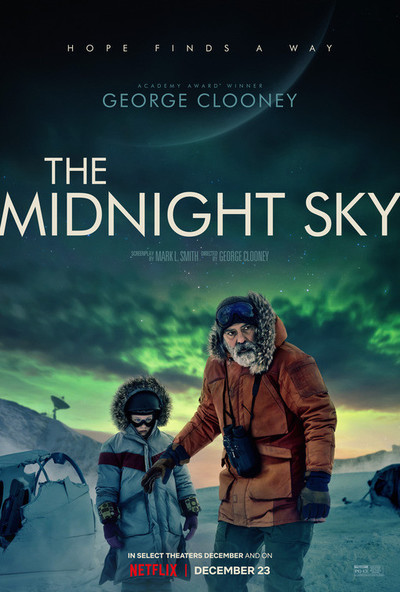