In the first story told on the third day of Boccaccio's "The Decameron," a young guy named Massetto pretends to be a deaf-mute laborer so that he can work at a nearby convent, a convent filled with—as rumor has it—horny nuns. Before he can even settle in, he is besieged by voracious nuns, each of whom he services, one after the other after the other, until finally the envious abbess herself comes a-callin'. This story is the basis for Jeff Baena’s "The Little Hours," a riotous medieval-era sex romp played with lunatic conviction by a great cast. Everyone wears period garb, the settings are period accurate, and yet the behavior and the language is to-the-minute contemporary.

The opening sequence is like "Mean Girls," the Dark Ages years, with three bitchy nuns—Alessandra (Alison Brie), Genevra (Kate Micucci), and Fernanda (Aubrey Plaza, who also produced the film)—eye-rolling over laundry duties, snarking at one another, screaming "You fucking pervert!" at a leering handyman. Sister Marea (Molly Shannon) and Father Tommasso (John C. Reilly) run the convent—barely—and into this hothouse cloister comes Massetto (Dave Franco), a young guy on the run. Massetto fled his former situation because he was sleeping with the mistress of the house (a brilliantly deadpan Lauren Weedman), and the affair was discovered by her warrior husband (Nick Offerman), a violent man who rants so obsessively about "the Guelphs" that even the chainmail-wearing guards (one of whom is played by Adam Pally, a funny sight in and of itself) roll their eyes. After Massetto and Father Tommasso meet by chance in the forest, Tommasso—always slightly intoxicated—offers Massetto safe harbor at the convent, but only if Massetto pretends he is a deaf mute.

Massetto does his best to keep up with his new gardening tasks, but it's not easy when nun after nun barges into his personal space. Introducing a man into a mostly-female environment throws everything out of whack (shades of "The Beguiled"). Franco is perfect for this material. He's handsome but with a goofball soul. The grin that freezes on his face when some nun grinds into his pelvis shows both terror and arousal, simultaneously. The actors are a vaudeville troupe of broad types, played to the hilt. Reilly's face, as he hears Massetto's X-rated confession one night, is a perfect example of how listening is equally as important in acting as talking. Franco is hilarious in that confession scene, but the way Reilly listens is what brings the joke home. Brie—a truly gifted actress—plays a ladylike young woman, until the habit comes off and she discovers what she had been missing out on all these years. Plaza and Micucci's characters are like middle-school tweens, Plaza the ruthless Queen Bee and Micucci the groveling sycophant. Micucci, who was so funny and sweet in "Don't Think Twice," has an extended scene late in the game where she reaches almost a Madeline Kahn level of physical and emotional comedy. Humphrey Bogart said that good acting was "six feet back" in the eyes. That applies here, too. On the page, that scene might not have seemed all that funny. In Micucci's hands, it is riotous to the point of lunacy.

What could have been—in less confident hands—a one-joke sketch becomes, instead, a consistently wacko screwball. Baena knows (like Boccaccio knew) that the main thing—Nuns Gone Wild—is funny. The three extremely funny actresses go to town with all of the possibilities. But Baena also gets that smaller moments of humor act as glue to keep the whole thing together. He is sensitive to the comedic possibilities in a glance, a pause, a visual. Perhaps most strikingly, Baena has a fine-tuned sense of the absurd. There's a bit with a turtle walking slowly by a doorway that is such a quiet little moment, really, but it has an enormous comedic impact.

Everyone in "The Little Hours" is dealing with enormous and urgent needs. No one is having enough sex. And even when a character has some sex, it's still not nearly enough. Who on earth would ever say, "Okay, I've had enough sex for one lifetime, thanks, I'm done"? The fact that all of this takes place in a convent just drives the point home further. The literary device of "The Decameron" was that all of the tales—filled with jokes and love and sex—were told by a group of people hiding out in the countryside from the Black Death (Boccaccio had lived through two epidemics himself). The plague doesn't play a part in "The Little Hours" but the feeling behind the original tales—their rambunctious earthy humor—is alive and well in Baena's film, as is the feeling that the sex-drive—the cause of so much distress in the world—is not just evidence of life, it IS life. The plague has passed you by. This time, at least. Live it up. 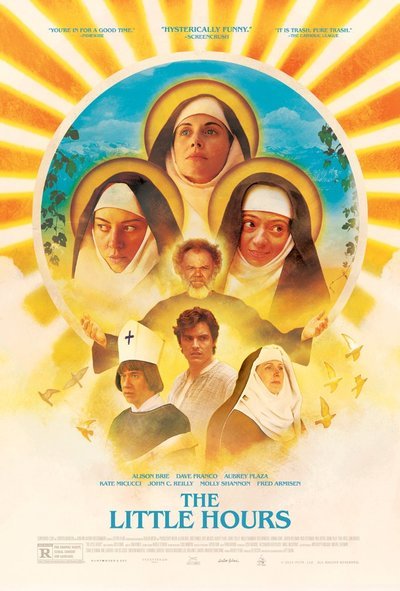