The Life of David Gale

"The Life of David Gale" tells the story of a famous opponent of capital punishment who, in what he must find an absurdly ironic development, finds himself on Death Row in Texas, charged with the murder of a woman who was also opposed to capital punishment. This is a plot, if ever there was one, to illustrate King Lear's complaint, "As flies to wanton boys, are we to the gods; They kill us for their sport." I am aware this is the second time in two weeks I have been compelled to quote Lear, but there are times when Eminem simply will not do.

David Gale is an understandably bitter man, played by Kevin Spacey, who protests his innocence to a reporter named Bitsey Bloom (Kate Winslet), whom he has summoned to Texas for that purpose. He claims to have been framed by right-wing supporters of capital punishment because his death would provide such poetic irony in support of the noose, the gas or the chair. Far from killing Constance Harraway (Laura Linney), he says, he had every reason not to, and he explains that to Bitsey in flashbacks that make up about half of the story.

Bitsey becomes convinced of David's innocence. She is joined in her investigation by the eager and sexy intern Zack (Gabriel Mann), and they become aware that they are being followed everywhere in a pickup truck by a gaunt-faced fellow in a cowboy hat, who is either a right-wing death-penalty supporter who really killed the dead woman, or somebody else. If he is somebody else, then he is obviously following them around with the MacGuffin, in this case a videotape suggesting disturbing aspects of the death of Constance.

The man in the cowboy hat illustrates my recently renamed Principle of the Unassigned Character, formerly known less elegantly as the Law of Economy of Character Development. This principle teaches us that the prominent character who seems to be extraneous to the action will probably hold the key to it. The cowboy lives in one of those tumble-down shacks filled with flies and peanut butter, with old calendars on the walls. The yard has more bedsprings than the house has beds.

The acting in "The Life of David Gale" is splendidly done but serves a meretricious cause. The direction is by the British director Alan Parker, who at one point had never made a movie I wholly disapproved of. Now has he ever. The secrets of the plot must remain unrevealed by me, so that you can be offended by them yourself, but let it be said this movie is about as corrupt, intellectually bankrupt and morally dishonest as it could possibly be without David Gale actually hiring himself out as a joker at the court of Saddam Hussein.

I am sure the filmmakers believe their film is against the death penalty. I believe it supports it and hopes to discredit the opponents of the penalty as unprincipled fraudsters. What I do not understand is the final revelation on the videotape. Surely David Gale knows that Bitsey Bloom cannot keep it private without violating the ethics of journalism and sacrificing the biggest story of her career. So it serves no functional purpose except to give a cheap thrill to the audience slackjaws. It is shameful.

One of the things that annoys me is that the story is set in Texas and not just in any old state--a state like Arkansas, for example, where the 1996 documentary "Paradise Lost: The Child Murders at Robin Hood Hills" convincingly explains why three innocent kids are in prison because they wore black and listened to heavy metal, while the likely killer keeps pushing himself onscreen and wildly signaling his guilt. Nor is it set in our own state of Illinois, where Death Row was run so shabbily that former Gov. George Ryan finally threw up his hands and declared the whole system rotten.

No, the movie is set in Texas, which in a good year all by itself carries out half the executions in America. Death Row in Texas is like the Roach Motel: Roach checks in, doesn't check out. When George W. Bush was Texas governor, he claimed to carefully consider each and every execution, although a study of his office calendar shows he budgeted 15 minutes per condemned man (we cannot guess how many of these minutes were devoted to pouring himself a cup of coffee before settling down to the job). Still, when you're killing someone every other week and there's an average of 400 more waiting their turn, you have to move right along.

Spacey and Parker are honorable men. Why did they go to Texas and make this silly movie? The last shot made me want to throw something at the screen--maybe Spacey and Parker.

You can make movies that support capital punishment ("The Executioner's Song") or oppose it ("Dead Man Walking") or are conflicted ("In Cold Blood"). But while Texas continues to warehouse condemned men with a system involving lawyers who are drunk, asleep or absent; confessions that are beaten out of the helpless, and juries that overwhelmingly prefer to execute black defendants instead of white ones, you can't make this movie. Not in Texas. 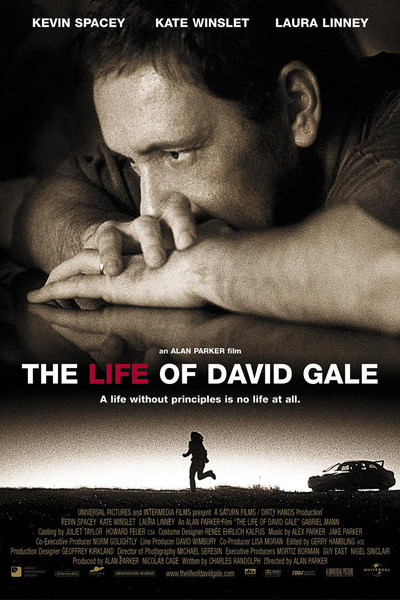