“The Hundred-Foot Journey” is a film that demands that you take it seriously. With its feel-good themes of multicultural understanding, it is about Something Important. It even comes with the stamp of approval from titanic tastemakers Oprah Winfrey and Steven Spielberg, who both serve as producers. What more convincing could you possibly need?

There’s something familiar about the treacly and sanctimonious way this film is being packaged. It reeks of late-‘90s/early ‘00s Miramax fare: films with tasteful yet ubiquitous ad campaigns and unabashed Oscar aspirations which suggested that seeing them (and, more importantly, voting for them) would make you a better person. Films like “The Cider House Rules,” “Chocolat” and “The Shipping News.” Films by Swedish director Lasse Hallstrom.

Hallstrom just happens to be the director here, as well, and the similarities to “Chocolat” are inescapable. Stop me if think you’ve heard this one before: A family moves into a quaint but closed-minded French village and shakes things up with an enticing array of culinary delicacies. This new enterprise happens to sit across the street from a conservative and revered building that’s a town treasure. But the food in question isn’t a bon bon this time—rather, the movie is the bon bon itself.

But despite being handsomely crafted, well acted and even sufficiently enjoyable, “The Hundred-Foot Journey” is also conventional and predictable. And for a film that’s all about opening up your senses and sampling spicy, exotic tastes, this comic drama is entirely too safe and even a little bland.

What livens things up, though, is the interplay between Helen Mirren and Om Puri as battling restaurant owners operating across the street from each other—100 feet away from each other, to be exact, a short but fraught trip that various characters take for various reasons. Watching these veteran actors stoop to sabotage each other provides a consistent source of laughs. She’s all sharp angles, piercing looks and biting quips; he’s all round joviality, boisterous blasts and warmhearted optimism. The contrast between the British Oscar-winner and the Indian acting legend offers the only tension in this otherwise soft and gooey dish—that is, until the film goes all soft and gooey, too.

Mirren stars as Madame Mallory, owner of Le Saule Pleurer (The Weeping Willow), an elegant and expensive French restaurant that’s the winner of a prestigious Michelin star. But one star isn’t enough for the coldly driven Mme. Mallory—she wants another, and then another.

But her bloodless quest for gourmet grandeur is interrupted by the arrival across the street of an Indian family: the Kadams, who’ve been wandering around Europe ever since their beloved restaurant back home burned down during political rioting. When the brakes on their car malfunction on a treacherous stretch of spectacular countryside, Papa (Puri) insists it’s a sign from his late wife and decides to open a new eatery in the charming town at the bottom of the hill.

Never mind that one of the most celebrated restaurants in all of France is sitting right across the street from the empty building he rents. Never mind that they are in an insular part of the country where the residents probably don’t even know what Indian cuisine is, much less like it, as his children point out. He has faith in his food—and in his son, Hassan (Manish Dayal), a brilliant, young chef.

Just as Papa and Mme. Mallory strike up a sparky rivalry, Hassan enjoys a flirtatious relationship with French sous chef Marguerite (Charlotte Le Bon, who played an early model and muse in the recent “Yves Saint Laurent” biopic). The script from Steven Wright (who also wrote the far trickier “Locke” from earlier this year, as well as “Dirty Pretty Things” and “Eastern Promises”) is full of such tidy parallels, as well as trite and overly simplistic proclamations about how food inspires memories. Dayal and Le Bon do look lovely together, though, and share a light, enjoyable chemistry.

Then again, it all looks lovely—both the French and Indian dishes as well as the lush, rolling surroundings, which we see through all four seasons; the work of cinematographer Linus Sandgren, who recently shot “American Hustle.” This sweetly pleasing combination of ingredients would have been perfectly suitable if the film didn’t take a wild and needless detour in the third act. That’s when it becomes an even less interesting movie than it already was, in spite of its loftier aspirations. 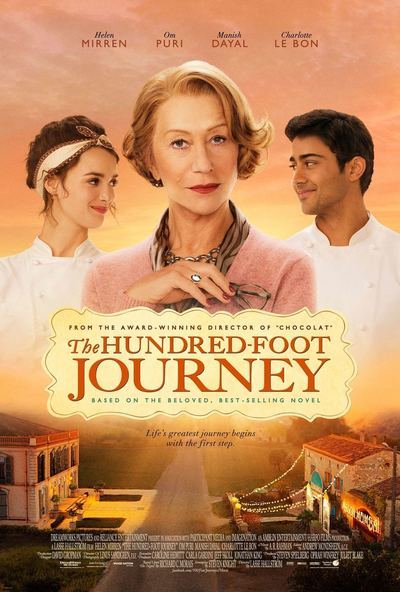