A description of the location and action (or inaction) of "Locke," a new movie written and directed by Steven Knight, can make the movie sound like something of a stunt. Actually, let’s just say that "Locke" is a stunt, inasmuch any work of art made under an entirely deliberate and arguably unnecessary restraint is. See, for instance, Georges Perec’s novel "La Disparation," written without use of the letter "e." (Perec’s work is part of a larger strain of literature represented by a French faction called OuLiPo, of which he was a member). "Stunt" need not be a pejorative, and when a work of art made under constraint uses said constraint to advance its theme in a way that conventional means could not, then the stunt becomes a transcendent one.

Before I lose you all with this high-flown contemplation of aesthetics, I’ll tell you the stunt of "Locke:" with the exception of its opening shot, which shows its title character getting into his tricked-out BMW, the movie is a one-man show that takes place as the title character is taking a long, fateful drive. The camera doesn’t always stay in the car, but it’s with Locke for the whole drive. We hear the voices of others, but we don’t see anyone else. The self-imposed minimalism of the conceit challenges Knight to make a compelling cinematic work. And it challenges the actor playing the title character more.

Fortunately, that actor is Tom Hardy, and boy does he do a job with his unusual, and unusually complex character. His face a clenched mask of thick brow and bearish beard, his voice a comfortingly gruff burr that can turn fearsomely sardonic at the tilt of a rearview mirror, Hardy uncannily conveys the weightless pressure and the suffocating freedom that can only be felt simultaneously by a man who’s divesting himself of his entire way of life. Because that’s what Locke is doing on his drive. He’s an architectural foreman who’s running out on the biggest job of his life. He’s a family man who’s making a confession of betrayal to his wife, the mother of his two boys. He’s doing all of this with full and appalling consciousness of the wreckage he’s creating as he’s doing it. Because of a decision he’s made to make right on a wrong move he made some months ago. Because of a conviction he’s arrived at to do something genuinely selfless.

How right is Locke in making the decision to drop everything he’s got to attend to the birth of a child he had never consciously intended to father? That’s up to the viewer to decide. Certainly audience members overly concerned with conventional plausibility will roll their eyes at certain circumstances of the scenario, but I wonder if they’ll repent when it’s revealed that Knight the writer has been ahead of them the whole time, and has answers to their concerns that are both nicely constructive and morally provocative.

The film’s formal box is one that felt, to me at least, potentially Pinteresque, and Knight comes up with pauses and quasi-aphoristic bits of dialogue—"You sound different."/"I am the same." goes one representative exchange, and, later, one character rages "The difference between never and once is the difference between right and wrong"—that recall/honor the late maestro while conveying their own uncomfortable truths. And while Hardy is alone on screen, he’s not alone in terms of acting strength: the people he’s talking through his life with are portrayed by the formidable likes of Olivia Colman ("Tyrannosaur," "Broadchurch"), Ruth Wilson ("Anna Karenina") and Ben Daniels ("House of Cards"), among others.

The movie isn’t perfect; Knight, who wrote "Dirty Pretty Things" and "Eastern Promises" and is here making his second feature as a director, sometimes gets a little carried away trying to maintain what he takes for visual interest. Not-too-functional shots of reflections of traffic lights in windshields and such play as a little labored, because they are. That’s not much to forgive, though, and in the end, "Locke" is a cinematic stunt that engrosses as it unspools, and pays dividends after it’s been accomplished. 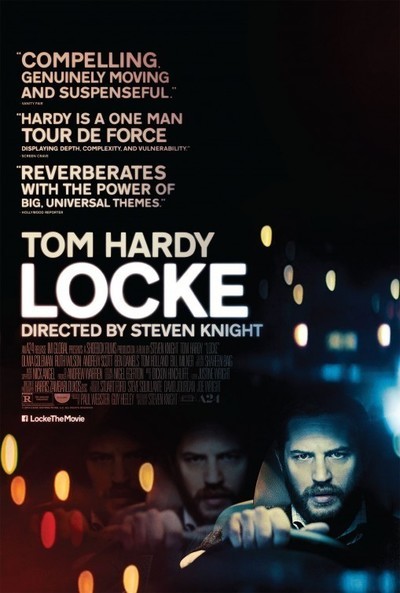