It was a simpler time in 2013, when “The Purge” was released. A time, you could say, wherein the inherent atavism of United States society was in a sufficiently inchoate stage that one could satisfyingly treat it by way of a genre movie allegory. Or, as I put it in my review of that movie for another outlet, a time when one could treat its premise and execution as “a nasty little high-concept horror movie that is not only gratifyingly and consistently nerve-jangling but also doesn’t shrink from the mordant social consciousness that drives its narrative motor.”

The effectiveness of the movie was such that it spawned several sequels, and I have to be upfront and say I have not seen 2014’s “The Purge: Anarchy” or 2016’s “The Purge: Election Year.” I can infer that these pictures, all written and directed by James DeMonaco, went for more direct social commentary than the 2013 film. “The First Purge,” written by DeMonaco and directed by Gerard McMurray, attempts to depict a society that was compelled to accept the night-in-which-all-crime-is-legal government scheme that was the aforementioned narrative motor of the original movie.

The movie opens with an extreme close-up of a person of color, his thin face scarified and his teeth orange-yellow, answering “Everyone. Everything.” to the question “Who are you angry at?” This character will later be given the nickname “Skeletor.” He’s one of many residents of a Staten Island neighborhood that has been chosen by the “New Founding Fathers” party President of the U.S. for a social science experiment. Poor folks are being offered five grand to stay on the island during the 12-hour period of free crime, and more money if they participate, while wearing sci-fi contact lenses to record their depredations.

The scheme has been plotted by social scientist Dr. Updale, played by Marisa Tomei in a fashion that suggests she did not get much sleep during the shoot, and put into action by Arlo Sabian, one of the many doughy white guys who seem to dominate the party in power. Native Staten Islanders opposed to the lab rat situation include local activist Nya (Lex Scott Davis) and local drug kingpin Dmitri (Y’lan Noel). Nya says it’s bad for the poverty-impoverished community, and Dmitri says it’s bad for his business. They’re both right! Conveniently enough, they are ex-lovers, and Nya’s little brother Isaiah (Joivan Wade), frustrated by circumstances, has been flirting with becoming one of Dmitri’s dealers. He is almost put out of commission by the aforementioned Skeletor, who really is a crazy SOB, before the Purge even begins.

It’s not necessarily a big deal that maybe a dozen characters are meant to stand in for the entirety of a New York City borough. What is frustrating is that the social commentary portions of the movie are simplistic even by the low standards generally set by genre films. Dmitri and his crew are putting themselves on lockdown, and he offers shelter to Nya, who responds by telling him that while this Purge may exert a destructive force, “you destroy this community 364 days a year.” It’s pretty much a given that Dmitri will have this on his mind for a while, particularly after he figures out that this Purge is rigged. That is, that the white supremacist “New Founding Fathers” have brought mercenaries into the scene to create mayhem if the general populace doesn’t kick in with enough.

Given the potential diceyness of the racially charged premises here, I suppose it speaks well of DeMonaco and his group of producers, which includes Michael Bay, got a person of color to direct the proceedings. I do wish that said director was a better one. McMurray has a good effects crew to get the blood spurting and the flamethrowers raging; his tendency to linger over stabbing deaths and their attendant noises doesn’t suggest a devotion to realism so much as a compulsion to test any given viewer’s gag reflex. He also includes footage that another director would have thrown away. There’s a scene in which Patch Darragh’s Sabian character tries to buck up Dr. Updale, telling her that what they’re doing is “for our country,” and shaking her by the shoulder. Poor Marisa Tomei doesn’t react so much as stand there gaping, perhaps trying to remember her line. Clearly a retake would have been in order here. Later in the film, Tomei’s character actually does get to say what the actress perhaps had been thinking all along: “What have I done?”

Once the mercenaries start tooling around wearing actual Ku Klux Klan outfits, the pretenses to allegory have gone out the window. And yes, it is salutary to see guys with pointy hoods getting blown away by righteous African-American avengers. But the cinematic cost of getting there was not, for this viewer, worth it. 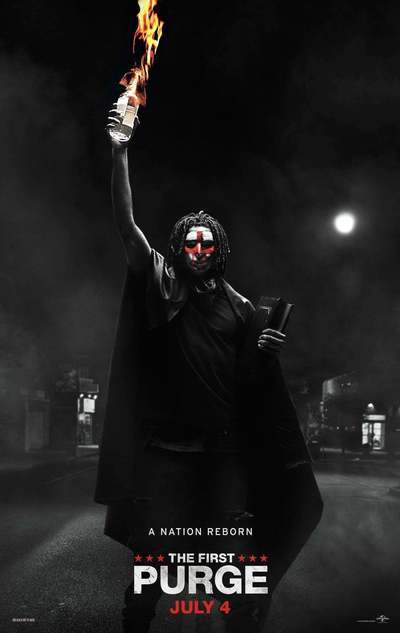 Rated R for strong disturbing violence throughout, pervasive language, some sexuality and drug use.