At one point in "The Purge," a horror film in which Americans are legally allowed to commit crime one night per year, a character laments that "things will never be the same ever again." The line is cringe-worthy given that the character just watched people she loves hurt somebody without hesitation, yet you don't know anyone in the film well enough to care one way or another, and the camera jiggled so much during the violence that you only got teasing, migraine-inducing impressions of the act.

Writer/director James DeMonaco, who previously scripted the surprisingly effective 2005 remake of John Carpenter's "Assault on Precinct 13," cuts creative corners this way throughout "The Purge." He often confuses economical story-telling with paint-by-numbers dialogue and vague characterizations. So instead of being a creepy B-movie about the necessity of suppressing one's animalistic urges, "The Purge" is just an uninspired film.

The concept of Purge Night is novel enough: crime is not in fact cathartic, so while behaving badly once a year may keep the the nation's crime rate down, it also turns people into monsters. But the movie forgets to explore its own premise, and instead focuses on a "Straw Dogs"-like scenario in which a home-owner resists a mob that wants to break into his house in pursuit of a fugitive they want to lynch.

The year is 2022. It may not be dystopia yet, but it's getting there. Somewhere in the suburbs, James Sandin (Ethan Hawke), a top salesman at a security company, has made a lot of money by selling home protection systems that consist of elaborate surveillance systems and steel doors that seal doors and windows. James just wants to hunker down and avoid Purge Night in his home, which, once his own security system activates, transforms into a house-shaped bank vault.

James's wares are put to the test when his sulking loner son Charlie (Max Burkholder) admits a never-identified stranger (Edwin Hodge) into the Sandins' home. Charlie's humanitarian motives don't require much explanation: the stranger is wounded and helpless. But the stranger is also being chased by a posse of machete-wielding yuppies. These killer rich kids are supposed to be as odd-looking as they are menacing, so their leader (Rhys Wakefield) proudly wears a blazer with a fraternity crest, and a mask with a leering grin and long blonde hair that makes him look faintly Crispin Glover-esque. He could be the nerd-hating, Aryan younger brother of Michael Meyers from "Halloween."

Wakefield's character, only identified as "Polite Stranger" in the film's credits, gives James a choice: sacrifice the bleeding stranger and save his family, or perish for a noble lost cause. This scenario is promising enough, though DeMonaco hypocritically encourages viewers to applaud the spectacular deaths of some home invaders before eventually concluding that the best thing for people to be is repressed and non-violent. But James's dilemma is never as nerve-wracking as it should be, because it's never clear what he's fighting for or against.

For one thing, the stranger is barely in the film: he's apparently missing most of the time, and is therefore more of an abstract concept than an identifiable person. And the Polite Stranger is a cartoon fascist with all the nuance of an Adam West-era Batman villain. (What to name him? Killer Preppy? The Jackbooted Collegiate?) After repeatedly calling the wounded stranger a "homeless filthy swine," the Polite Stranger warns James, "Either give us he, or that will be thee!" but only after he tentatively bids James farewell with a florid, "Toodle-oo." Unfortunately, Wakefield's hamminess isn't a patch on Burgess Meredith's Penguin or Frank Gorshin's Riddler, and the film's jittery hand-held photography obscures our view of pretty much everything. It's hard to be shocked when the camera operators' convulsions are more violent than whatever they're shooting.

DeMonaco almost never slows down long enough to give us a singular image of James or his world. A moment in which James peeps out of his front door's steel barricade and stares blankly — but directly! — at the viewer is effectively unnerving. But James is usually not so vulnerable, and the bland circumstances of his macho crisis are only fitfully memorable. Like the previously mentioned character who unbelievably insists nothing can ever be the same after The Purge, James speaks fluent Clichénese. When he finally makes up his mind and tells Mary whether he intends to fight back, his decision is expressed so generically — "This our house!" — that it's unclear what he really cares about, his family's respect or his homeowner's insurance premium. Violence may not be cleansing, but you might want to stifle unhealthy thoughts after watching "The Purge." 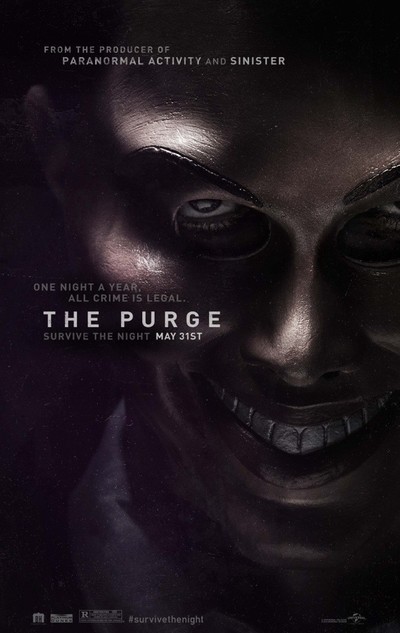