While "The Purge: Anarchy" is more thoughtful and involving than "The Purge," a misconceived B-thriller set in a dystopian near-future, it's not much better. While "The Purge" focused on a middle-to-upper class family's struggle to survive Purge Night, an annual government-sanctioned night of lawless debauchery, "The Purge: Anarchy" is about everyone else affected by this Bizarro, post-Roger Corman world. So, this time, characters acknowledge that The Purge encourages a free-for-all that disproprtionately affects profit-hungry blue collar sadists and closeted middle-class sociopaths more than cartoonishly callous socialites. But, just like its predecessor, "The Purge: Anarchy" is so weak on a basic storytelling level that it makes you want to nitpick everything about it, from characters' generically illogical decisions (ex: Why are you running towards mounted guns?) to its cheap-looking, jiggly hand-held cinematography. Somehow, the fact that writer/director James DeMonaco is more ambitious with his sequel makes it that much more disappointing.

"The Purge: Anarchy" follows a group of hapless stragglers as they look for safe haven on Purge Night. The only thing members of this group have in common: they do not want to die. Shane (Zach Gilford) and girlfriend Liz (Kiele Sanchez) are just as victimized as Tanya (Justina Machado) and mother Eva (Carmen Ejogo), though the latter couple was forcibly dragged from their home by would-be revelers. All four victims are united by Sergeant (Frank Grillo), an indecisive, but basically good-natured Purge participant. Their lives before and after The Purge are pretty much immaterial. Each person has a wisp of a backstory, but none of that really matters. Instead, "The Purge: Anarchy" focuses on Sergeant's group as they evade mask-wearing bikers, a Bill Paxton lookalike, and evil rich people. The night is young, and everyone's out for blood.

Everyone but DeMonaco, that is. He gives himself several opportunities to mock his more bloodthirsty characters, including blue-plate fund-raisers and amoral human traffickers. But none of these characters are really to blame. They're dupes, as is apparent by the way that almost all Purgers bless "the New Founding Fathers" for giving them the right to Purge. The only really capital-B Bad Purger is the gun-toting slob that tries to rape Eva and Tanya. You know he's black-hat bad because he roars about "releasing the beast," a phrase that a newscaster also uses when telling Purge people to enjoy themselves. That kind of prompt is indicative of how bland "The Purge: Anarchy" is. Several characters exist only to serve as nasty caricatures, particularly anyone rich enough to own formal-wear. And while you shouldn't expect a "Robocop"-level critique from DeMonaco, the screenwriter of the low-stakes 2005 remake of "Assault on Precinct 13," you should expect him to follow through on some of his more provocative ideas.

Then again, while you can ignore how toothless "The Purge: Anarchy" is as an allegory, you can't escape the film's pervasive dreariness. It's one thing to be grim, and another to be competently grim. DeMonaco's film is the former: characters are consistently poorly lit, action scenes are negligibly choreographed, and actors perform as if they know a second or third take is coming. "The Purge: Anarchy" starts with a seemingly important subplot--Eva's father Rico (John Beasley) is sick, and needs medicine badly--then drops it after that subplot becomes moot. It's the kind of drama where the death of one of the film's five major characters just sort of happens, and there are no real repercussions. DeMonaco's characters appear, gently stir the pot, then vanish. You won't remember them any time soon.

More than anything, this speaks to DeMonaco's creative indecision. If he unclenched, and had a little fun developing the world his film is set in, "The Purge: Anarchy" might not be so tedious. It's as silly as "Logan's Run" and as angry as "The Last House on the Left" but its creator isn't confident enough to follow through on any of its superior ideas. There's a good movie to be made of "The Purge: Anarchy"'s raw materials. Here's hoping it doesn't take two more sequels to get there. 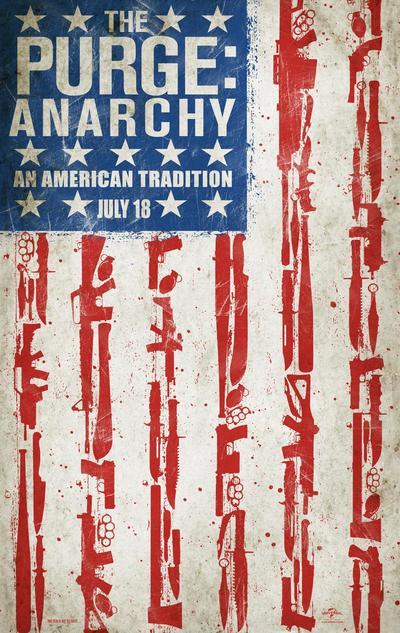 Rated R for strong disturbing violence, and for language