"Election Year" doesn't just encourage viewers to cheer when garden-variety psychopaths are shot up, hit by cars, blown up, or stabbed to death during "Purge Night," a government-sanctioned holiday where citizens are encouraged to "purge and purify" themselves by committing crimes. Writer/director James DeMonaco (the last two "Purge" movies) also goads viewers with moral posturing by pitting working-class characters against hypocritical politicians, European "murder tourists," and other sloganeering baddies who insist that violence is an American pastime. If that's true, then DeMonaco's film is a prime example of the condition it derides, a fetid slice of US exploitation cinema that chides audience members while ineffectively whipping them into a frenzy. This movie is an ugly provocation, one that feels especially crass in light of national tragedies like the recent shooting in Orlando.

Since this is the second sequel to DeMonaco's relatively tolerable "The Purge," "Election Year" does not significantly develop or expand on the original film's premise. The New Founding Fathers of America (NFFA), a cartoonishly evil group of blue-blood politicians who oppress the poor, are still somehow in control, and still using Purge Night to line their own pockets. So it's up to Senator Charlie Roan (Elizabeth Mitchell) to stop Purge Night—provided she survives. The NFFA target Roan for assassination, leaving it up bodyguard Leo Barnes (Frank Grillo), and working-class bystanders Joe (Mykelti Williamson) and Dawn (Liza Colon-Zayas) to keep the senator alive.

The fundamental problem with this scenario is that the violence in "Election Year" is only selectively ugly. On one hand, the movie seems to have been shot with a beer-bottle filter, and the series' usual jiggly hand-held digital photography is used to cover instead of direct action scenes. But the violence in the movie is supposed to be not only cathartic, but downright crowd-pleasing. Roan may talk a good game, yet she never protests too much when Leo and his allies stop bad guys by murdering them. The NFFA—who don't really resemble Donald Trump, despite the film's tagline of "Keep America Great"—are supposed to be bad because they talk out of both sides of their mouths. But while their leaders protest that it is not "hypocritical" to purge because violence is "purifying," we're supposed to enjoy watching Dawn take out whatever generic bad guys that Leo isn't able to. There may be nothing substantially different between Leo's and the NFFA's methods. But any claims to effective satire go out the window when your villains are yelling about the American nature of violence, and the only response they get is a grisly death.

Then again, what would you expect from a film that treats blue collar heroes like Joe and Dawn as token signs of progress? There's so much wrong with this film, from its muddy visual scheme to its Hans Zimmer-lite score (try to listen to the film's klaxon-like music and not think of Zimmer's "Inception" braaahm-intensive score). But the worst part is that it tries to pass as a film about and for those who Jarvis Cocker famously called "common people." Dawn is a personality-less butt-kicking heroine—she gets by with a glare and a gun—but Joe is hatefully stereotypical. He's curiously humanized by his need to protect his bodega, whose Purge Night premiums mysteriously sky-rocket just before the Purge. But much of Joe's dialogue is blatant, sometimes offensive pandering, like when Joe's group is surrounded by gang members, and he laments that they're like a bucket of fried chicken that's about to be attacked by a bunch of "negroes." Joe's use of the word "negro" is supposed to be convivial, not offensive, but he uses it three times for the sake of establishing his everyman bonafides. How are viewers supposed to trust a film that uses Joe's race as a cheap punchline? Joe even saves Leo by revealing that he once was a gang member. And one of Joe's regular customers only cares about two things: "pussy and waffles." Just what we need—another film that views black people through the lens of racist tropes.

To be fair: low-brow humor, race-baiting, and even acts of savage violence can theoretically be used to express political anger in effectively unsettling ways (for proof, see Rob Zombie's "The Devil's Rejects"). But only a truly miserable and, yes, hypocritical film tsk-tsks with one hand what it offers with the other. There's nothing specific, thoughtful or emotionally involving about "Election Night" beyond a basic need to push buttons, and get a rise out of viewers. The good guys are actually bad, and the bad guys are too indistinct to be hateful. Vote with your wallets, and go see something else. 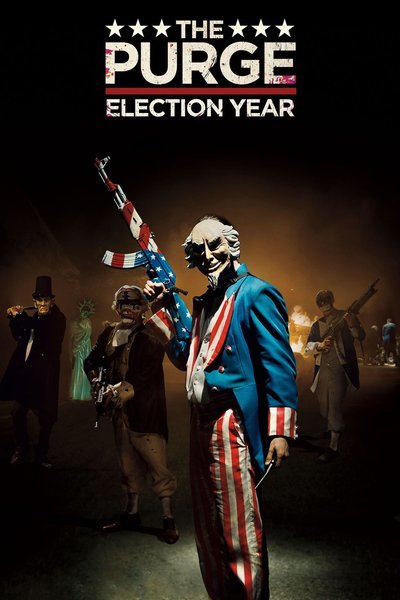