Despite working in feature films for nearly 40 years, Denzel Washington has never until now appeared in a sequel to one of his films. Oh sure, he has done a number of films where one suspects that future installments might have been contemplated at some point but none have ever come to fruition. Now he has finally taken the sequel bait with “The Equalizer 2” and the only thing more baffling than the question of why none of his other movies got follow-ups is the question of why he would bring an end to that streak with something so completely useless.

Yes, the 2014 film, based on the mid-Eighties television show of the same name, was a box-office hit, but it was one of those hits that faded so quickly from the mind after it departed theaters that even those who professed to like it would be hard-pressed to actually remember anything about it. Luckily for them, that shouldn’t be a problem this time around because even the most easily satisfied fans of Washington will be unlikely to find much of anything in this sadistic, stupid and sloppy sequel.

The first film featured Washington as Robert McCall, a seemingly unassuming worker at a big box store who just happened to be an ex-CIA agent with a particular set of skills that he would deploy on anyone who crossed paths with himself or any of his vague acquaintances. At one point, I recall, the store was robbed and one of the thieves took a co-worker's cherished wedding ring. Luckily, thanks to his unique skill set (which I believe consisted of getting the license plate number of the getaway car), he figures out where the thief lives, visits him in the middle of the night with a hammer borrowed from the store stock and beats the guy with it before getting the ring back and returning it. His only true friends were Susan Plummer (Melissa Leo), a former agency colleague who is the only person who knows he is still alive, and her husband Brian (Bill Pullman).

This time around, it seems that, like most people, McCall has been forced out of the retail industry and is now a Lyft driver. Happily, this still allows him to come across unsavory characters and brutally dispatch them as payment for their misdeeds. He even gets the occasional off-the-books freelance assignment from Susan—the opening sequence has him destroying a group of kidnappers on a train bound for Istanbul. For the most part, however, he seems to be in a bit of a lull as his current projects—trying to help an elderly Lyft customer (Orson Bean) recover a painting stolen from his family by the Nazis and mentoring a neighbor kid, Miles (Ashton Sanders) by encouraging him to paint a mural instead of dealing drugs—do not require much stabbing, shooting or neck-breaking. That all changes when Susan goes off to Belgium to look into the mysterious murder-suicide of a high-level agency contact and meets an ugly end. This makes things—Spoiler Alert!—personal, and McCall is soon on the case utilizing his extraordinary intuition and impeccable killing skills to track down Susan’s killers and wipe them out.

If the plot of “The Equalizer 2” sounds dull and perfunctory in the retelling, you cannot imagine how much more of a drag it is to watch it play out before your eyes. The screenplay by Richard Wenk is a joke, a lame collection of bland characters, nonsensical plotting and revenge-movie clichés that occasionally interrupt the carnage for the uninspired subplot involving McCall and the kid that appears to have been shoehorned into the proceedings in order to convince Washington that he was making something that wasn’t just another “Death Wish” clone. Neither Washington nor director Antoine Fuqua—whose previous collaborations have included the original “The Equalizer,” “Training Day” and the remake of “The Magnificent Seven”—seem willing to do much of anything more than simply go through the motions in exchange for their paychecks, it is the furthest thing from personal for them.

The only memorable aspect on hand in “The Equalizer 2” is also its least appetizing attribute—the relentless amount of sadistic violence on display. Yes, I am aware that a film along these lines pretty much requires a heaping helping of brutality throughout, but this one, like its predecessor, is so far beyond the pale that it comes closer to being nauseating than exciting. This is even more off-putting because if I remember the original TV show correctly, the character tended to get the best on criminals by using his intellect and would only switch to violence as a last resort. I can definitely see Washington playing a character like that successfully, but that aspect has been almost entirely dropped in order to squeeze in a few more neck-stabbings and face-spearings. The scene in which Melissa Leo’s character meets her demise is especially ugly, all the more so when you recall that in her previous film with Fuqua, “Olympus Has Fallen” (2013), she went through another extended scene in which she underwent a particularly brutal beating in what I sincerely hope is just a coincidence. Even if it is, Leo might want to consider not picking up the phone the next time he calls her.

“The Equalizer 2” is slickly made and largely appalling garbage but there is a good chance that it will do fairly well at the box office, thanks almost entirely to the enormous amount of goodwill that Washington has generated with moviegoers over the years. It is just too bad to see it squandered on something as nasty as this. There is no doubt, of course, that he can and will do better in the future with projects that make far better use of his talents. Of course, moviegoers can also do better in the future as well, especially if they avoid this one at all costs. 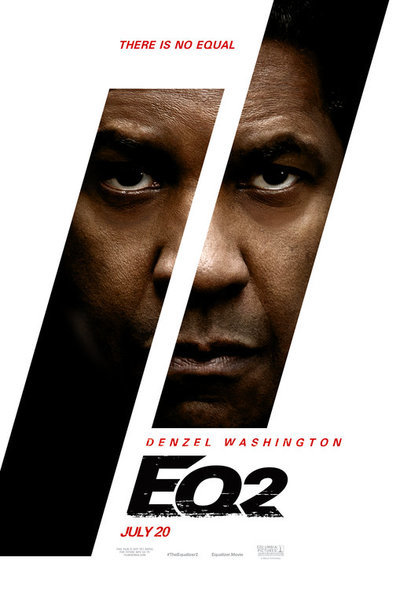 Writer (based on the television series created by)