Rarely have so many charismatic actors been used in a film that feels quite as soulless as Antoine Fuqua’s update of “The Magnificent Seven.” It’s one of those projects that should work on paper. The cast is perfectly assembled, and I’ve actually been a bigger fan than most of Fuqua’s recent old-fashioned morality plays like “The Equalizer” and “Southpaw.” However, this effort, the opening night film of the Toronto International Film Festival, too often registers as hollow, an exercise in genre that has echoes of the John Sturges and Akira Kurosawa versions, but little of the charm of the former and none of the depth of the latter. The sheer talent of the cast here sometimes provides enough depth to get audience members to the climactic shoot-out, and there are a few definite MVPs in terms of ensemble, but it’s hard to envision this film having anywhere near the cinematic legacy of those that inspired it.

One of those MVPs is Peter Sarsgaard, as the fantastically-named Bartholomew Bogue, the villain of this version. Sarsgaard and Fuqua know to hold nothing back with their characterization of true evil. They practically give him a handlebar mustache to twirl. In the opening scene, after terrorizing the God-fearing people of Rose Creek, he burns their church to the ground, exiting it like the devil riding out of Hell. In fact, it’s too bad we don’t get more time with Sarsgaard in the center of the film because he understands how to embrace a villain.

On the other side of the moral coin, we meet Sam Chisolm (Denzel Washington), a bounty hunter hired by Emma Cullen (Haley Bennett), one of the citizens of the aforementioned Rose Creek. Chisolm is a man of justice—introduced dressed all in black, riding a black horse. He is the square-jawed and silent type, which doesn’t allow Washington many opportunities to show his natural charisma or leadership abilities. He has a few good scenes of chemistry with his fellow stars, but Chisolm is too dull of a hero for an actor this talented and this typically enjoyable to watch.

Chisolm assembles, you guessed it, six men to help defend Rose Creek from Bogue and his minions. First, there’s the drunk Irishman Faraday, played with expected whimsy by a very good Chris Pratt. We also meet one of Chisolm’s old colleagues, the PTSD-plagued Goodnight Robicheaux (Ethan Hawke) and his right-hand man Billy Rocks (Byung-hun Lee), who’s quick and vicious with a blade. Chisolm decides to let one of his bounties live and so the fifth “Magnificent” becomes Vasquez (Manuel Garcia-Rulfo). The group is filled out with a Native American named Red Harvest (Martin Sensmeier) and a possibly unstable gentleman named Jack (played by the king of the possibly unstable, Vincent D’Onofrio).

As usual, the structure of “The Magnificent Seven” is somewhat beautiful in its simplicity. An evil man must be stopped, and so seven guys get together and form an unexpectedly powerful team by combining their unique skill sets. As there’s not much to the narrative of a film like this one, its success or failure comes down to execution. And this one is too often flat. I kept waiting for it to click into gear, to use the joyful personalities of actors like Washington and Pratt to an end that felt like it was doing more than servicing the incredibly straightforward plot. Way too much of “The Magnificent Seven” plods from point A to point B to point C. And one can really feel this lack of momentum when the film does briefly spark to life. For example, seeing “Training Day” stars Hawke and Washington reunited and given one of the film’s only true dramatic scenes provides some much-needed depth of character, but it just never turns into a flame.

Part of the problem is that too much of this “Magnificent Seven” appears manufactured on a backlot. There’s zero sense of period and setting. Never once did I sense I was watching characters in a story so much as a talented group of actors assembled to create a product. The dialogue references concepts like righteousness and justice but there’s little sincerity in any of it. Part of the problem is also that “The Magnificent Seven” feels like a modern summer blockbuster as much as it does an ode to the Akira Kurosawa film. We’ve seen so many “assemblage of ragtag heroes” films in the years since the Sturges movie, and this version of "Magnificent Seven" seems to have as much in common with “The Avengers” as it does a Steve McQueen movie.

For some people, just getting this particular group of ragtag heroes together will be enough. And, to be fair, we may see films with this structure, but we don’t get star-powered westerns very often any more. The star power, especially with scene-stealers like Pratt and Hawke, can be blinding enough that genre fans won't see the wasted potential. They just forgot to take advantage of it. 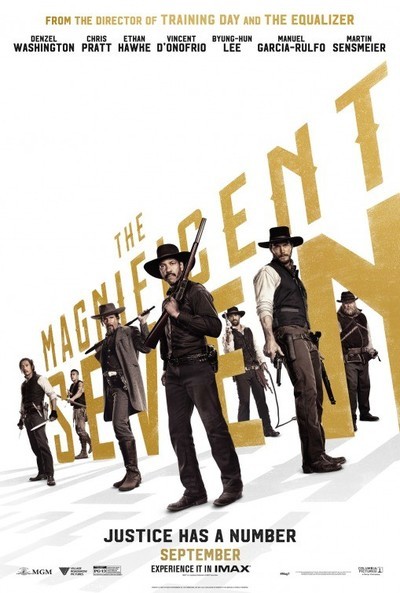 Rated PG-13 for extended and intense sequences of Western violence, and for historical smoking, some language and suggestive material.