The Con is On

The comedy thriller "The Con is On" is a Who's Who of 1990s indie film character actors, but the movie ends up delivering a lot of cliches from that brief but extremely specific era of filmmaking, and not necessarily the ones you might want.

Uma Thurman gets a starring role as Harriet, a glamorous British con artist who works with her hard-drinking partner and husband, Peter (Tim Roth), doing whatever it takes to live comfortably. James Haslam and his co-writer Alex Michaelides seem to have imagined them as cruddier, more profane cousins of gumshoes Nick and Nora Charles in the "Thin Man" series of films. The first time we see Peter, he's flamboyantly mixing drinks (and spilling a lot). Whenever we see one of them without alcohol in their hand, something seems off. They always look fantastic (Thurman especially), and some of Roth's scowling mannerisms are amusing, but this is still a film that consistently delivers less than meets the eye, even as it seems to be aiming for the sleek, sexy, knowing vibe of a Guy Ritchie heist picture or one of Steven Soderbergh's "Ocean's" films.

The movie suffers almost instantly from a case of the Try Too Hards, opening in London with Harriet accepting a package of drugs from a woman in a nun's habit (or maybe she's just a drug-dealing nun), and from there we follow Harriet and Peter to Los Angeles. They move into the Chateau Marmont, living rent-free and with a personal shopper thanks to Peter's pretending to get hit by their own car at the valet parking stand, and visit an old friend, a pedophile priest played by Stephen Fry who's connected in the underworld. Then they get embroiled in a plot to steal a priceless jewel from Peter's actress ex-wife, Jackie (Alice Eve, very amusing in her singlemindedness) so that she can pay back a debt to ferocious criminal Irina (Maggie Q), who seems to kill people in every other scene she's in, often with knives or silenced pistols.

Along the way, we meet other eccentrics, many of them played by beloved '90s indie movie fixtures, including Jackie's spoiled, abusive snot of a fiance, Gabriel Anderson (Crispin Glover, who's first introduced sitting lotus style and barking orders while he's supposed to be meditating); Gabriel's suffering personal assistant Gina, played by Parker Posey (who manages to be kooky and charming despite being given little to do; an unfortunate Posey predicament); and the leading lady of Gabriel's latest film, played by Sofia Vergara.

This is the kind of movie that seems to think a heap of outrageous details equals a characterization. Fry's priest, for instance, drops sexual double-entendres into his conversation, often seemingly to intimidate others (it's implied that he molested Peter, which plays oddly since the two actors are close to the same age), and when he invites the couple into his office to discuss business, he casually introduces his latest boy toy, a young Asian man who sneers into the middle-distance, and all of this is supposed to be hilarious on its face, just as the sight of that nun in the opening scene using curse words was supposed to send us into fits of laughter. The sheer awfulness of Harriet and Peter is endearing at times, thanks mainly to the performances of Thurman and Roth, and some of the supporting players have their moments as well (Glover and Posey especially). But a lot of "The Con is On" runs on fumes of goodwill that we feel towards the film's excellent cast.

I'm not exactly sure what the plot is, or how much of a plot there is; I don't care, because a movie like this doesn't need a plot, per se, just a string of incidents that seem to be building on each other and leading somewhere. Unfortunately, "The Con is On" doesn't really have any of that. It's mostly a collection of hipster attitudinizing with a sour and cynical undertone. I suppose the filmmakers are going for a savage satire on materialism, but the result is more often a sense that nothing passing before the camera's lens matters. It's great to see Thurman in a movie star part again. Next time let's hope it's in a better movie. 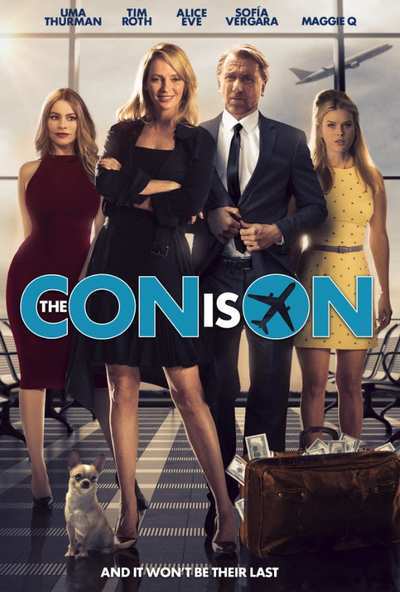