The Company You Keep

For nearly 50 years, Robert Redford has been on quest to prove he is more than a golden boy matinee idol.

Of course, Redford has succeeded in spectacular fashion, starring in such classics as "The Candidate," "Three Days of the Condor" and "All the President's Men"; winning the Oscar for directing "Ordinary People" (somehow besting Martin Scorsese and "Raging Bull"), and founding the Sundance Film Festival.

Yet like so many great stars before him, Redford, now 76, steadfastly refuses to go gently into that good grandfatherhood. In "The Company You Keep," he looks and moves like a really fit, handsome 76-year-old — a real distraction, given he's playing a former 1970s radical who now has an 11-year-old daughter and is living a quiet life under an assumed name.

OK, sure, guys in their 60s become fathers — but the timeline of "The Company You Keep" tells us Nick Sloan (Redford) is a former member of the Weather Underground wanted for his part in a bank robbery from some 30 years ago in which a security guard was killed. So was Sloan in his mid-40s at the time — or are we supposed to believe he's about 60 now?

This is but one of the distractions in "The Company You Keep" that kept me at a distance. Despite Redford's sure-handed (but typically stolid) direction, an intriguing premise and a cast filled with top-line talent both veteran and relatively new, nearly every scene had me asking questions about what just transpired when I should have been absorbing what was happening next.

In casting almost too perfect, Susan Sarandon plays Sharon Solarz, a Vermont housewife who waves goodbye to her husband and teenage children, and prepares herself to be arrested for her part in that long-ago bank robbery. Why now? Her motivation isn't entirely clear. When Solarz grants a jailhouse interview to hungry young reporter Ben Shepard (Shia LeBeouf), she justifies/rationalizes the Weather Underground's use of violence, while he just sits there lapping it up. It's up to an FBI agent (Anna Kendrick) to call bull---- and tell Ben she found Solarz's speech offensive. (She's right.)

Meanwhile, the walls are closing in on Nick and other members of the Underground, including a grizzled old radical named Donal (Nick Nolte) and Mimi (Julie Christie), Nick's former lover, who's still beautiful and still full of righteous "Fight the Power" radicalism.

The top-heavy casting almost works against the story, despite the talents of all involved. Hey, there's Chris Cooper as Nick's brother, whom he hasn't seen in 20 years! Look, Richard Jenkins as another former Weatherman, now teaching! And hey, Stanley Tucci as the obligatory "In my office, now!" newspaper editor, and Terrence Howard as the determined FBI investigator! And sure enough, that's gravel-voiced Sam Elliott as yet another former radical. It's almost an upset we don't get Christopher Walken as the Guy Who Made the Bombs or Jane Fonda as the War Protester.

When Nick finds Mimi in a remote cabin, "The Company You Keep" assumes the tone of a bittersweet romance. Their exchanges are just…perfect. Nolte provides comic relief, and Jenkins is utterly believable as Jed, the professor who reluctantly assists Nick and then tells him, "Please believe me when I say I hope I never see you again."

It's difficult to believe that Shepard, the small-time, ethically challenged, marginally talented newspaper reporter, is able to find so many answers that eluded the FBI for decades. As "The Company You Keep" adds more characters and ladles on the soap-opera twists, we get further and further away from those early, riveting scenes with Sarandon (who disappears from the movie) and other Weather people now living law-abiding lives under assumed names.

As for Nick Sloan, he's the one ex-Weatherman character we don't believe as a former activist so committed to the cause he would engage in acts of domestic terrorism on American soil. Of course a lot of real-life radicals from the 1960 and 1970s served their time, expressed their regrets and then created productive, peaceful lives for themselves. (Some haven't apologized enough or been punished enough to suit everyone.) But this community-oriented, tousle-haired senior citizen who likes to go for morning runs and dotes on his young daughter? THIS guy was running with outlaw rebels who believed such acts as bombing government buildings and robbing banks and killing innocent family men such as that security guard were justifiable?

Neither the script nor Redford's performance ever leads us to believe he was ever the kind of guy who would keep that kind of company, even back in the day. 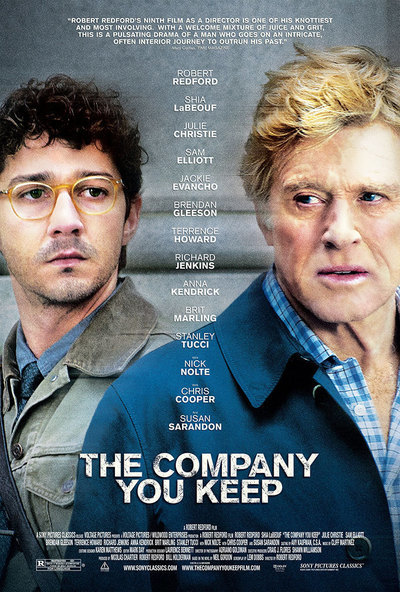