The producer and sometime writer/director Art Linson is a man of taste (he helped get “Melvin and Howard,” “Heat,” and a bunch of other great, good, or notable films get made) and also a veritable mother lode of showbiz lore. His 2002 book, an almost-tell-all called “What Just Happened?” was one of the juicier reads for connoisseurs of Hollywood Inside Baseball. The book was adapted into a movie in 2008, and despite having Barry Levinson as director, the result was a bit of a sprawl, albeit with some entertaining bits and pieces.

“The Comedian,” a Linson production directed by Taylor Hackford, and also starring Robert De Niro, who took the lead in the movie of “What Just Happened?” and has a long-standing relationship with the producer, is similarly beset by a focus problem, and that’s not all. This new installment in what could be a continuing Linson semi-franchise—“Art Linson’s Tales of Showbiz”—has a whole hell of a lot going for it in the individual ingredients department. Linson provided the storyline, which no doubt has any number of a clef elements. The co-screenwriters include Jeffrey Ross, the comedian and Friar’s Club figurehead who knows where dozens of bodies are buried, the great Richard LaGravenese, and Lewis Friedman, a veteran showbiz gagman and another repository of outrageous tales. Hackford has more than a few first-rate pictures under his belt, including 2004’s “Ray” and the underseen “Blood In, Blood Out.” And the cast is spectacular, by 1980 standards and by those of 2016. Robert De Niro, Danny DeVito, Harvey Keitel (reuniting with De Niro for the first time since, um, “Little Fockers” in 2010 if I’m not mistaken), Charles Grodin, Patti Lupone, Cloris Leachman and more, with Edie Falco and Leslie Mann playing the teen roles, relatively speaking. And two raft loads of cameos from real-life comedy legends as themselves.

But the movie never builds enough momentum, emotional or narrative, to get the viewer on its side. De Niro plays Jackie Burke, an aging comic at a career impasse. Like so many movies with aging casts, this one makes a lot of hay out of seniors trying to cope with the digital world. Jackie doesn’t do such a good job of coping when, one night at a sparsely attended gig, he discovers that a couple of hecklers are razzing him not just for the hell of it, but to provide fodder for their YouTube (or something) series. Jackie head-butts the guy in indignation and winds up battling an assault charge. During his community service (the battle didn’t go his way; he also ended up doing thirty days) he finds himself serving at a food kitchen alongside Mann’s Harmony, the troubled daughter of a one-time mobster played by Keitel. The two strike up a friendship that one desperately hopes does not blossom into a romance, while Jackie juggles money troubles, opportunities for gigs, and other challenges in a way that suggest that he thrives on self-defeat in a sense.

One of the movie’s problems is that it really doesn’t make clear the particulars of Jackie’s situation early on. We know that he had once acted the role of “Eddie” in a popular television sitcom, and that the quasi-“Honeymooners” show made his name, his fandom, and whatever’s left of his fortune. But his existential/artistic quandary only becomes clear as the movie continues. By the time we seem Mann’s character looking at a vintage vinyl LP titled “The Mind of Jackie Burke” do we understand that Jackie, more than being just a comic who worked blue but got a family television show anyway (think Bob Saget) was not just a shock comic but a social commentator (think George Carlin or even Lenny Bruce). Hackford gives us a lot of nice character notes for Jackie (I particularly liked the scene where he’s ironing his own clothes while listening to a very obscure Art Blakey LP), but saving this context for last leaves the character, and some of his decisions, a little murky.

Then there’s De Niro himself. The actor has been in a lot of less than good movies over the years, but rarely, or relatively rarely, has he been in movies in which his performance could be cited as a key problem, or lack. Pauline Kael famously excoriated his work in 1981’s “True Confessions,” writing “He could be a potato, except he’s thoroughly absorbed in the process of doing nothing.” But she was a minority voice. As for De Niro’s work here, it is quite peculiar. In certain individual scenes, playing off DeVito as his much-beset brother, or Keitel’s boorish patriarchal non-fan, or Grodin as an estranged colleague, he gets a good spark going, at least for a while. But he can’t figure Burke out as a stand-up. He pitches his delivery somewhere awkwardly between his legendary “King of Comedy” wannabe Rupert Pupkin and his legendary “Midnight Run” wisecracking bounty hunter Jack Walsh. And in a scene that’s sure to be widely cited, and widely disdained, he leads the members of a senior home in a profanely altered rendition of “Makin’ Whoopee” with the ill-advised relish of his work as Fearless Leader in that Rocky and Bullwinkle film of which I try not to speak of anymore. And it’s in this cartoonish mode that the movie ultimately ends, as he looks on proudly while the end result of a drunken evening of ill-advised whoopee cops the comedian’s style. You have to see this coda to believe it. 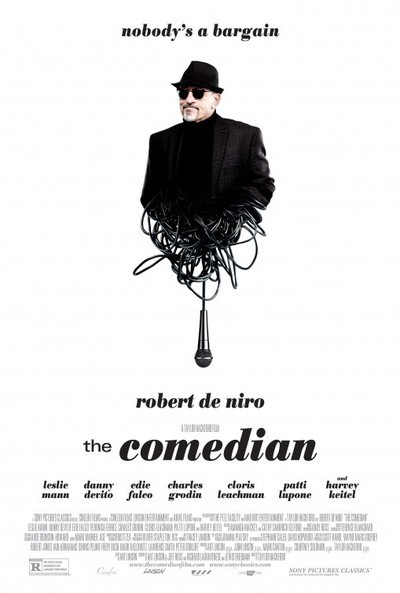 Rated R for crude sexual references and language throughout.

Cloris Leachman as May Conner