“True Confessions” contains scenes that are just about as good as scenes can be. Then why does the movie leave us disoriented and disappointed, and why does the ending fail dismally? Perhaps because the attentions of the filmmakers were concentrated so fiercely on individual moments that nobody ever stood back to ask what the story was about. It's frustrating to sit through a movie filled with clues and leads and motivations, only to discover at the end that the filmmakers can't be bothered with finishing the story.

The film is about two brothers, one a priest, the other a cop. In a nice insight in casting, Robert De Niro plays the priest and Robert Duvall plays the cop; offhand, we'd expect it to be the other way around, but Duvall is just right, seedy and wall-faced, as the cop, and after a scene or two we begin to accept De Niro as a priest (although he seems too young for a monsignor).

The brothers live in Los Angeles in 1948. It is a Los Angeles more or less familiar from dozens of other movies, especially “Chinatown” and the Robert Mitchum “Farewell, My Lovely”--A small town, really, where the grafters and the power brokers know each other (and in some cases are each other). The movie's plot is complicated on the surface but simple underneath. It centers around a creep named Amsterdam (Charles Durning), a construction tycoon who got his start as a pimp. Both brothers have had dealings with the man. When Duvall was a vice cop, he helped handle the protection for Amsterdam's whorehouses. Now De Niro, the cardinal's right-hand man, oversees the building projects of the Los Angeles archdiocese. And Amsterdam gets most of the contracts for new schools and hospitals, even though his operation is tainted with scandal.

It's tainted with more than that after the dead body of a young woman is found in a field, cut in two. Duvall's investigation leads to a madam who once took a rap for him, long ago, and to a sleazy LA porno filmmaker. Eventually, certain clues point all the way back to Amsterdam. Try to follow this closely: Amsterdam met the girl through a business associate, who met her as a hitchhiker. When he first gave her a lift in his car, De Niro was another passenger. The movie makes a great deal of the fact that the monsignor once shared a car with the "virgin tramp," as the newspapers label the victim. But so what? One of the maddening things about “True Confessions” is that it's shot through with such paranoia that innocent coincidences take on the same weight as evil conspiracies.

The movie's emotional center is in the cop character. He's painted as a man who's not above taking a bribe. But at the same time he has a moral code that's stiffer than his brother's. (The monsignor, for example, isn't above rigging a church raffle so that a city councilman's daughter will win the new car.) What begins to eat away at Duvall is that this Amsterdam, honored as the Catholic Layman of the Year, is a grafter and former pimp. Did he also murder the girl? Duvall frankly doesn't care: The guy is such slime he should be arrested for the crime just on general principles.

“True Confessions” spends a lot of effort in laying the groundwork for its complex plot, but then it refuses to ever settle things. Instead, there are inane prologues and epilogues showing the two brothers years later, their hair gray, as they sigh philosophically over impending death and shake their heads at the irony and tragedy of it all--whatever it all was.

Since this isn't a thriller, we are invited, I guess, to take it as a cynical meditation on the corruptibility of man. Joan Didion and John Gregory Dunne, who based the screenplay on his novel, see the social institutions in their story as just hiding places for hypocrites and weary, defeated men. But they never follow through on their insights. The movie has, for example, a major subplot involving an old priest (Burgess Meredith) who is being put out to pasture. The priest is evidently a symbol of something, especially since the young De Niro gets the dirty job of firing him. But the movie never comes to terms with this story; it just leaves it sitting there.

At the end of “True Confessions,” we're just sitting there, too. We have been introduced to clearly drawn and well-acted characters, we've entered a period in time that is carefully reconstructed, we've seen moments between men and women that are wonderfully well-observed. But we haven't seen a film that cares to be about anything in particular, to state its case or draw its lines, or be much more than a skilled exercise in style. 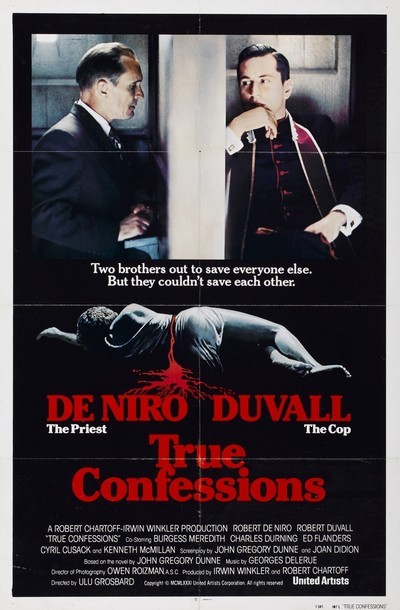