In the pantheon of creepy dolls – from Talky Tina in “The Twilight Zone” to Chucky in the “Child’s Play” movies to Annabelle in “The Conjuring” – it’s often the idea of the inanimate object coming to life and wreaking bloody havoc that’s more frightening than the actual execution. It’s a tricky thing to pull off: drawing shivers from turning a childhood plaything into something truly menacing vs. eliciting giggles at the sheer silliness of the proposition.

Such is the unfortunate – and unintentionally hilarious – case of “The Boy,” whose moody atmosphere and committed performances can’t conceal the fact that this is one dumb flick. (It’s also a flick that wasn’t shown to critics before opening day; the studio actually pulled its scheduled Thursday-night sneaks of the film, in case you were wondering whether to be optimistic.)

Lauren Cohan of “The Walking Dead” does her best, though, to take her role seriously through all its implausible twists and turns. She stars as Greta, a pretty, young American who travels to a remote English village to take a job as a nanny for an 8-year-old boy. Seems she’s got a troubled romantic past and needs to get as far away from home as possible; what she finds, though, is that she’s far away from everything else, too. When she pulls up in a chauffeured car to the Heelshires’ stately, intimidating manor, she remarks in awe: “It’s like something out of a storybook, isn’t it?” Actually, it’s like something out of every Gothic horror movie you’ve ever seen, complete with wild, misty grounds, dark stairways, hidden passages and things that go bump in the night.

When Greta meets the rigid, conservatively dressed Heelshires (veterans Jim Norton and Diana Hardcastle), who look more like the grandparents of an 8-year-old boy than the parents, she receives a strict list of rules and a routine to which she must adhere. She also meets the boy himself – who isn’t a boy at all but rather a china doll with a prim wardrobe of tiny suits and cardigans and a glassy stare. But the Heelshires, who’ve named him Brahms, treat him like a living, breathing child. They talk to him. They feed him. They carry him up and down stairs, play classical records for him and tuck him into bed at night.

“Oh, Brahms! You must sit up straight,” his mother gently scolds at one point. Later she coos, “Mommy’s so proud of you.” Ostensibly, the matter-of-fact way in which these genteel, wealthy people regard what is clearly a toy is meant to be unnerving. Are they deranged or diabolical? And Greta, as our stand-in, expresses all the skepticism and apprehension that we would in this bizarre situation. But she needs the money, so she takes the job. (Although how she found out about the gig from her small town in Montana is a mystery; the Heelshires have no Internet or cell service and seem to have stopped communicating with the outside world decades ago.)

The couple’s other employee is Malcolm (Rupert Evans), the funny, flirty grocery clerk who runs errands for them in town and comes by once a week. (His presence, like Greta’s, is a bit of a mystery. Who is he? Why do they trust him? Does he have any life outside his weekly visits? Questions abound in the script from Stacey Menear, and we’re just scratching the surface to avoid spoilers.) But Malcolm is decent enough to fill Greta in on what’s happening here: The real Brahms died in a fire 20 years ago on his 8th birthday, and the Heelshires have been using the doll as a stand-in ever since.

It all seems harmless enough despite its oddness – until the Heelshires go out of town for a long-overdue holiday and leave Greta alone with Brahms. Suddenly, she finds her belongings disappearing and reappearing and hears a child’s laughter and sobs echoing through the hallways. The doll itself doesn’t move – at first – but strange things are clearly afoot.

Director William Brent Bell stages a couple of genuinely tense moments – one of which takes place on a tried-and-true, dark-and-stormy night – but for the most part can’t decide whether to play it straight or have a little fun with this outlandish premise along the lines of Guillermo Del Toro’s ravishing “Crimson Peak.” He relies too heavily on jump scares, nightmare sequences and the general foreboding of the house itself to do the work. And so we’re in a bit of a mushy gray area in the middle where the characters’ decisions, reactions and dialogue make us laugh, but perhaps not knowingly. It’s awkward and strange but never shamelessly over-the-top enough to serve as a guilty pleasure.

The twist that explains what’s really going on here feels like a bit of a letdown, as does the climactic confrontation involving the truly evil force that’s been toying with and tormenting Greta. It’s more rote than revelatory, and the possibility of a sequel in the final shot plays more like a threat than a promise. 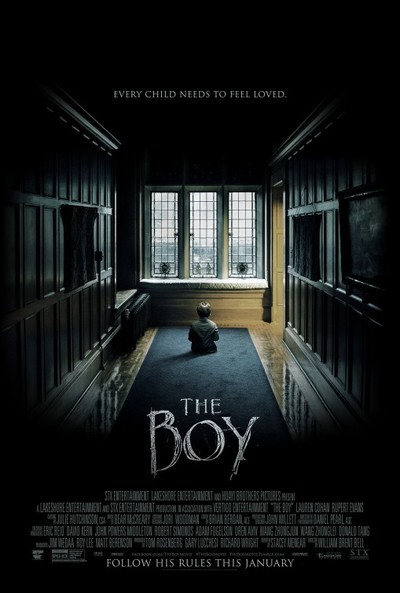 Rated PG-13 for violence and terror, and for some thematic material.