In the 1831 introduction to "Frankenstein," Mary Shelley described the genesis of her classic story. During an evening with her husband Percy Shelley, Lord Byron, and another guest, they got the idea to entertain one another by writing ghost stories. Mary Shelley couldn't come up with anything and went to bed, still thinking, and then became possessed by an image of a man lying on a table and slowly coming to life. Shelley recalled that she bolted awake, thinking, "I have found it! What terrified me will terrify others; and I need only describe the spectre which had haunted my midnight pillow.”

Director Guillermo del Toro has a similar belief that the images crowding his brain can come to life. He creates intricate worlds, overwhelming viewers with detail and drowning them with symbolism. The fact that most of what is onscreen is physical, rather than computer-generated, helps. "Crimson Peak's" atmosphere crackles with sexual passion and dark secrets. There are a couple of monsters (supernatural and human), but the gigantic emotions are the most terrifying thing onscreen. Del Toro's films can take Grand Opera emotion. In Victorian-era England, the Lyceum Theatre awed audiences with revolutionary stage effects designed to bring the horror of "Macbeth" (for example) to the audience in visceral new ways. Del Toro's style would have fit in with that. He has placed himself in a long tradition and he deserves to be there.

American heiress Edith Cushing (Mia Wasikowska), the heroine of "Crimson Peak," saw the ghost of her dead mother when she was a child, the shadow of its long fingers creeping along the wall (a steal from "Nosferatu"). As a young woman, living with her supportive father (a wonderful Jim Beaver), she prefers books to beaus, and is busy writing a ghost story ("Ghosts are a metaphor for the past," she states). When silly women sneer, "Jane Austen died a spinster," Edith replies coolly, "I'd rather be Mary Shelley and die a widow." Edith's bookish isolation vanishes when the mysterious British brother and sister Thomas and Lucille Sharp (Tom Hiddleston and Jessica Chastain) arrive in town. The two have fancy English titles, but are penniless, begging for financial backing for one of Thomas' inventions. Thomas pursues Edith with burning sensitive eyes, all under his sister's watchful glare, and Edith falls hard. An optometrist named Alan McMichael (Charlie Hunnam, who was so sensitive and heroic in Del Toro's "Pacific Rim") is also interested in Edith, but cedes ground to Thomas, albeit with misgivings. Thomas marries Edith, and he, Edith and Lucille go back to England to the family estate, Allerdale Hall.

Allerdale Hall is when the movie really begins, but those preliminary sections, the immersion into Edith's world, are equally important. America is shown as a land of garden parties, flickering gas lamps, intellectual pursuits, family life. The colors are autumnal, mustards and oranges. Lucille slashes through that mellow golden landscape in fiery-crimson dresses or heavy all-black gowns. It's often raining, creating underwater-wavery shadows on the walls. But it's a civilized world with recognized rules. Allerdale Hall, on the other hand, is a black turreted ruin of a mansion standing in the middle of empty fields. Red clay oozes up through the rotting floorboards, coating the walls of the basement. The hall inside the main entrance reaches up three stories, and because of the roof's deterioration the hall is always filled with outside weather: falling leaves or snow. Allerdale Hall is a masterpiece of design (Thomas E. Sanders was the production designer) but also of conception. The house creaks, moans, shifts. And always, always that red clay, threatening to engulf them all.

Edith, at sea in her new life and intimidated by Lucille, explores the house (by the end of the film the layout is clear, essential to the suspense of the finale). She is informed by both Thomas and Lucille that there are rooms she must not go into. Edith is surrounded by secrets, with a husband she barely knows and a sister-in-law gliding through the house with a heavy key chain rattling at her waist.

"Crimson Peak" is reminiscent of Hitchcock's "Notorious" in more ways than one (although "Rebecca" is also a clear influence). In "Notorious," Alicia Huberman (Ingrid Bergman) marries Alexander Sebastian (Claude Rains) as a cover for her attempt to infiltrate a Nazi cartel. Once in the house, she is dominated by Alexander's mother (Leopoldine Konstantin), a monstrous Fraulein from hell. Both "Crimson Peak" and "Notorious" feature ongoing visual motifs of tea cups and key-chains. There are shots in "Crimson Peak" that mirror "Notorious," a close-up of the ubiquitous key-chain with the key desired lying on the top of the heap, or the camera following a tea cup as it is carried across the room. Like Alicia Huberman in "Notorious," Edith feels if she could just get a hold of that key, and find the right lock, she might understand the secrets buried in that house, and her own destiny.

As in "Pan's Labyrinth," "Crimson Peak" creates an environment where these high stakes can operate at full throttle. The visuals of Allerdale Hall call to mind German Expressionist filmmakers, as well as directors as various as Mario Bava and Hitchcock. But while "Crimson Peak" launches associations (Gothic/Romantic tradition, Hitchcock, Shirley Jackson, Murnau, Bava, Kubrick's "The Shining," The Brothers Grimm, "Jane Eyre"), it's not just a tribute, it's a hybrid all Del Toro's own. The images themselves have tremendous power: A blonde woman sneaking through a dark house holding a candelabra. A black-haired woman stalking through an interior snowfall, carrying a tray of rattling tea cups. A man in his workshop creating toys that open their mouths to vomit silver balls. Edith sees horrors at night through doorways, down hallways. She must be brave enough to face these phantasms, to look them in the eye, to see what she is not supposed to see. On the opposite side, Thomas and Lucille must prevent Edith from seeing.

Del Toro uses a lot of old-fashioned camera tricks like wipes (as transitions from scene to scene), and there are also multiple iris wipes (where a circular shape surrounded by blackness homes in on one small image). Del Toro is old-school in his framing and camera moves, in his understanding of spatial relationships. There are times when Edith hugs Thomas, his black coat taking up half the screen, and as the camera moves to the side Edith is slowly engulfed by blackness.

The final act features a couple of monologues, as secrets pour out, and some audience members may find them too expository. But again, in the long tradition of cinema, suspenseful films often featured such final-act monologues. There is strong precedent for the effectiveness of these devices, and they're effective here too. Kitchen-sink realism is a recent phenomenon, and Del Toro's films are not bound by those requirements, although the emotions in his films are always real. As actors from before the advent of cinema (and the closeup) understood, acting needed to be big enough to fill a theatre. This did not necessarily mean hollow declaiming. It meant that their emotions had to be big enough to travel, to reach the cheap seats, to fit the scope of the story. The cast of "Crimson Peak" understands that. They're all gripping.

Watching Del Toro's films is a pleasure because his vision is evident in every frame. Best of all, though, is his belief that "what terrifies him will terrify others." He's right. 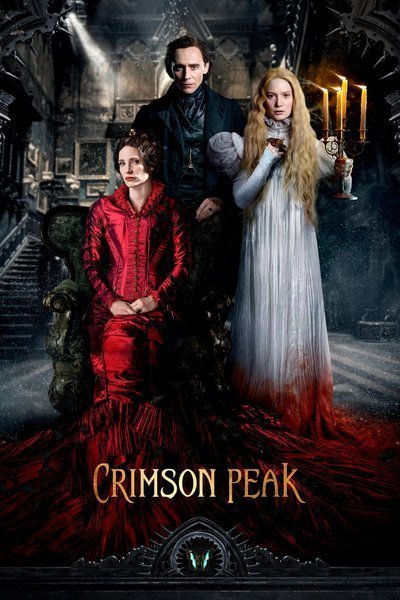