“The Assignment” is a film that arrives in theaters having already inspired vast outpourings of anger from two groups —the transgender community, which appears to be offended by its very premise, and action buffs, who are put off both by the premise (albeit for different reasons) and what they feel is a lazy execution that fails to offer the requisite thrills. While I am sympathetic to the complaints of both groups (somewhat more for the former) and recognize that it is indeed deeply flawed in many areas, I cannot quite agree with either. This is a modestly scaled B-movie by one of the best genre filmmakers of our time, Walter Hill, that has enough skill and personality going for it to make it worth checking out, even if it doesn’t quite live up (or down, depending on your perspective) to its borderline sleazy premise.

And what is that premise, you ask? In a nutshell, Frank Kitchen (Michelle Rodriguez … just keep reading) is a ruthless San Francisco hitman who runs afoul of Dr. Rachel Kay (Sigourney Weaver), a brilliant but deranged surgeon who has lost her license for conducting various rogue experiments. Frank kills Dr. Kay’s brother, and the good doctor seeks vengeance and experimental research into the importance of physical identity on the psyche. She arranges with crime boss Honest John Hartunian (Anthony LaPaglia) to have him grab Frank and bring him to her secret lab, where she proceeds to perform gender reassignment surgery on him. Dr. Kay asserts that the surgery will take away Frank’s desire to kill. Needless to say, Frank sees things a little differently, and, once she discovers that the surgery cannot be reversed, she methodically hatches a grisly revenge plot on everyone involved with her transformation from Honest John and his goons all the way up to Dr. Kay. Helping Frank in her quest is Johnnie (Caitlin Gerard), a nurse with whom Frank had a one-night stand before his transformation and who doesn’t seem particularly nonplussed by recent developments, though it seems that she may be harboring a few secrets of her own.

At first blush, one can easily understand why the transgender community might be a tad put off by the very existence of “The Assignment,” but the actual film is nowhere near as offensive as it might initially seem. For one thing, the film as a whole is so willfully and deliberately pulpy in tone (I could easily see a short version of this tale fitting perfectly into the confines of a “Sin City” film) that it is hard to take the alleged provocations on display with any degree of seriousness—this is a film that is so archetypal in nature that the sort-of sweethearts at its center are literally named Frank(ie) and Johnnie. Additionally, to suggest that Frank is meant to represent all transgender people is nonsense because he is clearly not one himself, and, outside of the obvious physical construct, little about him changes after undergoing his forced surgery. I would also point out that no less of a filmmaker than Pedro Almodovar used the notion of unwilling gender reassignment surgery as a plot point in his own unabashed genre exercise, “The Skin I Live In,” and no one seemed especially put off by it even though the deployment there was arguably more questionable from a taste perspective than what is seen here.

That said, “The Assignment” is still a problematic work in many ways from a purely cinematic perspective. The screenplay by Hill & Denis Hamill (which Hill has been toying with since the late ‘70s) is an awkward construction with much of the story presented in a series of flashbacks, as the now-incarcerated Dr. Kay recounts the story to another psychiatrist (Tony Shalhoub). This concept is especially problematic since Hill is at his best when he allows characters to define themselves purely through their actions instead of relentlessly explaining themselves as they do here. The film also screams out for a more overtly stylized visual treatment in the vein of something like his great “Streets of Fire”—a fact underlined by the occasional bits of black-and-white photography and comic book-style transitions—that might have also helped to underscore the kind of pulpy approach Hill was clearly going for. Another big problem, at least at first, is the casting of Michelle Rodriguez as Frank. There is nothing wrong with her performance but the early scenes in which she portrays the male version of Frank, complete with a wildly unconvincing beard and a lingering close-up of his genitalia for good measure, do inspire a few bad laughs right when the film is trying to establish itself. For some viewers, it may never recover from that.

For those who can get beyond that, “The Assignment” contains plenty of points of interest. Sigourney Weaver is pretty much a blast throughout as the snidely condescending doctor who sets all of the events into motion. As for Rodriguez, once she sheds the beard, her performance improves greatly. Obviously, we know she can do the steely-eyed badass stuff as well as anyone else but she also gets a couple of quieter moments amidst the chaos where she displays a more vulnerable side without stepping out of character—in one, she consults a doctor about whether the surgery can be reversed and begins shyly inquiring about certain personal details regarding her new equipment. In the other, she is about to go to bed with Johnnie when she realizes that she has no idea of how to approach lovemaking from a female perspective. (“You’ll do fine,” she is reassured in a line that is both funny and strangely touching.) As for Hill, while he is clearly working with a lower budget than usual here (with Vancouver substituting, not too convincingly, for San Francisco), he is still able to establish a convincingly noir attitude toward the material and the scenes of violence are done in a spare and economical style that is a relief from the over-the-top pyrotechnics of most current action films. (He also gets bonus points for employing Giorgio Moroder to deliver a cheerfully retro synth score.)

It is easy to see how the dramatic excesses of the plot could prove offensive to the transgender community, though I can just as easily see “The Assignment” one day becoming a cult favorite in the way that the once-controversial “Cruising” would eventually find some fans within the gay community that once scorned it. As an exercise in unapologetic pulp fiction, it gets the job done in a smart, efficient and slyly subversive manner. As the latest entry in the Walter Hill filmography, it definitely belongs on the second tier. Even though it may not be the equal to a classic like “The Driver” or “Streets of Fire,” it will do until that next masterwork does come along. 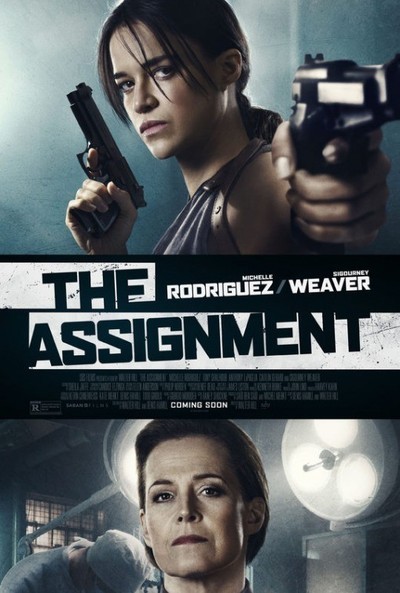