Throughout the new film written and directed by Todd Field, its title character, a person of exceptionally sensitive hearing and possibly perfect pitch, is almost constantly distracted from her vital activities by extraneous noise. The noises include a doorbell, or something like a doorbell, dinging—our title character, Lydia Tár, almost absently reproduces its two notes on her piano after being ruffled by them—a metronome ticking, people pounding on doors, and more. And the noises are rendered via an audio design that is often disturbingly precise in its directional placement—we are as startled by them as Lydia is.

I was reminded of a recording made in the 1980s by the Dadaist sample-based music group Negativland, in which they bemoaned: “Is there any escape from noise?” In our world, as in the world of this film, as it happens, the answer is "No." Or perhaps “Not entirely.” Lydia Tár’s world—conjured with incredible agility and grace and mystery by Field in his first feature film in 16 years—is one in which the near-impossible escape is attempted via music. Specifically classical music, and more specifically classical music that aspires to sublimity.

Played with fierce and seamless commitment by Cate Blanchett, Lydia Tár is one of the wonders of the classical realm. She is a virtuoso pianist, an earnest ethnomusicologist, and a purposeful popularizer—she is apparently a member of the EGOT club, which isn’t a common achievement for a classical person. And as a protean conductor about to conclude recording a cycle of Mahler symphonies, Lydia needs to get away from noise to do the work to which she almost stridently commits herself.

Is applause noise? In the movie’s opening scene, a nervous Lydia walks out onto the stage of a concert hall to rapturous tribute. She’s not there to perform, but to be interviewed, as a feature of one of those culture festivals major metropolitan centers hold every so often. Her interviewer is New Yorker writer Adam Gopnik, who plays himself in a performance possibly lacking in self-awareness—the gleam in his eye as he interviews Lydia is one of an inveterate, serenely self-satisfied know-it-all. The exposition here sets Lydia’s cultural status in a kind of stone, so the viewer looks forward to a film that will show how the sausage, so to speak, is made.

Lydia is a busy person. She has a quiet, glum, efficient assistant named Francesca (Noémie Merlant) whom Lydia addresses with less warmth than most humans would apply to Siri or Alexa. Francesca watches from a distance as Lydia, in an advanced conducting seminar at Juilliard, passionately and profanely riffs against aspects of identity culture after one of her students proclaims with flat banal arrogance that as a queer BIPOC they can’t get with Bach, on account of the composer’s patriarchal lifestyle. As she prepares to leave New York for her base in Berlin, where she’ll be recording the last symphony in her Mahler cycle, the Fifth, she lunches with a fellow conductor, Elliot Kaplan (Mark Strong), who gossips with her like a peer but who clearly envies her. She tells him of her plans for the Berlin orchestra, including “rotating” an older colleague whose ear isn’t what it used to be.

The conductor also has a pursuer, or maybe more than one pursuer. We see the back of one’s head during the Gopnik interview. We see an iPhone screen recording Lydia and texting snarky comments to someone on the FaceTime call. She is not universally beloved.

Nor is she particularly lovable. On returning home, she upbraids her wife, Sharon (Nina Hoss) for keeping too many lights on in their elaborate, in sections bunker-like, Berlin apartment. Is Sharon subsidizing the power utility? There’s some business with Lydia hoarding pills that are supposed to belong to Sharon. The couple has a daughter, Petra; Lydia dotes on the little girl constantly, and late in the movie, as Lydia’s world is flying apart, Sharon (who is also the orchestra’s concertmaster, as it happens) notes that Lydia’s relationship with Petra is the only non-transactional one in her life.

And, in a sense, this is true. As an artist, she is a constant interrogator. This is the means by which she achieves what she considers the only worthwhile end: serving the composer. She has a slightly reactionary aesthetic. While Gopnik introduces her as a champion of female composers, including Julia Wolfe, she disses the Icelandic musician Anna Thorvaldsdottir as a sexy flash-in-the-pan guilty of what Lydia considers the greatest artistic crime, that of vague intentions. (All of the musicians referenced in the film, and there are a lot of them, are real; this is, among other things, a meticulously researched work.)

But as a person, she’s selfish by default and without hesitation. She serves Lydia Tár. And Lydia has a lot of appetites. In Berlin, she is knocked sideways by news of the suicide of a former protégé. And even as she’s trying to cover her tracks in this affair, erasing emails and pressing Francesca to do same, Lydia sets her sights on Olga (Sophie Kauer) a promising young cellist, playing games with senior orchestra members to promote the rookie. Who is, as an audition scene takes pains to convey, a superb player. But still. The look Lydia gives Olga at their first lunch is almost literally wolfish.

“TÁR” is that rarest of items: a prestige awards contender that’s also a genuine art film. The narrative unspools in an insinuating, sometimes enigmatic way; Field is quite a distance from the bluntness of his last feature, 2006’s “Little Children.” Certain shots and sequences show compositional affinities with Stanley Kubrick (for whom Field worked, as an actor, in 1999’s “Eyes Wide Shut,” Kubrick’s final film) and Tarkovsky. But the formal virtuosity on display here is in a quieter register than in many other such films. That’s true for the note-perfect acting as well.

Much has already been written about how the film’s narrative draws from emerging stories of abusive and exploitative behavior by powerful people in the arts. Are the sublime aspirations and achievements of a Lydia Tár vitiated by her problem-person behavior, or is she finally In The Right Anyway? As it happens, Field’s film is almost equally skeptical of the culture from which a figure like Tár arose as it is of the contemporary strain in culture that seeks to debunk her. In the end, "TÁR" is not a diatribe or parable, but an interrogation, one that seeks to draw the viewers in, and compel them to consider their own place in the question.

Opens in New York and Los Angeles on October 7th. 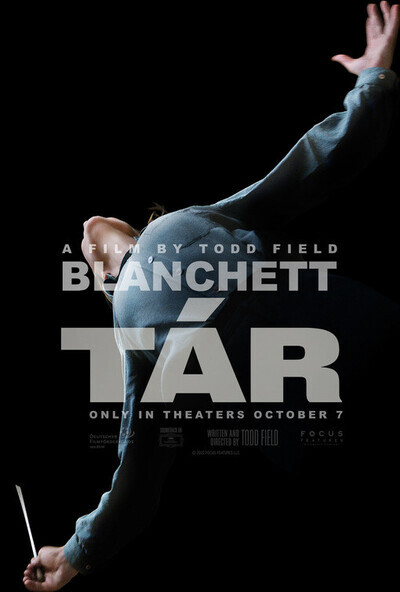 Rated R for some language and brief nudity.