Is it a compliment or a slam to say that "Sundown" could be the saddest "Curb Your Enthusiasm" episode ever?

The protagonist, played by Tim Roth, is a creature of selfishness, the kind who can surely be found in well-to-do neighborhoods all over the world. We're not supposed to like him or even particularly understand where he's coming from, and after a certain point, viewers may find themselves laughing at how blithely he throws away not just things, but people who theoretically should mean everything to him. After an introduction like that, you may find it odd that a review would urge you not to read further till you've seen the movie, but "Sundown" is more dreadfully engrossing if you know nothing about the story going in. So: make your choice.

Roth's character, Neal Bennett, is on vacation in Acapulco with his sister Alice (Charlotte Gainsbourg), niece Alexa (Albertine Kotting McMillan) and nephew Colin (Samuel Bottomley), in the lap of luxury, as it were. Then Alice gets a call informing them that their mother is gravely ill. The family cuts their vacation short, and on the way to the airport, Alice gets a second call telling her that their mother has died.

The cherry on top of the misery sundae: when they arrive at the airline check-in counter, Neal shamefacedly says that he's left his passport back at the hotel. Distraught as the family is, they offer to stay at the airport and wait for him to fetch the passport so they can face the tragedy together, on a later flight. Neal assures them that it's better if they go on without him and let him catch up.

Then Neal gets into a cab and tells the driver: hotel. Not a particular hotel: any hotel. And his vacation continues, without the family. He drinks beer and sleeps on the beach. He hangs out in markets and meets a beautiful young woman and takes her back to his room and has sex with her. Days pass, then weeks. His texts and voicemail fill up. His sister wants to know where he is, and if he's OK. He does not respond. Yes, he's lost his mother—but so has his sister, and she isn't abandoning the family in time of need. What's going on here? A need to blow it all up? To reject the privileges accumulated over a lifetime, as other fictional characters, including some of Michelangelo Antonioni's bored rich folks, and Don Draper on "Mad Men," sometimes did?

We are belatedly informed that the siblings are fabulously wealthy, thanks to their co-ownership of pork-rending facilities (though Alice does most of the work, it seems). Around that point, things take a nasty turn, with the Bennetts seemingly being punished, or maybe being subjected to karmic payback. But the misfortune is staged in such a way that we can't be sure if it's the cosmos rearranging itself on the side of the workers and against capitalist piggishness or if the family just caught a string of bad breaks.

In the greater scheme, it's preferable for a film to leave us unsure what to think about its message. Most (though not all) movies that go an agitprop direction are condescending, flat, and annoying, and make you wonder why the storytellers spent the time and money to make a drama rather than, say, renting a billboard. But if you go too far in the other direction, as I think this "Sundown" does, you leave the audience unsure as to what, exactly, the storytellers are trying to say about their people, their milieu, and their subject.

This in turn leads to the question of whether there's some larger purpose behind the enterprise, or if the filmmaker just enjoys composing impeccable frames with a jerk at the center of them, watching him do bad things, then punishing him and letting the audience off the hook by feeling as if some form of justice has been done. This film's portrayal of upper class white Europeans is hardcore-leftist in presentation, but the execution is bourgeois, like an old gangster film that ends with the gangster getting machine-gunned to death on the steps of the church whose teachings he used to mock.

"Sundown" is written and directed by Michel Franco, a Mexican filmmaker whose work is steeped in a kind of cool blank regard of suffering that can read as nihilism, and perhaps should be read that way, though it's hard to tell for sure. The filmmaker behind art-house horror shows set in the real world, such as "New Order" and "Daniel and Ana," as well as hard-edged social dramas like "Through the Eyes" and "Chronic" and the sexually explicit coming-of-age movie "After Lucia," he's been accused of exploitive imagery and scenarios even as he's been praised for going places that most movies don't dare go.

He's on record as being a fan of Michael Haneke ("Funny Games," "Cache") and shares that director's affinity for treating people as the emotional equivalent of insects for a cruel boy to dismember, along with an icy, no-judgments tone that (deliberately?) makes the audience wonder if he really does have substantive things to say about the awfulness that he shows us, or if he's mainly there for the awfulness, and the gestures towards sociopolitical statements are mainly a pretext for transgressive images.

"Sundown" won't clear up any of those mysteries, such as they are. And even as the movie takes a slight turn into surrealism in its final third, and becomes more overtly political as it steams towards its ending, the sum is slight and obscure. At least the running time is brief, and the movie has the good sense to cast Tim Roth (also the star of "Chronic"). Few actors are better at conveying reptilian stillness and opacity, and encouraging us to wonder what on earth is going on behind those alert yet distant eyes, as well as the motivation behind the set of a character's mouth, which might be either a grimace or a smirk. 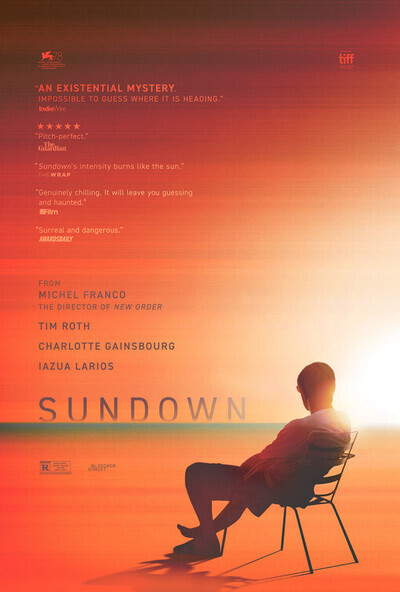