As a distaff version of James Bond in “Spy,” Hollywood’s reigning empress of ha-ha Melissa McCarthy has a license not just to kill the audience with laughter but also to slay us with her acting skills. And it’s a bust-a-gut thing of beauty to watch her give a wholly satisfying lead performance with a complete dramatic arc. Just observe how her eyes dramatically moisten in reaction to her top-notch co-stars in ways that would make Bette Davis proud. That’s even if her lips are spewing a scathing string of inappropriate R-rated putdowns.

After her misbegotten turn last summer as a down-on-her-luck sadsack in “Tammy” left even the most fervent “Mike & Molly” fans worried that the actress had lost her mouthy mojo (although her supporting part in “St. Vincent” provided some solace), it is gratifying to see her back in the arms of her best collaborator—director Paul Feig. The man behind her breakout in “Bridesmaids” and her blockbuster pairing with Sandra Bullock in “The Heat” also steps up his game. He doesn’t just shoot off a random round of in-jokes and sight gags “Austin Powers”-style. Feig also provides a decent if convoluted espionage plot—complete with tense action sequences, a surprising twist and 007-inspired opening credits—while spiked with a high percentage of gags that actually succeed.

Most of the pleasure is derived from observing McCarthy’s sweet if insecure Susan Cooper grow from CIA analyst stuck working in a dank vermin-infested bunker to a highly skilled undercover sleuth seeking the whereabouts of a stolen nuke. She is equally at ease with posing as a Midwest cat lady or engaging in hand-to-hand battle a la Jackie Chan against a female assailant in a confined kitchen space by employing baguettes, frying pans and lettuce as lethal weaponry.

But when we first meet Cooper, she is performing her duties as a field agent’s “earpiece” while live-monitoring his whereabouts via satellite images and a body cam. She’s basically a human GPS who warns of impending threats and wrong turns into danger. She yearns to go after the bad guys herself, but for now she is satisfied with assisting smug undercover dandy Bradley Fine (a very-fine-indeed Jude Law, clearly enjoying a contact high from being in such a free-wheeling ensemble romp), especially since she harbors a not-so-secret crush for him. But when it appears he has died on the job, Cooper’s exasperated boss Allison Janney (somewhat channeling her “Juno” hubby J.K. Simmons) decides to take a chance on sending her to Europe to hunt down the bad guys.

As seen in previous films, McCarthy works best with others and Feig here provides a fine array of foils. British funny lady Miranda Hart is a true find for anyone who hasn’t seen “Call the Midwife” on PBS as Cooper’s well-meaning if clumsy sidekick Nancy who fills in as her earpiece. At 6-foot-1, Hart looms over McCarthy and everyone else, and the two fit nicely into the mismatched tradition of Abbott and Costello and Laurel and Hardy.

Someone, of course, has to be the cold-hearted villain and that would be “Bridesmaids” alum Rose Byrne. With an elaborate hairdo that could double as a Byzantine sculpture and a constant look of disdain, Byrne crosses paths with Cooper when the agent poses as her bodyguard and the two take an instant dislike to each other. While McCarthy is no slouch in the insult department, Byrne’s posh demeanor allows her to get away with some rather vile verbal slaps that would otherwise leave viewers groaning.

But McCarthy truly meets her match in the form of British action star Jason Statham, who goes wonderfully bonkers as a bratty rogue agent named Ford who is incensed that a newbie like Cooper is on the case and shows his disgruntlement by constantly bragging about his manly feats of yore like a Cockney Paul Bunyan (“I’ve swirled enough microchips to shit a f—kin’ computer”).

But what I found myself most appreciating about “Spy” went beyond the bouncy and brassy McCarthy’s regular servings of tasty bits of business—dubbing her fists Cagney and Lacy, telling a stunned Swedish henchman to cut off his own manhood and stick it on his forehead like a unicorn’s horn, or accidentally mistaking a mushroom-like hot towelette for an appetizer. Instead, it was how Feig and company take the piss out of all the macho grandstanding and chauvinistic attitudes ingrained in the spy genre. That would include Nancy’s observation that Ford’s tweed cap makes him look as if he is from the cast of “Newsies.” But, mostly, McCarthy and her femme cohorts are too busy doing their jobs to be bothered with the sexist come-ons by the likes of Aldo, a harassing lug of a guardian who mostly wants to protect Cooper’s breasts. Although Hart’s Nancy does take a detour to get to hang with rapper 50 Cent (a cameo that pays off better than one would think).

All is not perfect, however. Having a male land atop a woman in an awkward position is sort of amusing once but not twice. And, as was the case with the crime caper “The Heat,” an excess of violence does get the point across that dames are as tough if not tougher than the dudes. But when thugs begin to pile up with reckless abandon and McCarthy’s Cooper barely flinches as she shoots her foes dead, it distracts from rather than enhances the humor at hand. But the true measure of a comedy is always how much you actually laugh. As long as the chuckles exceed the body count, all is good. 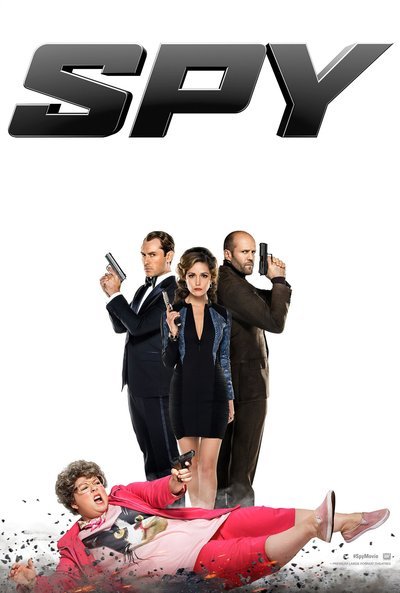 Rated R for language throughout, violence, and some sexual content including brief graphic nudity

Will Yun Lee as Timothy Cress