Melissa McCarthy has enough clout in this town and in this industry, following standout performances in the massive box-office hits "Bridesmaids," "The Heat" and even "Identity Thief," to make pretty much any movie she wants. She’s used it to make "Tammy," a comedy she stars in, produced and co-wrote with her husband, Ben Falcone, who’s directing his first feature.

"Tammy" provides McCarthy with the opportunity to do yet another version of the persona she’s honed: a brash, trash-talking woman whose seemingly over-inflated sense of self masks a vulnerability and a need for acceptance and love. That this type of character also has a subversive sense of humor keeps us on our toes and keeps the shtick somewhat fresh. McCarthy has a way with a tossed-off ad lib—an aside or an observation or an insult—that provides some clever surprises when you think you’ve got this person all figured out.

I wonder what else she has in her bag of tricks, though. She’s clearly a gifted and fearless comedian, both verbally and physically. "Tammy" offers glimmers of greater dramatic depth, but while it’s much funnier than it looks, it also features moments of attempted poignancy that don’t always feel earned.

The quality of the cast—which includes Susan Sarandon, Kathy Bates, Allison Janney and Mark Duplass, in a further sign of McCarthy’s power—certainly elevates the premise, which is essentially your standard, desperate road-trip comedy.

When we first meet Tammy, she hits a deer while driving her junker car to her lousy job at a third-rate fast-food restaurant. Arriving in a more late and slovenly state than usual, she promptly clashes with her uptight assistant manager (Falcone himself, who’s been her frequent co-star). He fires her, which means she goes home early, which means she finds her husband (Nat Faxon) having a romantic, home-cooked dinner with next-door neighbor Missi, played by a woefully underused Toni Collette. (Seriously, she gets maybe three lines. It’s a massive waste of a huge talent.)

And so, as she’s done so many times before, Tammy packs up her random belongings and her hideous wardrobe and threatens to leave her small Illinois town, a place so insular and stunting that her mother (Janney) and grandmother (Sarandon) live two doors down. This time, she makes it past the city limits, though, with the help of Grandma Pearl’s Cadillac, Grandma Pearl’s wad of $6,700 in cash and Grandma Pearl herself. Desperate for an adventure, Pearl offers to go along for the ride. She’s also a diabetic who’s forgotten her meds as well as a full-blown alcoholic, which complicates matters.

If you’re not distracted by the fact that Sarandon is a mere 24 years older than McCarthy and that her sexy, sly demeanor still shines through beneath her scruffy, silver wig, perhaps you’ll feel encouraged to go along for the ride, too. “Thelma & Louise,” this is not, but the two actresses do have a sparky chemistry with each other. McCarthy is aggressive and foul-mouthed while Sarandon is sensible and laid-back. And they’re clearly destined for trouble, which leads to solid if scattered laughs.

Their convoluted circumstances include the promiscuous Pearl’s sexual connection with a randy, older barfly (Gary Cole), while Tammy unsuccessfully flirts with his sweet, shy son (Duplass). While it’s always a joy to see the versatile, natural Duplass, his character feels frustratingly underwritten here, rendering hollow the supposed romance that develops between him and Tammy.

A Jet-Ski accident, a fast-food restaurant robbery, some brief jail time and a lavish July 4 party at the home of a wealthy lesbian (a no-nonsense Bates) and her partner (a barely-there Sandra Oh) also await. But between these antics, Pearl and Tammy must work though decades-old resentments and failures in order to get both of their lives back on track. The attempt at achieving both zany comedy and emotional depth requires a light touch that sometimes eludes Falcone. But the intention is admirable, as is the focus on flawed female characters and the way they relate to each other.

“Tammy” passes the Bechdel test, for those of you keeping score at home. But while Tammy herself is a meandering mess with no real purpose in life, there’s clearly a good heart beneath the disheveled exterior. At least, there are hints at it. McCarthy has made sure that her movie is kind enough to its characters to try and find that out. 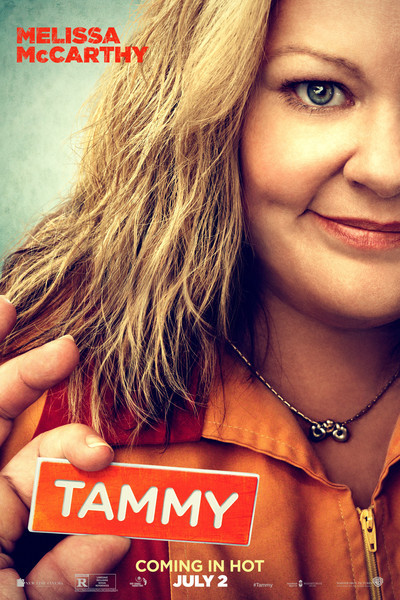