There's a scene in "The Heat" in which two people, FBI agent Sarah Ashburn (Sandra Bullock) and Boston police detective Shannon Mullins (Melissa McCarthy), struggle with one another to be the first to open a door. It has already been established that Mullins resents the snooty interference of an FBI outsider into her case. We also know that Ashburn has problems getting along with, well, anyone. Ashburn and Mullins are forced to work together to bring down a Boston drug kingpin, or something like that — it doesn't matter — and for the majority of the film they bicker over whose case it is, whose interrogation style to follow, who knows more about the background intel.

All of that comes to comedic fruition in a lingering slapstick scene of the two women in a death-grip with the door, unable to move forward, unable to retreat, both willing to look completely foolish in order to be the first one through that door. Director Paul Feig (who helmed "Bridesmaids") knows his way around slapstick moments such as this one. He is confident that the event being filmed is funny and worth watching, so he stands back, points the camera, and lets the actresses go to it. It's a very funny bit of physical comedy, deeply logical (neither character can bear to be "second" in anything) and yet deeply illogical (who cares who goes through the door first?).

It's a pleasure to watch a film that is confident in what it is. Yes, it's a cop-buddy film, and of course there is a case to be solved. But nobody cares about the familiarity of the premise. You get the sense that Paul Feig doesn't care either. The Boston-drug-lord-plot is merely the architecture on which to present the dynamic of the two main characters. Their dynamic is consistently humorous, entertaining, often cringe-inducingly awkward, and, occasionally deep. The pace of the film is uneven, and the big plot-points are presented so casually that you can almost feel how bored everyone is by having to spend time on them, but Bullock and McCarthy make a phenomenal team. The conversation never stops. The arguments never stop. You can forgive a lot if a film shows you watchable, interesting characters.

Sarah Ashburn lives alone, is a workaholic, and kidnaps the neighbor's cat periodically in order to get some affection. She is gunning for a promotion at the FBI. Her boss tells her she needs to work on her people skills, and as a test he sends her up to Boston to try to bring down a drug kingpin. Working with the local agencies has been a problem for Ashburn, who strides around so arrogantly that she has to be told no less than five times in one scene that she is going the wrong way. On the other side of the spectrum sits Boston Detective Mullins, wearing a Paw Sox T-shirt (a perfect detail), and wreaking havoc amongst neighborhood thugs and small-time drug dealers and prostitutes. The rest of the department lives in fear of her, and within two seconds of spending time with Mullins you can see why.

Ashburn is assigned to investigate Mullins' case. They are supposed to work together. Neither character is okay with the partnership. This is clichéd stuff, the mismatched battling duo, but it's worked in comedies since the beginning of time and it works here. Ashburn is buttoned-up (both emotionally and physically), and Mullins lets it all hang out. Each are equally horrified by the other. Clichés are avoided. Bullock has played cops before, and she does officious bureaucratic-speak very well, but here she adds a flicker of panic and need in her eyes which makes her awkward and pathetic. You can smell her misery. And perhaps the most tragic sight I will see all year is Bullock standing miserably in the nightclub bathroom, mortified because her Spanx have been revealed. Mullins has an active sex life (she is approached twice by men who wonder why she never called them: "I thought we had fun the other night"). Unlike Ashburn, she seems comfortable in her own skin. The character is is reminiscent of Megan, whom McCarthy got an Oscar nomination for playing in "Bridesmaids." That movie's pooping-in-the-sink scene got a lot of commentary, but I was more fascinated by the fact that McCarthy's character worked at some high-level government job, bought an 18-wheeler for no reason, had zero neurosis, and was in many ways "having it all", something none of the other characters can say.

Working the case brings Mullins and Ashburn into contact with a series of crackpots and weirdos, an albino D.E.A agent (played by Dan Bakkedahl; "You look evil as shit," comments Mullins, a conscious callback to the albino villain in "Foul Play", seen on a television earlier in the film), a nasty drug addict named Tatiana (the hilarious Kaitlin Olson, who only has one scene, and kills it), and an exhausted white-haired police sergeant who says, "This job is destroying me. I'm 43. My son calls me Grandpa." Mullins comes from a big crazy Boston family whose members are no longer speaking to Mullins because she put her own brother (Michael Rapaport) in jail. Mullins' own mother (played by the criminally underused Jane Curtin) slows down the car as she drives past Mullins, holding up her middle finger.

"The Heat" is violent, with some pretty gruesome moments and some questionable police work. That's part of the fun. Cagney and Lacey these two ain't. When they finally join forces, they go rogue with a gusto that is refreshing.

The movie acknowledges the uphill battle women face in male-dominated workplaces—in this case, law enforcement—but it handles the matter in throwaway lines, an admirable choice. Neither Mullins nor Ashburn are complainers, and they know by heart the compromises they face, and they know that it will be doubly hard for them to move ahead because of their sex. But they don't dwell on it. They're too busy. When they do finally bond, it doesn't come in the usual package of relationship advice, personal revelations, or a makeover scene, although all of these tropes are acknowledged and then tweaked, turned inside out. "The Heat" turns female-buddy picture conventions on their ear. Good.

Uneven pace and irrelevant plot aside, I keep thinking of Bullock and McCarthy struggling with that door, frozen in a pointless battle of wills, bodies contorted into insane positions in order to impede the other. It's a scene that expands into an almost transcendent comic loopiness the longer it goes on. Who will win? How long can this standoff last? Don't these women realize how ridiculous they look?

They do, and that's the point. 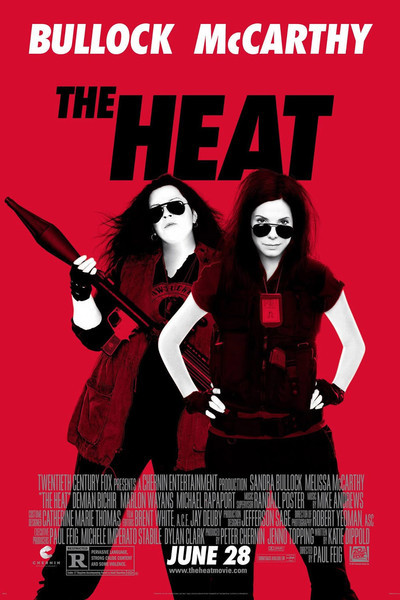