With deep pockets and the promise of creative freedom, Netflix has been luring noted directors away from Hollywood studios to create their dream projects. Bong Joon-ho made "Okja." Noah Baumbach made "Marriage Story." Martin Scorsese made "The Irishman." And Peter Berg made "Spenser Confidential," an insipid buddy-cop mystery that feels like a forgotten artifact of the 1980s.

Based on the Robert B. Parker novel Wonderland, "Spenser Confidential" stars Mark Wahlberg as a Boston cop who plays by his own rules. As the opening of this flummoxing film reveals, his rules include beating the hell out of a commanding officer because you suspect he beats his wife. Who needs evidence when you have a gut feeling?! In an age where police brutality commonly sparks headlines, that action trope has lost its charm. But this flick plays it safe by making sure that Wahlberg's white cop only beats up other white cops or white supremacists. Okay, and he brawls with some people of color, but only when they are machete-wielding drug dealers who wear hoodies and kill good, rule-following cops who are Black! See, Spenser is the good guy because he's hunting the real killer of a murdered Black officer who was framed for killing another white cop, who played by his own rules … but in a bad way, not a cool "bad boy" Spenser way! Got it? It doesn't matter.

The plot is gobbledygook, flinging out a few grisly flashbacks, a slew of stock baddies like a tracksuit-sporting hitman, and a generous slathering of police corruption. Every aspect of the story feels like a copy of a copy to the point where you might begin to experience déjà vu and wonder if you've seen this lame movie before? Maybe on some lazy Sunday where you spent half your time on your phone? Well, your time would be better spent there. Much of the cast can't even get up the energy to care about this lackluster movie.

Given dialogue that's 90% clichéd old-man moaning, Alan Arkin shrugs and mugs as the Alfred to Wahlberg's Batman. His shining moment is when he hassles some kidnappers about needing to pee. It's a cheap laugh, but his annoyance seems genuine. In an abrupt cameo, grumbling podcaster/comedian Marc Maron tosses his agita shtick into a brief rant about "fake news bullsh*t." Though in the thankless role of Spenser's former partner, Bokeem Woodbine brings a bit of spark with that signature smile and some line deliveries that occasionally zing. Also, face-tattooed rapper Post Malone pops up to play a Nazi jailbird. The best I can say about his performance is he seems stoked to be there! The worst is he should keep his day job.

Only one performer in "Spenser Confidential" seems to have a handle on what kind of movie she's in. Stand-up comic Iliza Shlesinger plays Spenser's girlfriend Cissy. It's a paper-thin role of the nagging bitch that exists purely to tease cleavage and be a pain in the ass to the harried hero. But Shlesinger knows that and leans in so hard that Cissy becomes a chaotic parody of this tired stereotype. She makes a meal out of this. Her Boston accent is as thick as the city's clam chowder. Her face is a parade of expressions so stark they could all be emojis. But best of all, everything she says (mostly insults) feels refreshingly spontaneous. Either Berg let her improvise left and right, or she's the only performer who managed to bring life to Sean O'Keefe and Brian Helgeland's limp script. That one star at the top of the review? That's for her.

Vexingly, Winston Duke feels woefully wasted here. The rising star who stole scenes as the growling M'Baku in "Black Panther" and impeccably pulled double-duty as hero and villain in "Us" is cast as Spenser's sidekick, Hawk. Genre expectations for buddy-cop movies might have you thinking these two characters would be polar opposites. But both are impulsive dudes with a predilection for condescension and violence. Which means there's little conflict outside of them fighting over the affections of a very old dog, named Pearl. Duke and Wahlberg's chemistry is so non-existent it almost seems like they shot every scene separately then cut it together in post. The only bit where Duke truly shines is when Wahlberg is absent.

Hawk stands in the shambles of a child's room, torn up by some malevolent gang in search of … something. A little boy stands in the door scared. He asks if this towering stranger is a giant. "Yeah, I'm a giant." A good one or a bad one? His voice deep and warm, Hawk assures he is a good giant. Then he gently but mightily helps the boy put his room back together. It's simple, but one of the few moving moments in the film.

Then, there's Wahlberg, who is horrendously miscast as Spenser. Admittedly, it's unnerving to watch this star, who has a history of real-life hate crimes, play a hero cop and white savior. But from the guy who claimed he could have prevented 9/11 if only he'd "been on that plane," it's hardly surprising that Wahlberg was drawn to the role. Here's a power fantasy where a tough guy who violently follows his gut gets to be the hero. But with a script this uninspired, "Spenser Confidential" demands a leading man with outstanding charisma to rescue it. Wahlberg isn't up to the challenge. His cocky smirk and furrowed brow aren't enough when he can't pull off the clumsy fight choreography or land a joke. A choppy edit tries to save one bungled battle scene after another; they are still laughably bad. But hey, at least those might get laughs. The jokes sure don't.

I wonder if the only director who really knows what to do with Wahlberg's bravado is Michael Bay in "Pain & Gain." There, Wahlberg's wide-eyed aggression is employed as a tool to satirize American masculinity and its toxicity. The inescapable doofiness that goes hand-in-hand with his cockiness is weaponized for cutting comedy. But here, Wahlberg blandly swaggers, stiffly falls into physical comedy and lazily drops one-liners like snot rockets. So, when "Spenser Confidential" dares to tease a sequel in its final moment, I couldn’t help but cry out, "NO!" 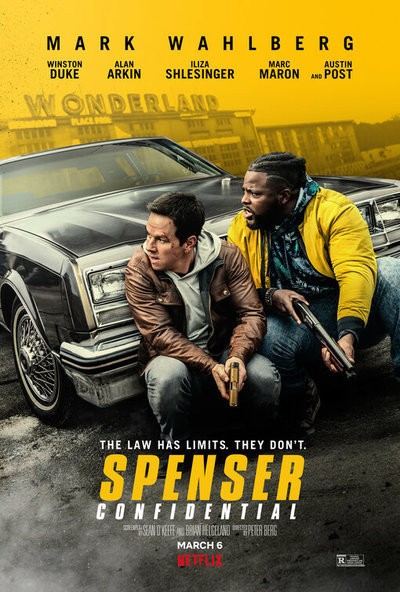 Rated R for violence, language throughout and sexual content.