Between Dwayne Johnson and a hard place

Who would have guessed Dwayne “The Rock” Johnson would deliver the best work of his career playing a guy who squares off against a pack of small-time street thugs — and winds up face down on the ground, his mug bloodied and his wallet gone.

You know, the kind of thing that would happen in real life when it's four against one, even if that one is an imposing hulk who looks like he's wearing a padded superhero suit under his shirt and jacket.

For at least the first half of “Snitch,” I kept waiting for the Big Reveal to inform us that Johnson's law-abiding, self-made trucker businessman character John Matthews was once a deadly one-man wrecking crew CIA operative who went rogue. Or perhaps he was a reformed assassin now trying to live the quiet life with his beautiful second wife (Nadine Velazquez, the flight attendant in “Flight”). Maybe that happens and maybe it doesn't, “Snitch” keeps you off-balance and guessing throughout its thoroughly involving if occasional jaw-droppingly implausible developments.

Directed with impressive action style and a surprisingly gifted touch for family emotions by longtime stuntman Ric Roman Waugh, “Snitch” relies on the well-worn cliche of the mildly rebellious teenage son who still resents his dad for leaving him and his mom for a younger wife and a new family. Rafi Gavron does nice work as John's son, Jason, who foolishly accepts an overnight delivery of a big bag of ecstasy from his idiot friend and quickly finds himself locked in federal prison, facing a minimum of 10 years and seemingly daily beatings and abuse from hard-core inmates.

This is when “Snitch” asks us to take our first and longest leap of faith. When John tells the ambitious U.S. attorney (who of course is running for U.S. Congress) Joanne Keeghan (Susan Sarandon) he'll do anything to spare his son, she tells him there's only one way — if John can land a bigger fish, she'll drastically reduce or even commute his son's sentence.

This premise is based on fact: If you're busted on a felony drug charge, there are instances where you can bargain your way to a reduced sentence or freedom if you turn snitch and help land a major player in a cartel. But believability is stretched to the breaking point as John gets in deeper and deeper, planning and executing operations that would test Donnie Brasco's mettle and experience. And why does every drug dealer from a local Missouri thug (Michael K. Williams, Chalky on “Boardwalk Empire”) to a legendary cartel operative known as El Topo (“The Mole,” played by Benjamin Bratt) seem so quick to accept John's help? Sure, he's got convenient access to big rigs, perfect for hauling and hiding drugs, but could it be that hard to buy some trucks if you're rolling in blow dough?

What makes “Snitch” relatively effective is the lack of action solutions to every problem. Don't get me wrong, there are plenty of shootouts and car chases, but despite the insanely large build that never draws a comment from a single character, John is almost always the least intimidating and lethal character in any given scene. (Except maybe — maybe — when Matthews is dealing with his wife, who is NOT thrilled to learn he hasn't been spending his nights working late at the office.)

Everyone is excellent, notably Barry Pepper as a DEA agent with unfortunate facial hair and loyalties we sometimes question, and Jon Bernthal (late of “The Walking Dead”) as a two-time convict who gets duped by John into becoming his partner. In a mostly non-physical part that could have been played by anyone from Edward Norton to Anthony Mackie to Liev Schreiber, Johnson doesn't exactly cover the gamut of emotions flawlessly, but he's comfortable and natural onscreen. In scenes with Oscar winner Sarandon and Emmy winner Pepper, he's better than OK.

To the very end, “Snitch” almost dares you to chuckle under your breath or at least ask some pointed questions. Even the resolution left me with one “wait a minute!” problem that seemed to have eluded every character in the film.

Still, this movie executes two missions: A) to entertain us; and B) to put some big exclamation points on a couple of messages about certain drug laws in this country in need of a thorough re-examination. 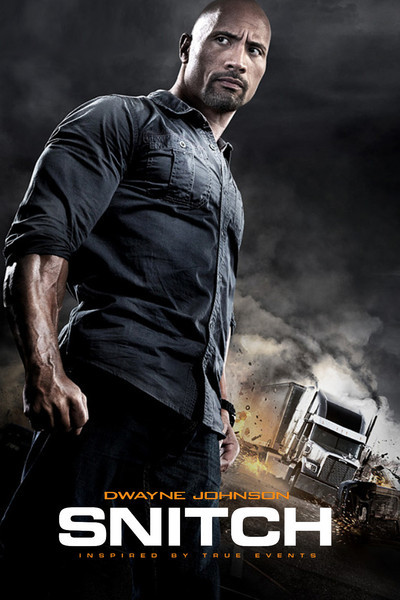 Rated PG-13 for drug content and sequences of violence