Sicario: Day of the Soldado

The follow-up to the 2015 triple Oscar nominee has lost a few key players, including Oscar nominees Johann Johannsson and Roger Deakins, along with star Emily Blunt and director Denis Villeneuve. To say their absence can be felt is an understatement. On the one hand, it’s somewhat unfair to compare the current crew to that talented quartet, but director Stefano Sollima so often mimics the first film that it’s impossible not to do so. For example, the extended shots of helicopters along the US-Mexico border return, along with an imposing score, and a few road-set shootouts. And so we’re constantly reminded of elements that were simply done better in the last film and of the importance of craftsmen like Johannsson, Deakins, and Villeneuve.

In place of that craft, we get a brutal, often ugly journey to the turmoil of the US-Mexico border. Almost as if the film was created by a screenwriting machine designed to mine current national fears and controversies as completely as possible, “Sicario: Day of the Soldado” opens with scenes of suicide bombers—one as a group of Mexicans are trying to cross the border, and, in one of the most graphically upsetting scenes in a major film in a long time, another in a grocery store in Kansas City. There we’re treated to the shot of a mother and child desperately trying to get to an exit before they’re blown to bits. It’s almost as if Sollima is laying down a gauntlet: “This will be a violent, harsh experience—leave now if you can’t handle it.” It will cross the line into gross exploitation for some people. You’ve been warned.

The bombings send Matt Graver (Josh Brolin) all the way to Somalia to figure out how and why a terrorist would come through Mexico. His investigation draws the interest of Secretary of Defense James Riley (Matthew Modine) and black ops muckety muck Cynthia Foards (a horrendously wasted Catherine Keener), who tasks Graver with, well, creating chaos across the Mexican border. The US Government wants to pit the cartels against each to disrupt the ecosystem and keep them focused on their rivals instead of anything else—that and the US Government thrives on international drama, of course. So the plan is to kidnap the daughter of one of the cartel kingpins, a man named Carlos Reyes, who just so happens to be the man that Alejandro (Benicio Del Toro) has sworn vengeance against. Matt brings in Alejandro and gives him carte blanche to do what it takes.

Once “Day of the Soldado” picks up steam, there are some undeniably well-done sequences, including a harrowing ambush on a Mexican road, and the performers are all strong. Brolin can do this kind of strong-chinned military leader thing in his sleep, but he adds an intriguing (if underdeveloped) undercurrent of rebellion to his character, sketching in a man who will follow orders … to a point. But, once again, the movie is Del Toro’s. He remains one of our best actors, finding ways to deepen minor beats in a movie that doesn’t really allow for pauses for subtlety.

And that’s part of the problem. There’s a difference between a movie that uses extreme violence for a purpose—either thematic or artistic—and one that just feels like it’s using extreme violence because it can't think of anything else to do. The carnage in “Day of the Soldado” becomes numbing to such a degree that it’s hard to care about what happens next. In fact, the final scenes feature a character with dead eyes, shocked into silence and left emotionless by what has unfolded. I felt the same way, wondering what the message or artistic drive of the two hours of bloodshed that came before was intended to convey. The theme of international chaos that once defined places on the other side of the world coming to the US border is there but relatively unexplored. Everything here feels shallow, particularly when you get the sense that it’s all merely set-up for a third film. “Sicario” stood on its own, but this seems like a work that has almost no power without the film that came before it, and may actually only work once we see the film that comes next (writer Taylor Sheridan has said that he envisioned a trilogy).

Some will be turned off by the exploitative violence and some by the shallow storytelling, but what struck me most about “Day of the Soldado” was the predictability of it all. We meet a young man who is drawn into a life of crime as a coyote for a powerful crime syndicate, and he’s a complete non-character, the kind of person that you know only exists in a movie like this to eventually cross paths with the characters played by the names above the titles. Everything around Alejandro and Matt feels expendable, and it makes one realize how mindless violence is a poor substitute for nuance, character, or commentary. Not every movie needs to feel like it has something to say, but it’s always annoying when a movie thinks it does but nothing comes out. 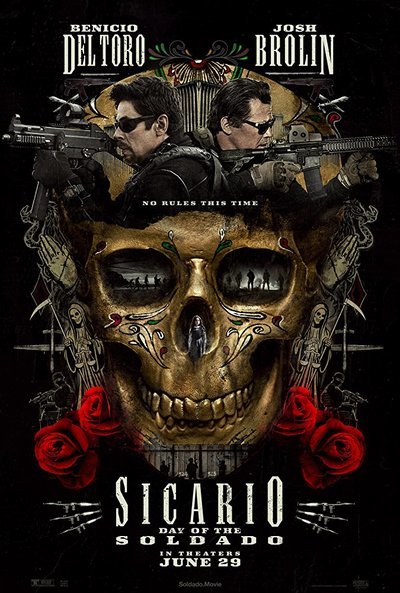