“Sicario” opens with two indicators of a violent world, one a discovery and one an explosion, both setting the stage for the satisfying thriller that follows. This is a universe in which evidence of evil exists in plain sight, hiding in the walls of a house in suburban America. And it is a world in which violence can erupt in the blink of an eye, taking lives and shattering others. At times, “Sicario” is a deeply satisfying, intense examination of a war with no rules of engagement, driven by a spectacular performance by Benicio Del Toro and typically mesmerizing cinematography from Roger Deakins. At other times, especially in its middle act, “Sicario” can be frustratingly self-indulgent, filled with overhead helicopter shots of the Mexican border and a thumping, pretentious score. It’s a film that lacks the urgency of the really great thrillers, but exists in that rarefied air of refined production values on every level and a flawless ensemble. That it falls short of greatness could be considered a disappointment, but there’s still much to like here.

That opening scene features FBI Agent Kate Macy (Emily Blunt) trying to find a kidnap victim in an Arizona home. She literally barrels through the wall in her truck, and just takes down a target as he unloads a shotgun in her direction. The shotgun blasts a hole in the wall, revealing a dead body, wrapped in plastic. And this cadaver is not alone. Soon, they discover the home is filled with corpses, and their investigation leads to an explosion. What is going on? What horror has crossed the border from the notoriously lawless town of Juarez to Arizona?

Macy’s fearlessness and quick wit draws the attention of her superiors, and she’s brought in on a meeting for an inter-agency task force. Led by a mysterious, professionally undefined (he could be CIA) man named Matt (Josh Brolin), the people behind this task force like what they hear from Kate. They bring her aboard, and Matt, Kate and the mysterious Alejandro (Benicio Del Toro) head South to capture a drug trafficker and bring him back to the States for questioning. This sequence alone justifies a look at “Sicario.” Venturing into a part of the continent in which drug lords have become so prominent that dead bodies hang in public places as messages, the team has to act quickly. On the way back from Mexico, they get stuck in traffic at the border. Cars around them could contain the drug trafficker’s cronies, waiting to strike. This scene is a master class in the production of tension. Deakins uses car windows beautifully and editor Joe Walker seamlessly cuts the action together. That the movie never tops this sequence again is where the problems arguably start. We open with such intensity that the lack of sizzle in the second act starts to take a toll.

Part of the problem is that Taylor Sheridan’s script doesn’t really develop a protagonist. Kate is too often an observer, an unwilling and uninformed traveler on this journey. Brolin’s Matt and Del Toro’s Alejandro are so clearly in charge of what’s happening that they’re thinking of moves several machinations away while Kate is unclear of not only what role she’s supposed to play but what roles everyone has as well. I get that this sense of confusion is part of the point. “Sicario,” at its core, is about a world in which the lack of leadership on either side of the drug war has created complete chaos. And so it makes sense that it would feature a protagonist equally confused by the lack of ground rules. However, this makes for a film that doesn’t have the emotional punch of the best thrillers, at least not until the final act when the tables are turned, and we realize that we may have been focusing on the wrong story all along.

Despite the issues I have with the narrative of “Sicario,” it’s impossible to deny the technical elements that are so far above average, and Denis Villeneuve’s skill with directing actors. He draws a great performance from Brolin as the kind of guy who enjoys keeping those around him uninformed. He considers intelligence as a tool to an upper hand. Del Toro has a very different purpose, one that’s slowly revealed, and he’s simply magnetic here. He steals every scene he’s in. Blunt is typically excellent as well, even if it feels like the underdrawn nature of her character is the film’s biggest flaw.

By the time “Sicario” gets to its final act, and Villeneuve and Deakins approach “Zero Dark Thirty” territory through strikes under the cover of darkness with night vision goggles, it’s impossible to nitpick the screenplay. When life and death are in play, such as in that scene on the freeway, and really the entire final act, “Sicario” rises to the level I hoped it would maintain the entire time. It becomes an entire film of that opening scene—a movie of secrets and the threat of constant violence. It’s about a world that we can’t really even comprehend when it comes to its lack of order and degree of atrocities. And it’s in our backyard. 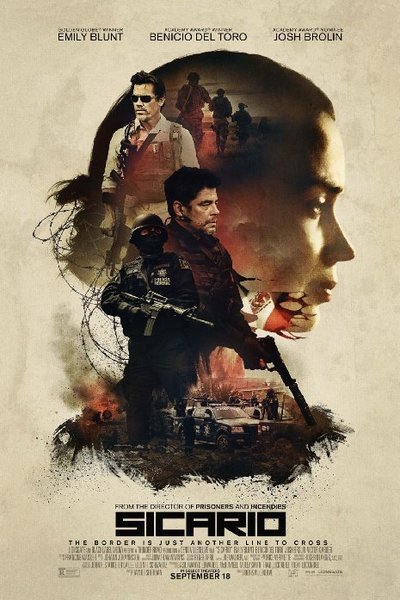