Early in “She's the One,” a beautiful woman named Hope (Maxine Bahns) gets into a cab driven by a feckless bachelor named Mickey (Edward Burns). They fall into conversation. She likes him. She's on the way to the airport but doesn't like planes, so she hires him to drive her to New Orleans. A day later, they are married. Uh, huh. Not likely--especially not in a New York cab--and yet Meet Cutes like this have been fueling romantic comedies since time immemorial, and so we go along with the gag.

Once they return to New York, reality intrudes. Mickey's brother, Francis (Mike McGlone) is angry because Mickey got married without a best man. Meanwhile, Francis is cheating on his wife Renee (Jennifer Aniston of TV's “Friends”) with Heather (Cameron Diaz).

Now about this Heather. She used to date Mickey, who knew that she worked her way through college as a hooker. They were engaged, but it ended, and now Heather is dividing her time between Francis and Poppa, a very old, very rich man we never see. Heather is described as working on Wall Street, but her job description may not be precisely what Francis envisions.

Mickey and Francis are Irish-American brothers, who along with their father (John Mahoney) like to call themselves the Fighting Fitzpatricks. They have a mother, but she is never seen in the movie, only talked about. Their father, who likes to call the boys “Sister” and “Barbara,” believes that even at their age there's no better way to settle a family dispute than by putting on the gloves and stepping into the backyard.

“She's the One” was written and directed by Edward Burns, whose beguiling comedy “The Brothers McMullen” won the Grand Jury Prize at the 1995 Sundance Film Festival. The brothers Fitzpatrick are not quite so beguiling, and the movie feels like material from the same pot, stirred and shaken, with a touch of screwball. If this were exclusively a screwball comedy--involving romantic misunderstandings and revolving doors--it might have worked better, but unfortunately Burns allows an element of Sincerity and Psychological Insight to take over, and the movie bogs down in earnestness.

The two big moral issues in the film seem rather contrived. One involves Hope who, having married Mickey within 24 hours, now wonders how to tell him she plans to leave for Paris in the fall to study at the Sorbonne and expects him to come along. My own notion is that a part-time cab driver so unattached he can get married in 24 hours is probably not going to balk at the idea of a trip to Paris with his beautiful new wife. But the movie treats Paris as a feminist issue: Is Mickey comfortable with the idea that Hope has these plans, etc., or does he have tiresome old ideas that since he's the man...etc.? (Of course Hope perhaps should have mentioned Paris during the whirlwind courtship, but never mind.) The other moral issue involves brother Francis, who is a successful Wall Street investor, making lots of money and plotting to dump his wife for his mistress. But the mistress is not so sure she wants to be married to Francis, and there's Poppa waiting in the wings. He may pack a colostomy bag, but he knows How to Treat a Woman, which is, in a movie like this, something the hero will never, ever understand. Diaz (“The Mask”), as the mistress, proves again that she is a real actress, in addition to being one of the most beautiful women in the movies; it's interesting how she lets Heather maintain a certain privacy and reserve, so that we can't make easy assumptions about her.

Around they go, the Fighting Fitzpatricks, with the action punctuated by fishing trips during which Dad imparts wisdom that it takes all of John Mahoney's considerable skill to keep from sounding as if it had just been downloaded from Edward Burns' word processor. Many of the scenes will create a sense of deja vu if you've seen “The Brothers McMullen”; Burns and McGlone play roles very similar to their characters in the earlier movie, and Bahns' character is not a million miles removed.

Although the movie disappointed me, it did not dishearten me about Edwards Burns as an actor or filmmaker. He knows how to move a scene, and he has a nice feel for the ground-level human touches that make his characters real.

His future, though, may be as an actor: He and Bahns both have genuine star power, and it would be interesting to see them in the hands of a director more willing to exploit their attractiveness and charisma.

If Burns wants to continue at the helm, however, I hope he expands his reach. By that I don't mean abandoning his Irish-American worldview and the characters he finds there, but deepening and pushing and testing. “She's the One” plays like an overhaul of “The Brothers McMullen” with a larger budget, and it's time for him to move on. 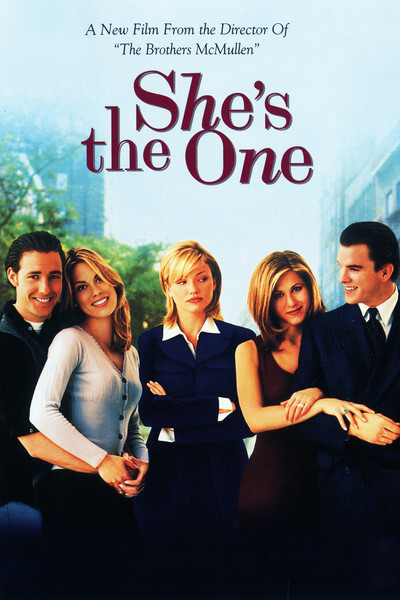