“The Brothers McMullen" tells the stories of three Irish-American brothers who are all struggling through relationships with women.

What makes it almost unique among recent American movies is that the struggles have less to do with sex than with morality. When was the last time you saw a movie set in contemporary times where the characters seriously dealt with moral choices in their lives? The brothers were raised on Long Island, and now, for various economic and personal reasons, they find themselves living under the same roof again. We meet them early in the film at a birthday party. There's Jack (Jack Mulcahy), early 30s, married to Molly (Connie Britton), an English teacher who is just turning 30.

There's Barry (Edward Burns), in the middle, who is at the family dinner with his soon-to-be ex-girlfriend Ann (Elizabeth P. McKay).

During the course of the film, all of these relationships will be shaken; some end, and new ones begin. If this were a more ordinary film the characters would have sex rather casually, as a backdrop to slick dialogue, lifestyle satire and comedy. But "The Brothers McMullen" goes its own way, and is quietly fascinating in how it invites us to ask, along with the characters, how they can do the right thing.

All three brothers have been raised as Catholics, and are now at that tricky spiritual stage where they still believe what they were taught in church, but don't always act accordingly. Because they have well-developed senses of sin, they suffer from guilt - but not enough to stop sinning. Who among us doesn't know what that feels like? Jack is happily married. Molly is the love of his life. And yet when Ann, Barry's now former girlfriend, makes a blatant play forhim, he is too weak to resist. He has an affair, if such a word can be used for a relationship that essentially makes him miserable.

Barry meanwhile crosses paths with a young actress named Audry (Maxine Bahns), and begins to like her - even love her - without feeling ready for a "commitment." Meanwhile still, young Patrick, the most religious of the three, breaks up with Susan rather than move in with her, which he thinks would be sinful. His virtue has apparently suffered some lapses, however, since Susan eventually reveals that she is pregnant and plans to have an abortion. Patrick thinks that is morally wrong, and is cornered: If he marries Susan, she'll have the baby, but Patrick now sees clearly that he doesn't love her and doesn't want to spend his life in his father's business. (An old high school friend named Leslie, played by Jennifer Jostyn, provides a convenient sounding board, and eventually more.) The brothers try to keep their affairs more or less private from one another, but eventually almost everything comes out, in a series of confrontations where they're good at telling each other what should be done, but not so good at taking advice. One of the best scenes is a conversation between Jack and Molly, in which she tells him she knows he's having an affair, and asks him to explain himself. This scene, and several others, approach the unadorned simple truth of life.

Hanging over all of their choices is a complicated childhood. In the movie's first scene, after their father's funeral, their mother announces she is returning to Ireland to be with the man she should have married. She urges them not to waste their lives on the wrong person as she did. (The father is referred to at one point as "our favorite wife-beating, child abusing alcoholic.") These brothers, having seen an unhappy marriage up close, want to make the right choices and are not always clear about how to do that.

"The Brothers McMullen" was written and directed by Edward Burns, who plays Barry. It's a Cinderella story: a film shot on weekends for $24,000 that won the 1995 Sundance festival, was picked up by Fox Searchlight and transferred to 35-mm., and launched the careers of everyone in it. Lots of young directors make independent films on weekends, but few of them show Burns' introspection and serious purpose in a film that is also, intermittently, a comedy.

The movie brings into focus how rare religion and spirituality are in American films - especially when they are viewed as part of real, flawed lives. This is not a "religious" film, and the brothers are far from saints. But they know right and wrong, and in their imperfect ways they are struggling to attain a state of grace. Sometimes they slip. Sometimes they don't struggle so hard. 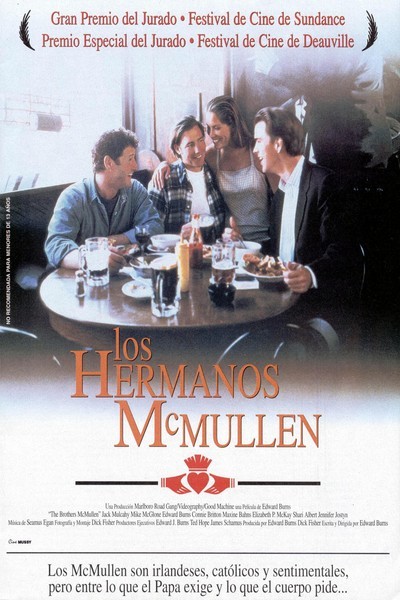