Shang-Chi and the Legend of the Ten Rings

It’s telling when the Marvel Cinematic Universe uses its immense power to operate an assembly line. But it’s just as telling when there’s a deeply human spark to one of their projects, allowing franchise values like great spectacle, striking performances, and intricate depictions of family to prevail. “Shang-Chi and the Legend of the Ten Rings” is the latest addition to the latter category, taking after previous Marvel movies that introduced a vision and became benchmarks: “Captain America: The Winter Soldier,” “Black Panther,” and “Thor: Ragnarok” come to mind. Directed by Destin Daniel Cretton, this film fits into Marvel packaging in its own way, but it has an immense soulfulness that other MCU movies, superhero movies, and action movies in general should take notes from.

Simu Liu stars as Shang-Chi, a key piece to a broken family that has a history of infighting. The dysfunctional family dynamics are even more important than the ten rings that grant such immense power to Shang Chi’s power-hungry father Wenwu, who has lived for 1,000 years and created a society called the Ten Rings that has destroyed kingdoms and swayed the events all over the world. When Wenwu found love with Jiang Li (Fala Chen), there was peace. They married and started a family. But after Shang-Chi’s mother died, a newly monstrous Wenwu tried to mature his son by making him a killer, causing the young boy to leave behind his sister Xialing (Meng'er Zhang) and Wenwu. Cretton, who previously directed “Short Term 12,” an Avengers-like showcase of indie rising talent (Brie Larson, LaKeith Stanfield, Rami Malek, etc.) keeps those visceral, personal stakes in this script (by himself, Dave Callaham, and Andrew Lanham), so that the superhero context is a bonus to the drama. The film is a mega-budget ballet, one that glides and floats over an abyss of grief.

This backstory comes for Shang-Chi, known as an American adult as Shaun, when he rides the bus with his friend Katy (Awkwafina) up and down the hills of San Francisco. A group of henchmen attack Shang-Chi for a green pendant he wears around his neck, and in a beat that’s prefaced like a power-up (to Katy's funny surprise), Shaun’s immense courage suddenly comes to light. So too do his fighting skills, which help make for an incredible melee scene of hand-to-hand combat that has the camera gazing for long shots and freely going in and out of the moving bus, just like its impromptu hero. The scene lacks for its yowch-factor—especially compared to how “Nobody” did the same thing with appropriate blood earlier this year—but it side-steps that element by being fast-paced, even longer than you think it’ll be, and very funny. It’s the birth of an action star in Liu, and an amazing debut for a character who will find himself in fight scenes here of escalating intensity.

The power for this film, however, comes through in the eyes of his father, Wenwu. One of the movie’s most brilliant choices is casting Tony Leung so that can repeat the same magic he’s had from countless romances and dramas in Hong Kong. Leung rules this movie. With the same silent passion and stillness that made “In the Mood for Love” one of the greatest romances of all time, Leung destroys armies, raises a family, and struggles to resist destructive grief; his presence is made all the more powerful by the ten blue rings that help him slingshot around and destroy whatever is in his path. When he hears the voice of what could be his wife from behind a cave of rock, Wenwu becomes a Darth Vader-like tyrant, driving a campaign to rampage through the mother’s magical home known as Ta Lo, in order to get to a cave that everyone else knows (including his son and daughter) has an apocalyptic, soul-sucking dragon inside. It’s the best performance from the Marvel Cinematic Universe, because the passion and grief it expresses is appropriately Leung-sized.

Cretton is able to take this enthralling movie from one scene to the next with this vivid sense of a brother and sister trying to stop their father from destroying everything because he can’t move on. It’s a more devastating threat than the usual world domination thing, and it parallels how the script builds out the painful backstory of Shang-Chi and his similarly skilled and aggrieved sister, Xialing. With a few strong twists along the way, “Shang-Chi and the Legend of the Ten Rings” turns into an adventure and a homecoming to a peaceful realm from a whole different time, which brings in a sweet, magnetic performance from Michelle Yeoh. These passages, as balletic as the entire movie, detail how Shang-Chi learned two different fighting approaches—life philosophies, really—from his mother and father.

It doesn't seem like a coincidence that a massive Hollywood tentpole sincerely based on character-based kung fu has inspired such rich fight scenes, and it makes the film even more of a refreshing blast. Cretton and his team constantly play with height, light, reflections, and staging when it comes to orchestrating a fight set-piece that surprises the audience (like a jaw-dropping, way-up-high nighttime battle royale on some scaffolding in Macao), and then foregrounds the choreography as the main spectacle; it’s not just about who is throwing the punches and kicks. I should admit that numerous beats in these sharply edited sequences blew me back in my chair,, an involuntary filmmaking nerd response I’ve had to similar movies that inspired this one: “Skyfall,” “The Grandmaster,” for starters.

“Shang-Chi"'s thrilling’s embrace of clarity, of nudging your imagination instead of doing all the work for you, spreads the inspired special effects that enhance the magic of this story and the world of its characters. There’s an evocative use of water—it bursts from walls, floats in the air, and makes a map of icicles—a striking way of depicting a moment that usually would just get a hologram. The movie even throws in a charming animated cute sidekick that cleverly subverts the expectations of cute faces on plush-looking sidekicks. The dominating usage of CGI—the kind that requires dark clouds, as we saw in the grand battle of “Avengers: Endgame”—is saved for the last massive sequence, which is such an over-the-top, giddy, rollercoaster ride that you can’t help but root for it.

The Avengers, the new roster at least, lurk on the periphery of “Shang-Chi and the Legend of the Ten Rings,” but Cretton’s film benefits from establishing its deeper family and friend relationships. Liu and Awkwafina have adorable, platonic chemistry as two valet workers who are thrust into another adventure, this one more intense than their karaoke nights; Awkwafina in particular becomes a vital source of levity for the script, and a welcoming audience surrogate as the film ramps up to a large battle. She helps the humor pop even more compared to the story’s darker themes, making numerous passages of the movie not only thrilling but charming and funny.

As for Shang-Chi himself, well: take away the comic relief that lovingly dunks on him, or the battling schools of fighting from his parents that swirl within him, and there’s not too much personality to the character. It’s a distinct void when one reflects on the performance, given that Liu is so watchable in how he combines a striking, bulky presence with endearing innocence, a la Channing Tatum’s own box office dominating days. It becomes telling of the imperfect balancing act of this script that its main character needs a little emphasis in his sequel; the same could be said for other intriguing characters like Xialing, a vengeful bad-ass in her own right not given enough screen time or depth, especially considering where she ends up.

Without spoiling, the movie does make some efforts to address Marvel’s previously problematic presentations of Asian characters, and while the moments are used for some self-deprecating comic relief, they remind me of two things: how it’s impossible for these Marvel films to exist in a vacuum, and how much more work needs to be done. Even the people who helped make this movie stumble through talking about it, like when Disney CEO Bob Chapek insensitively said this was an “interesting experiment,” a phrase that indicates a secondary status, something unofficial. The statement is ignorant in many ways, but especially after one witnesses the many triumphs of “Shang Chi and the Legend of the Ten Rings.” It embraces fruitful ideas, big and small, whether in cohesive action scenes, embracing platonic friendships in a mega-budget movie, or introducing a new exciting hero who also has to instruct his friend (and the audience) on how to properly say his name. This movie is not an experiment for Marvel and Disney. It is a promising template for how they can get it right again.

Exclusively in theaters on September 3rd. 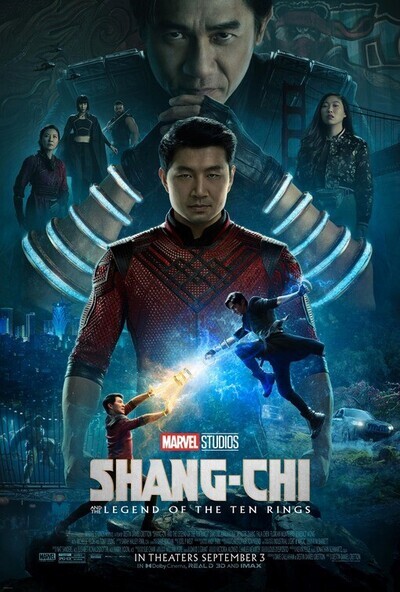 Rated PG-13 for sequences of violence and action, and language.