Bob Odenkirk takes an unexpected turn in Ilya Naishuller’s “Nobody,” a clever action flick that repositions the star of “Better Call Saul” as someone closer to Liam Neeson’s action heroes. While imagining one of the brilliant minds behind “Mr. Show” as an action hero may seem like a stretch, it turns out to be a stroke of genius as Odenkirk grounds his violent protagonist with a very special set of skills in a way that other actors would have missed. He’s great as a man who has tried to leave a violent past behind, but movies have taught us for generations that that’s easier said than done.

“Nobody” opens with a montage of the mundanity of Hutch Mansell’s daily existence. Every day, he scans the same transit card; every week, he misses the trash man by mere seconds. Life is a series of routines, which has eaten away at his marriage to Becca (Connie Nielsen) while providing a relatively happy home for his kids, Blake (Gage Munroe) and Abby (Paisley Cadorath). Hutch works at a manufacturing company owned by his father-in-law Eddie (Michael Ironside) and dominated by his alpha brother-in-law Charlie (Billy MacLellan). Luckily, writer Derek Kolstad doesn’t waste too much time on Hutch’s normie suburban existence, thrusting viewers into the action of “Nobody” almost immediately.

It starts with a home invasion, in which two bottom-level criminals rob the Mansells of some spending money and a few trinkets. Hutch has the drop on one of them, golf club raised in the air, but he doesn’t take the chance at elevating the violence, much to the disappointment of his son and disdain of his dude-bro male neighbor. When it looks like the invaders may have taken poor Abby’s kitty-kat bracelet, Hutch snaps, tracking them down to retrieve it.

However, “Nobody” is not really a “Death Wish”-esque story of an average guy turned vigilante. There are hints very early on that Hutch isn’t just a normal suburbanite. Even his man cave seems laid out to hint at a different background than your neighbor, including a radio through which he speaks to his brother Harry (RZA), who is in hiding. Why? And what’s up with the box of fake IDs and money that Hutch's father David (Christopher Lloyd) has been storing away? When the bracelet retrieval job goes a little sideways, Hutch is on a bus heading home when he encounters a group of obnoxious drunks harassing a woman who’s on her own. He takes it upon himself to protect her and essentially starts a violent war with a Russian crime lord named Yulian (Aleksey Serebryakov).

The bus scene that initiates the real action of “Nobody” is the kind of action choreography work of art that will have devoted audiences applauding at screenings for years to come. It’s a clever piece of filmmaking that starts with Hutch throwing himself into a few awkward exchanges with his new enemies and continues to elevate, almost as if this encounter is awakening his skill set one punch at a time. Choreographed by the team behind “John Wick,” it’s the type of action scene that people will be mentioning with a smile for a long time, and a reminder of the adrenalin that a film can get from a creatively crafted action scene.

Other than a scene that sets up Yulian as a psychopathic villain that runs a bit too long, Naishuller is smart enough to use the momentum from the bus scene to push through the rest of the story. “Nobody” is an incredibly quick film, an experience that feels nowhere near as long as its 92-minute runtime. One could argue that the movie could have used a bit more prologue that would make Becca and their children into characters instead of functions for the plot, but there’s a tightness to “Nobody” that’s often lacking in modern films, one that’s reminiscent of the economy of the “John Wick” flicks, which is one of that trilogy’s greatest strengths.

Then there’s Odenkirk. Watching “Nobody” a second time made it easier to appreciate how much he brings to a role that someone could have easily sleepwalked through for a paycheck (this would be a much lesser movie with the current king of the Paycheck Performance, Bruce Willis, for example). Odenkirk deftly sells both halves of Hutch, making both his current family life and his violent past believable. It’s a smart performance, which should come as no surprise to fans of his work on “Breaking Bad” and “Saul,” but it’s also a wonderfully physical one in that he makes the stunt work and fight choreography genuine. The supporting cast is strong—particularly RZA and Lloyd, both of whom know exactly what to bring to this project—but it’s Odenkirk’s film through and through, and he nails it.

Unsurprisingly from the director of the insanity that is “Hardcore Henry,” Naishuller has a habit of overplaying his stylistic hand every now and then with slo-mo montages set to unusual music choices. And there’s a version of the film that feels like it has higher stakes—no one ever really feels in jeopardy here (at least “John Wick” had the dog). But Naishuller ultimately gets what matters here right, giving a talented actor an unexpected vehicle to drive really fast with just enough bloodshed for action fans, and not too much gore for average audiences. It’s the rare modern action film that makes me hope it does well enough to produce a sequel. (I also think there’s potential for a crossover “John Wick vs. Nobody” project that would make roughly a gajillion dollars worldwide.)

“Nobody” works because it values scene construction and action choreography above all else, leaving behind pretension and the overplotting that's been common in the genre in recent years. It doesn’t break any molds so much as present a really good time within a familiar structure. After a year with too few action movies because of the shelving of the blockbuster, “Nobody” gives viewers an adrenalin rush that almost feels new again.

Only in theaters tomorrow, March 26th.

The Scary of Sixty-First 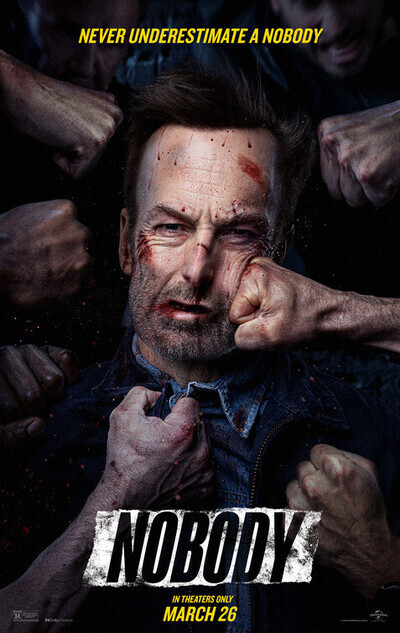 Rated R for strong violence and bloody images, language throughout and brief drug use.