Sequin in a Blue Room

To describe the new Australian import “Sequin in a Blue Room” as a queer coming-of-age story is technically accurate, I suppose, but it hardly begins to suggest what lies in store for viewers. Instead of the earnest drama or awkward comedy one might expect from such a description, "Sequin in a Blue Room" that plays like the next step after one of those films—one that starts off with the main character fairly certain and comfortable in who they are—and then fuses it to a nervy and edgy erotic thriller. The combination of such unlikely elements may not add up to a fully satisfying whole in the end but when it does work, which is quite often, it moves with a confidence and style that keeps you hooked throughout, even during the scenes when you might ordinarily be cringing for any number of reasons.

Our hero is Sequin (Conor Leach), a 16-year-old who is comfortably out and embracing and exploring his sexuality in a manner that might make most sensible people cringe. He spends most of his time on an app that allows him to arrange anonymous sexual encounters with strangers. (His name comes from the sequined shirt that he wears to all such meetings.) Preferring the no-strings approach, Sequin’s modus operandi is to have that single encounter and move on—as soon as he leaves afterwards, he is already blocking that person on the app and outside of the occasional furtive memory while showering later at the home that he shares with his loving and accepting father (Jeremy Lindsay Taylor), he doesn’t spare them another thought. This may sound extraordinarily foolhardy and dangerous to most right-minded people, but when you consider both Sequin’s comfort with his sexuality and the natural inclination for teenagers to do potentially harmful things to themselves under the belief that youth=indestructibility, the mindset may be slightly more understandable.

Before long, two events occur that throw Sequin’s hedonistic and deliberately solitary existence into turmoil. The first comes when he has an encounter with B (Ed Wightman), a middle-aged married man who becomes instantly fixated on Sequin and wants to see him again. This becomes especially awkward one night when Sequin is invited to The Blue Room, an elaborate group sex party, and is spotted by B, who begins pursuing him through halls where couples are going at it behind walls of translucent blue sheeting. Sequin is rescued at the last second by another participant (Samuel Barrie) and after their inevitable tryst, his rescuer tells him to “find me out there” before slipping away. Sequin is instantly besotted, of course, but has no idea of who this person is or how to find them and his fixation leads him to a series of very bad decisions.

The opening credits for “Sequin in a Blue Room” describe it as “A Homosexual Film By Samuel Van Grinsven,” a clear homage to pioneering gay filmmaker Gregg Araki, who used to introduce movies like “The Living End” and “The Doom Generation” in a similar manner. While Araki was presumably an influence on Van Grinsven, who also co-wrote the screenplay, this film is far more ambitious in terms of story and tone than Araki’s transgressive (and sometimes tedious) efforts. This film moves from lighter elements, such as his attempts to deal with the deeply awkward flirtations of a classmate whose boldest moves are to invite him to a movie and to mention “Brokeback Mountain” in their English class, to the darker material involving the various forms of erotic obsession on display (with the Blue Room sequence coming across like the missing link between “Eyes Wide Shut” and “Mulholland Drive”) and manages to pull both off quite well. The deft juggling of the disparate tones—which at times put me more in the mind of the great François Ozon rather than Araki—is even more impressive when you consider that not only is this Van Grinsen’s directorial debut, it actually began as his graduate project.

“Sequin in a Blue Room” has a couple of awkward moments here and there. There are a couple of classroom discussions about familiar narrative tropes in romantic fiction that are just a little too on-the-nose to work and the final moments do not quite land with the impact that Van Grinsven was clearly hoping to pull off. However, those are the kind of rookie mistakes that even a good filmmaker sometimes makes the first time around and his accomplishments—which also include getting an impressive performance from Leach, who makes Sequin fascinating to watch even in his most self-absorbed and self-destructive moments—definitely mark his as someone to keep an eye out for in the future. I admit that between the basic plot description and a title that sounds more like the description of an especially enigmatic clue on “Twin Peaks,” “Sequin in a Blue Room” may prove to be a hard sell for many. However, those who are willing to give it a chance—and that would include thoughtful teenagers who would respond to a film that approaches their lives in a serious and reasonably non-judgmental manner—are likely to find it as fascinating as I did. 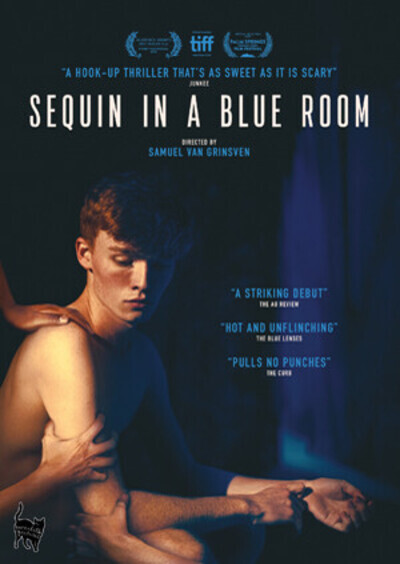 Ed Wightman as B