Words like "disaffected," "distanced" and "deadpan" flew from my mind onto my note pad while I was watching "The Doom Generation." This is the kind of movie where the filmmaker hopes to shock you with sickening carnage and violent amorality, while at the same time holding himself carefully aloof from it with his style.

He would be more honest and probably make a better movie if he got down in the trenches with the rest of us.

There is an attitude in Gregg Araki's film that I've sensed in a lot of work recently: The desire by the filmmaker to have his cake and eat it, too. He wants to make a blood-soaked, disgusting, disturbing movie about characters of low intelligence and little personal worth, but he's not willing to cop to that, and so by giving them smarmy pop-culture references and nihilistic dialogue, and filling the edges of his frame with satirical in-jokes and celebrity walk-ons (Margaret Cho, Heidi Fleiss), he's keeping himself at arm's length. Hey, if we're dumb enough to be offended by his sleazefest, that's our problem; Araki is, you see, a stylist, who can use concepts like iconography and irony to weasel away from his material.

Note carefully that I do not object to the content of his movie, but to the attitude. Content is neutral until shaped by approach and style. This is a road picture about Amy and Jordan, young druggies who get involved with a drifter named Xavier who challenges their ideas about sex, both gay and straight, while involving them on a blood-soaked cross-country odyssey. The movie opens as the drifter "inadvertently" (Araki's word, in the press kit) blows off the head of a Korean convenience store owner. The head lands in the hot dog relish and keeps right on screaming. Ho, ho.

It continues as the "enigmatic Xavier" (I am again quoting from the wonderfully revealing press kit) "has such rotten karma that every time they stop the car for fries and Diet Cokes, someone ends up dying in one gruesome way or another." Wait, there's more: "As the youthful band of outsiders continues their travels through the wasteland of America, Amy finds herself (having sex with) both Jordan and Xavier, forging a triangle of love, sex and desperation too pure for this world." Now let's deconstruct that. (1) The correct word is "its," not "their." (2) "Band of outsiders" is an insider reference to "A Band Apart," the name of Quentin Tarantino's production company, which itself is a pun on the title of a film by Godard. (3) Is it remotely possible that America is a "wasteland" because Amy, Jordan and Xavier kill someone every time they stop for fries and a soda? That wouldn't have occurred to this movie. (4) The clause "someone ends up dying" is a passive way to avoid saying that the three characters kill them. This is precisely the same construction used by many serial killers and heads of state, who use language to separate themselves from the consequences of their actions.

Araki may not have been thinking of Leopold and Loeb when he made his movie, but I was when I watched it.

Two of the best movies I've seen in recent years covered material similar to "The Doom Generation." They were "Kalifornia" and "Natural Born Killers." Both were about cross-country odysseys involving young lover; killers. Both dealt thoughtfully with their characters, and the consequences of their actions. Both had a point of view, and a moral position. "Bonnie and Clyde" (1967), Terence Malick's "Badlands" (1974) and both versions of "Gun Crazy" also had doomed young lovers on the run. All of these films were honest enough to be about what they were about - to acknowledge their subject matter.

But Gregg Araki has maybe seen too many movies, and is eager to have us know that he is above his subject matter. He's like the sideshow impresario whose taste is too good to enter his own tent.

For him, I recommend several viewings of "Henry: Portrait of a Serial Killer," a brilliant film that deals with a character very much like Xavier, and is not too shy to deal with him - to see him as he is, and accept the consequences.

Was I unfair to quote so liberally from the press kit? I used it because it praises the film so openly in terms that reveal its underlying dishonesty. Directors may not write their press kits, but they are responsible for them. Further reading from the kit: "The Doom Generation"' is the Alienated Teen Pic to End All Alienated Teen Pics - and, oh yeah, it's a comedy and a love story, too." Oh, yeah. 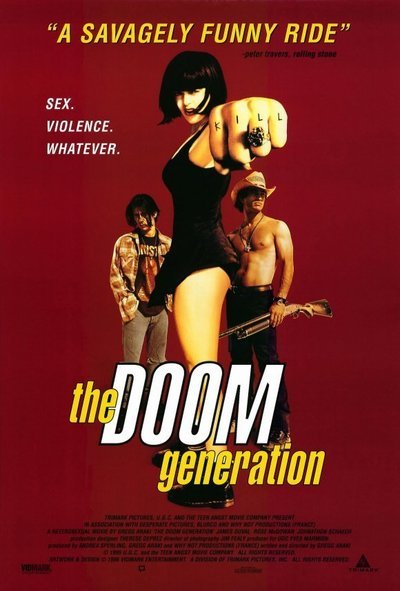