"Ron’s Gone Wrong” is an indictment of the invasive, insidious tactics of Big Tech, and of the ways we relinquish a little more of our privacy with every click and view. It shines a light on the superficial nature of social media and how it amplifies bullying and insecurities, especially among the young people for whom it serves as a lifeline.

“Ron’s Gone Wrong” is also a celebration of the positive power of technology, of its ability to connect us with others who share common interests and to teach and transport us with the touch of a few keystrokes. And, fundamentally, it’s a lively and sometimes hilarious animated adventure and a sweet story of friendship.

This is a movie that wants to have its cake and eat it too—with a side of cookies.

Directors Sarah Smith and Jean-Philippe Vine and co-director Octavio E. Rodriguez, working from a script by Smith and Peter Baynham, don’t tell us anything we haven’t already heard and don’t already know. Electronic devices are bad. We are addicted to them at the expense of genuine human interaction. And the platforms that were designed to unite us actually have driven us further apart. Additionally, “Ron’s Gone Wrong” borrows from myriad other movies in telling the story of a lonely boy and his adorable but imperfect droid pal, from “E.T.: The Extra-Terrestrial” and “Big Hero 6” to “Her” and even that forgotten ‘80s comedy “Electric Dreams.”

But gosh darn it if the character design on the B-Bot, “Your best friend out of the box,” isn’t irresistible with its smiley face and soft-edged simplicity. As voiced by Zach Galifianakis, he’s just so perky and well-intentioned despite his brutal literalism and awkward turns of phrase, you can’t help but like him. And yet, if you stop and think about it, the mixed messaging on display here is problematic and inescapable.

Jack Dylan Grazer (“It,” “Shazam!”) provides the voice of Barney, a misfit middle schooler who dreads the isolation of recess. When the Apple-esque mega tech manufacturer Bubble comes out with a shiny new device that follows you wherever you go, knows everything you like, and connects you with others through your apps, every kid in school gets one but him. You can even switch up their colorful skins, from bunny rabbits to Mexican wrestlers, in a nod to interactive games like Roblox. As a belated birthday present, his nerdy widower dad (Ed Helms) and old-country Bulgarian grandmother (Olivia Colman, doing unrecognizable voice work) devise a way to snag one for him—trouble is, it fell off the back of a truck, so it’s a teensy bit defective.

Still, the minimalist Ron (as Barney names him) is eager to please, and the sequences in which he and Barney attempt to bond despite his technical malfunctions are the movie’s strongest. One charming segment finds Ron rolling out in the world to share photographs with strangers and hand out friend requests made with construction paper and crayon. The pacing is really spry here and the wordplay is consistently clever. But when Ron goes haywire on the playground in a moment that goes viral, the B-Bot’s idealistic, hoodie-wearing inventor (Justice Smith) and Bubble’s soulless, profit-obsessed CEO (Rob Delaney) struggle to contain the fallout with minimal damage—albeit for different reasons. Their conflicting intentions parallel the film’s efforts to operate on two contradictory levels at once: They simply cannot work together.

Young viewers will probably see a lot of themselves in these characters, though, whether they’re loners like Barney or secretly sad popular girls like Savannah (Kylie Cantrall), who’s constantly feeding the beast of social media to boost her self-esteem. There’s a better movie that takes on that topic, too: Bo Burnham’s “Eighth Grade.” But for tweens and kids a little younger, this less-sophisticated model should work just fine. 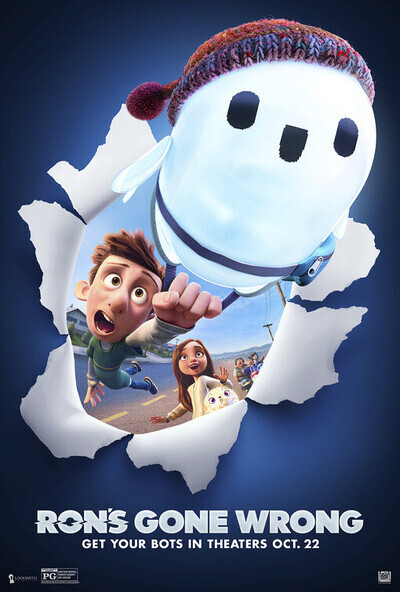