Clowns are creepy no matter what. We can all agree on that, right?

But Pennywise, the dancing clown who tracks down and torments the children of small-town Maine in “It,” is deeply unsettling. At least, he is in the latest incarnation of Stephen King’s iconic novel. Infamously, Tim Curry’s take on the character in the 1990 TV miniseries version was so over-the-top, it was laughable—not that you’re looking for understatement in your homicidal clowns.

But what Bill Skarsgard does with the role works well precisely because he doesn’t appear to be laboring so hard to frighten us. He doesn’t vamp it up. He’s coy—he toys with these kids—making his sudden bursts of insane clown hostility that much more shocking.

Even more effective than the horror elements of Argentine director Andy Muschietti’s adaptation is the unexpected humor he reveals in the story—and, ultimately, the humanity. Finding that combination of tones is such a tricky balance to pull off: the brief lightening of a tense moment with a quick quip, or an earnest monologue in the face of extreme danger. But “It” makes that work nearly every time, thanks to its perfectly calibrated performances from a well-chosen cast.

The kid-bonding parts of the movie are actually stronger than the creepy-clown parts, even though images of that freakish, frilly fiend will be the ones that keep you awake at night. Led by “Midnight Special” star Jaeden Lieberher—whose everyman (everykid?) appeal grows with each film—and including a star-making performance from Sophia Lillis as the crew’s lone female member, it’s mostly unknown actors who comprise the film’s so-called “Losers Club.” But their characters are distinctly drawn, each with a fleshed-out backstory that explains why their fears make them so vulnerable to Pennywise’s attacks.

Unlike King’s novel and the 1990 original “It,” the screenplay from Chase Palmer, Cary Fukunaga (the acclaimed writer-director of “Sin Nombre” and “Beasts of No Nation”) and Gary Dauberman doesn’t jump back and forth in time. It moves the time frame to 1988-89 and sticks with our core group of seven kids while they’re still adolescent misfits, which grounds their story and makes it more immersive. (It also surely will draw comparisons to the Netflix series “Stranger Things,” another supernatural mystery set in small-town America in the 1980s. The nostalgia factor is strong for those of us who grew up then, too.)

Muschietti’s version begins as the book does, though, with innocent, six-year-old Georgie Denbrough (Jackson Robert Scott) chasing his toy boat as it sails down a gutter and into a storm drain on a rainy afternoon in fictional Derry, Maine. He’s especially fond of the boat because it was a gift from his beloved older brother, Lieberher’s Bill, a smart, skinny kid who struggles with a stutter. That’s why his choice to chat with Pennywise—who just happens to pop up in the sewer with the boat and a smile—leads to his tragic demise. (Muschietti’s cutaways to a cat who witnesses everything from a nearby porch are chilling; he showed that same delicate mastery of mood with his underappreciated 2013 horror film “Mama,” starring Jessica Chastain.)

But Bill insists Georgie has just gone missing, as such an unusually large number of Derry children have over the years. He enlists his posse of similarly bullied, outcast pals to help him get to the bottom of this lingering mystery: wisecracking trash-talker Richie (Finn Wolfhard, who also happens to be in “Stranger Things”); wimpy mama’s boy Eddie (Jack Dylan Grazer); nervous rabbi’s son Stanley (Wyatt Oleff); heavyset new kid Ben (Jeremy Ray Taylor); and the tough-but-kind Beverly (Lillis). Eventually, the home-schooled farmhand Mike (Chosen Jacobs), who’s suffered racial attacks as the only black kid in town, makes them a team of seven.

Despite the many terrifying moments they endure in their quest—scenes that will leave you trembling and giggling at once—“It” is even more powerful in the warm, easy camaraderie between its young stars. Certainly you could view it as a straight-up horror flick, but the underlying allegory of these characters facing their deepest fears as they enter adulthood gives the movie more emotional heft—a bit of bittersweet within the suffering.

These kids have all languished on the fringes—hence the “Losers Club” tag they wear as a badge of honor—whether it’s because of an overbearing mother, an abusive father or a devastating family loss. But they’re also all on the cusp of something. Pennywise knows what frightens them in this precarious state of flux and tries to use that devious, supernatural ability to lead kids to their doom. Confronting those fears rather than running away is what just might save them.

Tonally, “It” feels like a throwback to great King adaptations of yore—particularly “Stand By Me,” with its ragtag band of kids on a morbid adventure, affecting bravado and affectionately hassling each other to mask their true jitters. Wolfhard in particular has great comic timing as the profane Richie. Technically, Muschietti shows some glimmers of early Spielberg, too—the low camera angles, the images of kids on bikes pedaling furiously in a pack, the overall mix of wonder and danger.

“It” could have used a bit of tightening as it builds toward its climax, though. While the imagery is undeniably harrowing and even poignant in the action-packed third act, some of it feels dragged out and redundant. And because the final confrontation takes place within a dark, underground lair, it’s sometimes difficult to tell exactly what’s going on, despite the impressive visual effects on display as Pennywise unleashes his full powers on his young attackers. (That’s one of many ways in which the new “It” is a vast improvement over its low-tech predecessor.)

Not to burst your balloon, though, but the closing credits suggest this may not be the last we’ve seen of Pennywise after all. 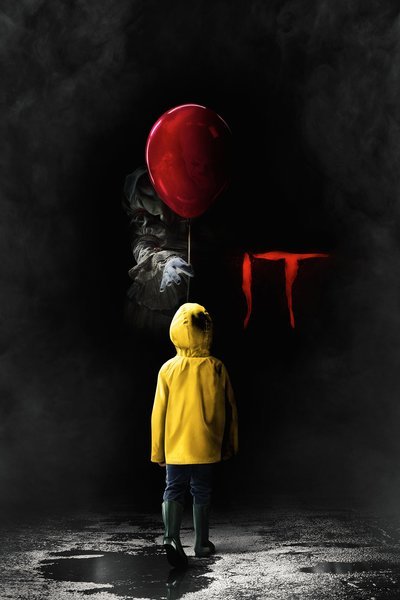 Rated R for violence/horror, bloody images, and for language.

Javier Botet as The Leper