13-year-old Kayla (Elsie Fisher) hosts a Youtube series called "Kayla's Korner" where she gives advice to an imagined audience of her peers. She picks topics like "Being Yourself" and "Putting Yourself Out There" and stumbles her way through a pep-talk peppered with "like" and glances at her notes. A glimpse of the subscriber count shows that Kayla's Korner hasn't exactly taken off. "Eighth Grade," the extraordinarily assured feature film debut by writer-director and standup comedian Bo Burnham, starts out with one of these videos and it is so touchingly real, so embarrassingly true to life, you might swear it was improvised, or found footage. But it's not. This is Elsie Fisher, a 13-year-old actress herself, amazingly in touch with what it's like to be in the stage of life she's actually in. Kayla airbrushes out her acne, and swoops on heavy eyeliner. When you see what her life is actually like the Kayla's Korner videos take on an almost tragic significance. But it's strangely hopeful too. This is a young girl trying to understand what she is going through, and she does so by positioning herself as an expert and a helper to others.

Kayla lives at home with her dad (Josh Hamilton). There's no mother in the picture (why isn't explained until near the end). Her dad struggles to keep a connection with his adolescent daughter, who seems hell bent on shutting him out. The dad's attempts at conversation ("Are you excited about high school?" "You're such a cool kid, those videos you do? They're amazing.") mortify her. Kayla doesn't have any friends, and harbors a gigantic crush on the sleepy-eyed uber-confident Aiden (Luke Prael), swooning whenever she looks at him. She also stares longingly at Kennedy, the Queen Bee of middle school (Catherine Oliviere).

Bo Burnham knows that of all the terrors in this world, there is nothing quite as terrifying as being a shy 8th grader, attending a birthday party for the most popular kid in school. Filmed like a moment from "Amityville Horror," Kayla stands at the sliding glass doors in her lime-green one-piece bathing suit, shoulders hunched, arms dangling down, staring out at the playful shenanigans of her classmates, all of whom display the social ease utterly unattainable to an outsider like Kayla. Burnham pulls the camera back slowly, as the electronic music (composed by Anna Meredith) blots out all other sound, with Kayla hovering in the background, a ghostly figure seen through glass. "Eighth Grade" is full of stylistic flourishes like this. A flourish can be empty, a flourish can keep the audience comfortably "above" the action onscreen. But Burnham knows what he's doing. Every moment is life-or-death when you're 13. These flourishes identify us so strongly with Kayla that every social scenario is pierced with emotional peril.

There's all kinds of sublimated "commentary" in "Eighth Grade" about what it's like to be a teenager today: constant internet use, scrolling through the carefully curated Instagram feeds of classmates, the societal pressure to seem "okay" and "fabulous" all the time. When a teenager feels pressure to "perform" her life on Instagram or Snapchat, it changes the game in subtle ways that probably aren't even understood yet. But Burnham keeps the touch light and humorous. He doesn't lecture from a podium. There's an overhead shot of a school assembly, showing hundreds of kids sitting there clutching their phones in their hands. In a chilling sequence, the kids are put through a lockdown drill, where they have to hide under the desks from a hypothetical shooter. They all crouch there, waiting for it to be over, faces lit up by the glow of their phones. But Burnham stays down on the ground with the kids, he's in the thick of it. If social media can keep us disconnected from one another, it can also connect us. After a day "shadowing" a kindly high-school student named Olivia (Emily Robinson), Kayla gets up the courage to call Olivia and thank her, and Olivia is thrilled in her new role as mentor and friend. She even invites Kayla to come hang out at the mall.

Darker moments threaten. An encounter with an older boy, who tries to force her to play Truth or Dare in the back of his car, highlights just how terrifyingly young she is. She has insanely passionate feelings for Aiden, but all the other stuff—wanting to do anything about those feelings—are not there for her yet. Her father trails along behind her, trying to give her space, but also worried about what might be going on. His concern makes him "hover," and Kayla is desperate to get away from him, but in a late scene, when she asks him if it makes him "sad" to have her as a daughter—his shock that she would feel that way about herself is heartbreaking.

"Eighth Grade" is so grounded in the reality of middle school it almost operates like a horrible collective flashback. All of the kids in the cast are real middle-schoolers, not 20-somethings playing at adolescence. There's a vast difference between a 16-year-old and a 13-year-old, but this has—typically—been difficult for films to acknowledge or portray. The struggles of teenagers are woven into our cinematic history. But middle school kids? It's harder. 8th graders still have one foot in the sandbox. They are still children, but with bodies exploding into young adulthood, creating a miasma of self-loathing, hormonal surges, irritability ... When the parade of middle schoolers walk in single file into the high school for "shadow" day, the high school kids lining the hallways look like adults in comparison.

Burnham knows how middle-schoolers really talk. They stumble, they repeat themselves, they try to sound older, but can't help reverting. They don't have a handle on social language yet. "I like your shirt ... I have a shirt too," Kayla says to Kennedy, who stares at Kayla with such dead eyes you can tell she can't wait to look at her phone again. When the Truth or Dare boy says something suggestive, the anxious confused Kayla murmurs to herself, "Okay," but what comes out is, "O-kee..." Fisher's actual age is one of the reasons "Eighth Grade" has such a sense of verisimilitude. Her smile is so rare that when it comes it almost cracks her face, but the joy is so enormous is threatens to push her into a panic attack. She is in the stage of becoming herself. Her dad's loving anxiety is the audience's. But "Eighth Grade", with all its emotional intensity, is not about "what happens." It's about what it feels like to be thirteen. Middle school sucks. Everybody knows that. It's a stage you have to go through. But while you're there, it feels like it goes on forever. Try telling a 13-year-old "This too shall pass."

Bo Burnham, who got his start as a teenager making Youtube videos of his comedy routines, is only 27 years old. He respects where Kayla is at. He doesn't condescend to her, or to anyone else. "Eighth Grade" is an act of nervy humorous empathy. 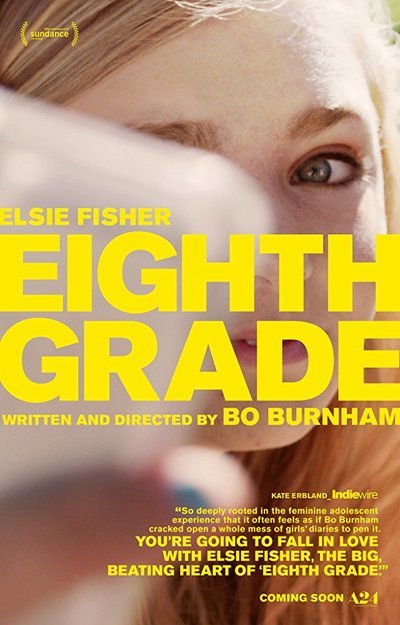