Hillary Bachelder’s feature documentary debut “Represent” opens with a parade of broadcasters and pundits with ready-made labels for women running for office, each excited to deem any given election cycle over several decades the “year of the woman.” We’re still a ways from reaching anything resembling representative parity for either gender or race in government, but it’s tough to watch Bachelder’s documentary as it follows the campaigns of three women in the Midwest without feeling hopeful. However slowly, it seems that in some parts of the country, things are changing and history is being made as we watch.

In Detroit, Michigan, recent college graduate and campus activist Myya Jones launches her bid to become the next Democratic mayoral candidate. She chooses young Black women to be her core campaign staff, and they help her knock on doors and spread awareness of her ambitious intentions. Although met with many setbacks, Jones remains undeterred in her fight to improve her city. In Evanston, Illinois, former healthcare worker Julie Cho faces challenges of a different kind running as a Republican congressional candidate in a mostly Democratic district. However, she’s stumping against the gerrymandering in her area that has led to the dilution of votes from Black, Latino and Asian American communities and finding allies who agree with her on that issue. She finds opposition not just from her well-established opponent but in her own party who do not support her cause. Out in Granville, Ohio, a farmer continuing in the family business, Bryn Bird, decides to run as a Democratic candidate for Township Trustee. As she juggles caring for her young family and her ailing mother, Bird squares off with the hard-lined established Republican men who believe women shouldn’t be in politics.

Each woman has their own story, their own struggle, and their own reasons for running. Jones wants to see the resurgence of downtown Detroit make its way to neighborhoods like hers, but first, she will have to convince skeptical (mostly male) voters who doubt her because of her age. Cho walks a fine line when listening to Democratic voters who want nothing to do with her party and Republican voters who still refer to her using an outdated slur. Bird takes her two daughters wherever she campaigns and tells one of them on voting day, “I’m doing this for you.” One of the local women who have rallied around Bird to write letters and hand out flyers tells the camera, “It feels like we’re starting a movement.” In a way, she’s right. In each story, there’s a candidate trying to get others involved in local politics, some for the first time. Of course, not every campaign is met with success, but that’s part of the process as well.

In spirit, “Represent” feels a lot like Rachel Lears’ crowd-pleasing “Knock Down the House,” which also follows a group of first-time Congressional candidates including now representative Alexandria Ocasio-Cortez and 2020 Democratic candidates Cori Bush and Paula Jean Swearengin, both of whom recently won their state primaries. But there’s a difference in the focus of each documentary. While “Knock Down the House” followed the “Blue Wave” of progressive candidates running across the country, “Represent” hones in on the Midwest, choosing instead to profile women on both sides of the ideological spectrum running at different levels of politics. For instance, the documentary carefully explores Cho’s stand against big government and how Korean history and her immigration to the United States informed her politics today. The movie also connects how Jones’ organizing on campus transferred into rallying volunteers for her campaign, and how Bird’s foray into D.C. politics inspired her to bring those lessons back to her hometown. It’s a nuance rarely seen on shows or movies about politics, which like polling, often flattens together large demographics despite complicated differences between individuals in those communities.

Heading into the homestretch of this year’s election, “Represent” feels like a balm. A reminder that, win or lose, there’s something to be gained by reigniting people’s interest in civil engagement, especially at the local and state level. You don’t have to agree with everyone’s politics in the documentary, but it’s nonetheless fascinating to hear each story and feel reinvigorated and moved by their determination. “Represent” presents a clear-eyed view of American politics on an individual level, a portrait of what drives a number of political hopefuls from historically underrepresented groups to step up on behalf of their communities. 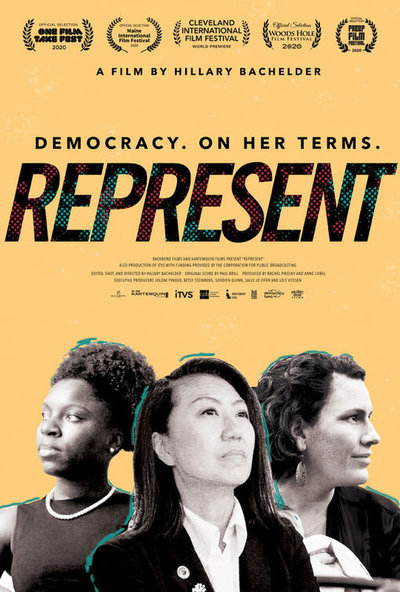 Bryn Bird as Self

Julie Cho as Self

Myya Jones as Self