Knock Down the House

“Knock Down the House” is proof that modern grassroots movements have an impact, whether an election is won or not. Just look at rising politicians Alexandria Ocasio-Cortez, Cori Bush, Paula Jean Swearengin, or Amy Vilela in the 2018 primary elections—they're filled with a spirit to defeat incumbent politicians, and while some do not win, they exemplify a dedication that only spreads with each new campaign. This here, right now, is an unstoppable movement, and this scattered yet succinct documentary bottles up its All-American can-do spirit. Propagated by Netflix today, Lears’ stirring document is a worthwhile reminder for American citizens of the importance of making one’s voice heard.

The women here are fighting to represent different parts of the country—Ocasio-Cortez for Queens, Bush for Missouri, Swearingen for West Virginia, Vilela for Nevada—but they share many of the same qualities. They’re not just Democratic women, who all speak openly with self-awareness of how they are expected to talk, and to look. They're also beautifully anti-establishment, bolstered by grassroots groups like Brand New Congress that choose candidates they want to unseat those who aren’t doing their job in Washington, D.C. As it is, these women are often competing with incumbents who have a sense of entitlement to the positions they’ve long held. In the case of Ocasio-Cortez, her competitor Joe Crowley had been unchallenged for 14 years before she came along. The first time he has a debate with her, he sends someone else in his place. In one of the doc's best moments, Ocasio-Cortez wins the farce and shows respect for the poor woman meant to represent Crowley, all while having the presence of Bruce Springsteen playing a dive bar.

Lears and her filmmaking team are like flies on the walls of the spaces in which campaigns gain momentum—it’s not so much big rallies but intimate conversations with constituents, in-person or over the phone. It's the crowded makeshift conference rooms and cramped apartments where strategies are created, ideologies are refined, where self-proclaimed “everyday Americans” can ignite something much bigger than themselves. As the film goes between different campaigns, showing how grounded their efforts are, these women put an exhilarating, multifaceted face to optimism that big change can happen.

In a way that awkwardly threatens to put the other women in her shadow, “Knock Down the House” is Ocasio-Cortez’s show. If you’re most curious about an origin story for one of the most popular politicians in 2019, you’ll get a strong arc; the other candidates, referred back to every now and then, aren’t as fortified despite learning what systemic frustrations motivate them. You're left wondering if the filmmakers were stuck with not having enough footage to make an all-Ocasio-Cortez doc, or are just following who the viewers might most recognize.

Nonetheless, the Queens candidate is a magnetic film subject. She's no BS from the beginning, presented as a working-class American lugging an ice bucket through a grimy basement, her dreams set on unseating a politician who doesn't even live in the Bronx. In moments when she is and isn't campaigning, she naturally gives the air of a political prodigy. And when Crowley does debate her later in the film, Ocasio-Cortez evades his traps and then cuts him down like a samurai. For a person of the people who is clearly equally sharp and compassionate, her story is all the more exhilarating when she's rendered speechless among a loud bar of supporters, watching her election results.

But even if the movie can hit hard with its moments of pure triumph and defeat, the doc has a matter-of-fact nature that limits its depth. Lears takes the flatter path of mostly trying to sell these women, despite their dynamic nature. Especially as the pacing starts to suffer as we follow candidates up to election day, it all jeopardizes making the doc feel preachy when its attitudes toward caring about a cause are bipartisan.

And yet the movie has noble journalistic values—you’ll be grateful that Lears and her crew are at Vilela’s headquarters to hear her volunteers talk about her election results, and you’re just as excited when the film captures Swearengin as she stands tall out in the woods with a microphone in hand, speaking to tens of West Virginians as if addressing thousands. “Knock Down the House” prevails with albeit straight-forward intentions: to amplify the women who are both mad as hell and doing something about it. 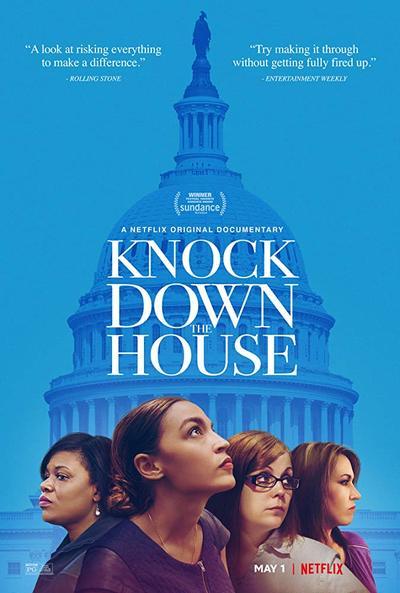 Alexandria Ocasio-Cortez as Herself