Jack (Peter Vack) lives in a small New York apartment, and spends the majority of his days online, either playing blackjack (how he makes his money) or "hooking up" with cam girls. Sometimes he ventures outside, mainly to visit ATMs to take out cash just earned from blackjack earnings. Occasionally he splurges on a "happy ending" massage, usually advertised as a "beauty spa" or a "foot massage" (New Yorkers will be familiar). Wash, rinse, repeat. The landlord wants him out, and begins renovations of Jack's apartment for new tenants, while Jack still lives there. Jack is young and handsome, but completely unfit for real-world interactions. His favorite cam girl is a dominatrix named "Scarlet" (Julia Fox). Jack's growing obsession with her is the basis of "PVT Chat," a strangely anemic film. There are flashes of interest, and even some welcome screwball elements, but "PVT Chat" doesn't coalesce in a meaningful way.

Written and directed by Ben Hozie, who also shot and edited the film, "PVT Chat" takes place over the course of a couple of weeks (or days, it's not clear), when Jack's life falls apart financially. Scarlet tells him she lives in San Francisco, but one rainy night he sees her in a bodega near his building, and stalks her through the streets. Even though he's told her he is a tech bro, with people investing in his new app that will "digitize thought," he feels betrayed that she would lie to him. When he confronts her, Scarlet suddenly vanishes (from the internet, at any rate). Scarlet takes him at his word, although one glimpse of his ratty apartment should be a "tell" that this guy is not some tech giant.

The first half of the film is told from Jack's claustrophobic depressing point of view. He masturbates to Scarlet's dominant commands, but his sexual energy is only apparent when he plays blackjack. It turns him on like nothing else. Two low-life guys come into Jack's orbit—played by Kevin Moccia and Safdie regular Buddy Duress—and it's apparent they're up to no good. Jack plays the Big Shot with them, high on his own fumes. His fantasy with Scarlet is not sexual, not really. He wants to connect, he wants her to open up, tell him about herself. She does, showing him her paintings. He raves about them, over-praising them ("I love the way you use the yellow!" he gasps), and it feels more like first-date behavior than the third act of a transactional sexual relationship. Does Jack have that earnest "I love the way you use yellow" personality in him? Was he ever that? Does he believe the lies he tells her? He lies so easily. So does Scarlet.

Julia Fox, who made such a splash (and rightly so) as Adam Sandler's mistress in the Safdie brothers' "Uncut Gems," is at first intriguingly blank. We see her only through the screen, which means we see her through Jack's eyes, we see what she chooses to show him (all of which may be lies, we don't know). About halfway through, we enter her real world, off the screen. Fox, who had such a frenetic ravenous energy in "Uncut Gems," equal to that of Adam Sandler, is almost somnolent here. Her dominatrix personality is believable, presented without pushing or cliches. Fox is fearless. She's confident. Her body language is chill, laid back, and yet her face, in between these moments, is often uncertain. Scarlet is hard to read. Her feelings for Jack, whatever they may be, are also hard to read.

The cam girl phenomenon is a rich subject for exploration. "Cam," a 2018 horror/sci-film film, delved into the creepier aspects of internet sex, and the dangers of creating an internet avatar. "Cam" was written by Isa Mazzei, who was herself a cam girl, and she took a big-picture approach, asking pointed questions about the potential costs of living our lives online. "PVT Chat" doesn't go this route. For the most part it stays on the surface, getting caught up in the characters' financial problems, and their attempts to use one another to get what they need. Deeper, more reflective moments are strangely absent. A friend of mine, who was a sex worker, told me that many of her male clients mostly wanted to talk. In her line of work, she encountered loneliness in its purest and most awful form: the perpetual ache for intimacy, someone who listens when you talk, who asks "How are you?" Jack doesn't have much depth, he's all surface, almost to the degree where you wonder if he is capable of connection at all.

"PVT Chat" has some good scenes, including a wacky section when Jack breaks into Scarlet's apartment, but these scenes just highlight what's lacking. Who are these people? What do they want? What do they need? A really intriguing film exploring all of this, albeit without the cam girl aspect, is 2014's "The Heart Machine," where a guy having a long-term online relationship with a woman he's never met in person, suddenly starts seeing her around the streets of New York. She's been lying to him about living in London. He goes off the rails in every way possible, becoming increasingly unhinged. It's a great portrait of obsession, loneliness, the hunger for intimacy, the devastation of betrayal. It goes where "PVT Chat" can't or won't. 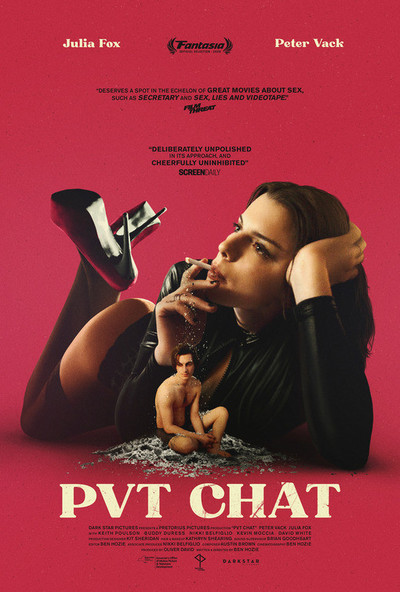