“The Heart Machine” is a tries-too-hard title that sounds like a medical drama or perhaps a robot romance. But it is nothing of the sort. Thank goodness.

Instead, this insightful drama layered with subtle thriller elements aims for the kind of observations that Jason Reitman’s over-reaching “Men, Women & Children” failed to fully fulfill regarding humankind’s emotional disconnection in the midst of a digital media explosion. On the continuum of films about gadget-enhanced lifestyles, “The Heart Machine” lies somewhere between the AOL love letter “You’ve Got Mail” and the more cautionary “Her” on the issue of what effect all this technology is having on society.

He places his trust in a pair of attractive, engaging leads and a bustling though deglamorized urban bubble to do most of the heavy lifting. That his movie easily summons deserved comparisons to “Catfish,” “Vertigo” and even “Blow-Up,” thanks to the underlying tension he builds through his narrative choices and long uncut shots, is admirable indeed.

It is a simple setup, really. Cody (John Gallagher Jr. of TV’s “The Newsroom” and “Short Term 12”) is a 20-something guy living in Brooklyn who is in a Skype-reliant relationship with Virginia (Mumblecore regular Kate Lyn Sheil), who is spending an academic-related six months abroad in Berlin. When we first see them together, there is an unforced attraction between the two save for the fact that she is a face on a laptop screen.

Virginia asks Cody to help her choose between two words for a poem she is writing: fixate vs. obsess. He chooses obsess and thus, her line becomes, “It’s bodies we obsess upon, but the mind’s the prize.”

There is a hint of what is to come both in Cody’s verb preference and Virginia’s phrase. It is not long before we learn he is having doubts about whether she is truly thousands of miles away. After all, they met on an online dating site and have never physically been together.

A little Facebook digging, some replays of background noises heard in Virginia’s supposed European surroundings, a quick check of photos on Instagram, a glance at Twitter entries—it doesn’t take much for Cody to go from slightly suspicious to being as obsessed as James Stewart stalking Kim Novak through the streets of San Francisco.

As Cody’s paranoia continues to grow as he hunts down people in the East Village who might know his long-distance girlfriend, we soon learn that Virginia isn’t exactly upfront about her commitment to him as she uses hook-up apps for one-night stands and flirts with almost every male who crosses her path. Cody even attempts to test Virginia during one of their daily chats by using German words for certain food dishes. Explaining why she doesn’t recognize them, she simply says, “I’m not fat.”

And then something interesting happens as Wigon further pulls back the curtain on what exactly is going on. At first, Sheil with her cruel vamp’s eyes possesses the assured aloofness of a femme fatale while Gallagher naturally exudes the kick-back appeal of a dude next door. Yet our sympathies begin to shift at some point from him to her as Cody stops at little as he creepily invades the privacy of strangers’ cell phones and computers, even picking up unwitting women, to find out the truth about Virginia.

At a certain point, it’s not about saving a relationship between two people who supposedly love each other. It is about not wanting to be duped. Even Cody is confused by his over-reaction but can’t stop himself from finding out the reality no matter how hurtful it might prove to be.

Structure-wise, Wigon probably is too quick to reveal certain key details. I doubt audiences would have minded if he strung us along for a longer period. But both Gallagher and Sheil are fully capable of keeping us invested in their characters, no matter how flawed they might be.

Instead of an explosive climax, “The Heart Machine” quietly winds down by stripping away all the distracting devices and allowing both us and the protagonists to feel first-hand the situation they find themselves in at the end. It is devastating. It is sad. And it may make you want to reach out and hug someone in the flesh. 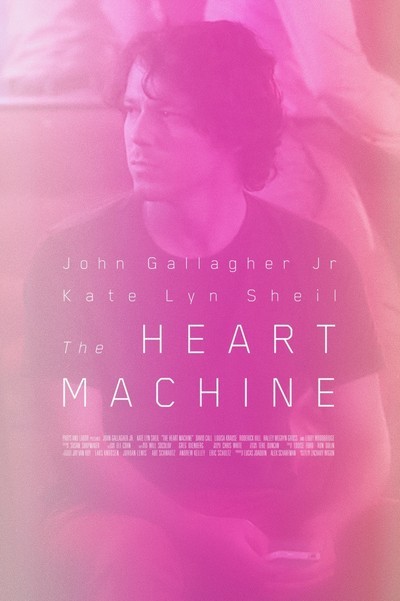